Wholesale Bookbinders, whose address in the 1954 phone book was 35 Eveline Road. It moved to that address from Tooting in 1929 and in 1956 moved to the Willow Lane estate. Listed in the 1963 Borough of Mitcham List of Factories as Bookbinders and Leather Goods at Willow Lane.

Book edge gilding is a dying art
By Wendy Scott

THE centuries-old craft of book edge gilding is gradually dying out. But a Mitcham firm of book¬binders is intent on carrying on the art — using the traditional 22 carat gold leaf.

A section of the modern premises of G. A. Cramp and Sons Ltd., on the Willow Lane factory estate, is devoted to gilding — mostly Bibles, hymn and prayer books.

Two men and a 16-year-old apprentice carry out the various processes — which haven’t altered much for over a century.

Man with a high service record is Mr. V. H. Sutton whose home is in Merton Park. Mr. Sutton has been with the firm for over 20 vears and has practised the trade of gilding for nearly 30 years.

His assistant Mr. George Cowing, who started training in the bookbinding department at the age of 14, has been gilding books for about four years Mr. Cowling’s home is in Sutton.

But the man who has been gilding hooks for nearly half a century retired on December 31. He is Mr. H. M. Cussen. who joined the firm before the 1914 war, when it was confined to small premises in Tooting.

After being demobbed, he carried on his old trade — moving with the firm to larger premises in Gatton Road, Tooting, then to Eveline Road, Mitcham in 1929 and in 1956 to the Willow Lane estate.

The gilders receive the book sections which have been sewn together by machine. These are placed side by side in a press with the pressure altered by a wood screw. The top and sides are then made perfectly smooth and coated with a mixture of red ochre and black lead to close the pores of the paper.

When this has dried, a second coating — this time of egg albumen — is painted on. A delicate operation follows. The lighter-than air sheets of gold, measuring about four by three inches, are carefully placed on to the books with the aid of cardboard.

The cardboard acts as a strengthener until the gold can be manipulated into the exact position.

Then the leaves are burnished and smoothed with beeswax — giving a polished finish and ensuring that the gilded pages (the mark of a high class book) will last a lifetime.

A machine has in the last month been perfected for gilding the cheaper type of Bible — also diaries which the firm manufacture about three-quarters of a million every year.

But tools used in the gilding shop are not the sort that you can buy easily, for most of them are hand-made by the employees.

It’s a laborious task grinding a flint selected from pebbles on the beach, into a suitable wedge shape. A task which the apprentice has been carrying out for nearly six months. And the result? A tool reminiscent of one used by the Romans.

Another stone used frequently is agate. Held up to the light it looks rather like a mottled tortoiseshell. A wedge of iron ore, called a blood stone because of the reddish colour that appears when rubbed on to a wetted surface, also proves useful.

These stones that enable the craftsmen to obtain the best possible gloss and finish, are set into a metal haft attached to a wooden handle.

When the gilding process it completed, the books are taken to the main body of the factory for binding. The high quality Bibles and prayer books have leather covers. The covers are cut to size by a clicking press. Then the edges are pared down so that there is a neat seam when the outer cover is glued to the inside stiffener.

A gauze is pasted on to the spine as a preliminary strengthener. Some of the more expensive books have leather inside and outside while others have a thin card “lining” which is pliable.

The blocking lines — for decorative effect – are made by a heat process which also applies the gilt title line. The “thumb” page indexes are gouged out by a compressed air cutter and then painted with dye by hand.

Many of these Bibles have passed through the hands of Mr. Stanley Cain who joined the firm at the age of 14. Mr. Cain, who lives in Cheam, has been with the firm 14 months longer than his former colleague, Mr. Cussen.

His job is to fit the cover and book together — so accurately that the book lies perfectly flat when opened.

Mr. Cain works swiftly, pasting the two surfaces carefully and then rounding the spine with a few expert taps. After the paste has dried, the heavy weights are removed from a pile of completed books and they are then checked and packed ready for dispatch.

Automation has come to other industries, but not to book binding where even the cheap paper backs need the individual touch — and certainly not to the ecclesiastical section where some of the highly priced editions are handled about a hundred times.

From the Norwood News 29th January 1960 (c) Reach PLC via the British Newspaper Archive. “Pressure applied during one of the gilding processes – using a hand made tool.”

From the Norwood News 29th January 1960 (c) Reach PLC via the British Newspaper Archive. “An operator collects a pile of India paper Bibles that have been folded by machine.” 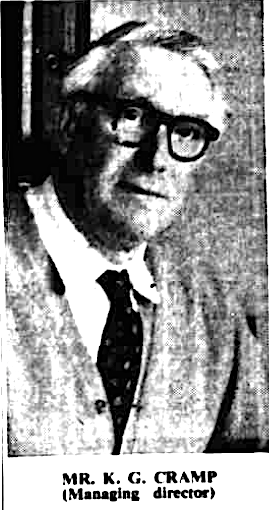