The current police station was opened on Saturday 18th June 1966. The previous building it replaced opened in 1855.

In the 1901 directory it was listed as being the Metropolitan Police Station (W Division) with John Jenkins as station sergeant, with 4 sergeants and 19 constables.

It was announced in 1964, that the building was to be demolished, eighty years after it was built.

POLICE STATION IS COMING DOWN

Work on Mitcham’s new police station has started. For this week a demolition squad moved in to knock down the old station, which dates from 1884.

The squad were expected in October but they didn’t arrive and it looked as though local police would have to put up with their present building for some time to come.

A temporary police station was erected but no signs of the old one coming down were to be seen.

The present station, which overlooks the Cricket Green, will be replaced by a modern building, probably with several storeys.

Work is expected to take 18 months.

Mitcham’s new £98,000 police station was officially opened on Saturday by the Mayor of Merton, Sir Cyril Black. And over 3,000 members of the public toured the station and visited a special exhibition in the car park throughout the day.

“The open day was very successful, far better than we anticipated,” commented Inspector S.W. Brunger, who organised the day with Supt. H.W. Gibson.

He added: “Open days are usually held for particular occasions like an opening. But because the public showed a great deal of interest it is quite possible they will be held more often.”

The opening ceremony was held on the top floor in the canteen. Members from all walks of life were present and Mr Robert Carr, M.P., arrived later.

Sir Cyril Black said he hoped the police would have no work to do in their new station, but if they did it would have a satisfactory completion.

He emphasised the need for the public to see what goes on in a police station and to understand the policeman’s work.

He said: “The police are anxious that their work is fully understood by the public. We must realise the task in which the police are engaged.”

He added: “The public have got to be educated in their duty to co-operate with the police. The task of policemen would be easier if full co-operation from the public was always forthcoming.”

Commander G.C.F. Duncan said the ambition of the police was to show the people of Mitcham what they are paying for and what goes on in the station. He said they wanted to knock down the idea that the police were working behind closed doors. The police had nothing to hide from the public.

“This is the newest police building in South London,” he said, “and it took many years to achieve it, but it has got to last a long time and we hope the public will think the money was well spent.”

Plans for the new station were first under way in 1962 and building started in 1964. It stands on the site of the old station which was built in 1884.

Before the public started to arrive the guests were taken on a tour of the station. They saw the various offices, detention rooms and the cells.

Then in the car park at the rear they saw an exhibition that included a mobile police unit, police dogs and horses, police sports car and a car that was involved in a fatal accident.

The most important exhibition was a special van and equipment used when accidents have occurred and to warn other motorists of the accident and dangers ahead.

Then from lunchtime to well into the evening the public were shown round.

One little girl was so pleased with her visit that she presented the sergeant on duty at the front reception desk with a flower. 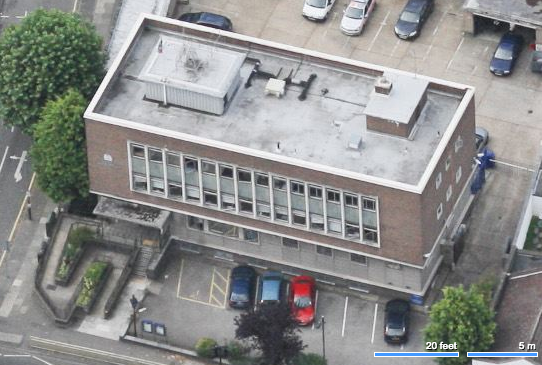 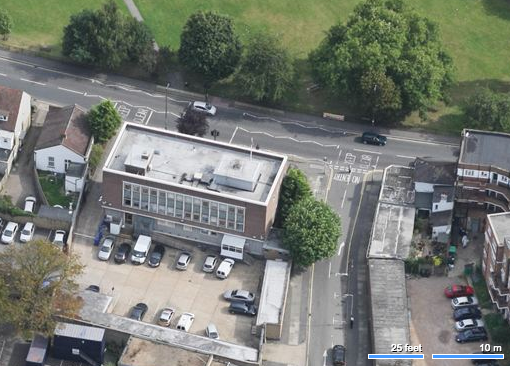 Aerial view showing rear of building. The road on the right is Mitcham Park.