120 to 154 Morden Road, Mitcham CR4 4DB, is a terrace of shops with flats above. It is on the north side of Morden Road, at the right hand side of the entrance to Deer Park Gardens. To its right is Ravensbury Path, which crosses the tram line and connects to Church Path.

The tower is on the west end of the block. It houses the stairwell leading to the first and second floors. Photo taken December 2017.

This is a terrace of inter war shops with flats over, which is built of brick. It is a three storey building, in which the top floor is contained within a mansard roof. The main frontage contains little of particular interest except for the glazed green tiles on the steeper of the slopes of the mansard roof. The end of the terrace has an unusual round tower feature surmounted by a pyramidal roof with the same green tiles. The brickwork on this tower also contains small details of interest. The chimneys at each end of the building are also of some interest, as they follow a curved line at first floor level. It should also be noted that almost all of the original details relating to the shopfronts has now been lost, and that original windows have almost all been replaced. The end elevation which is of greatest interest is disfigured by a large advertising hoarding.

Some of the original wall design is now visible due to changes in signs above the shops. 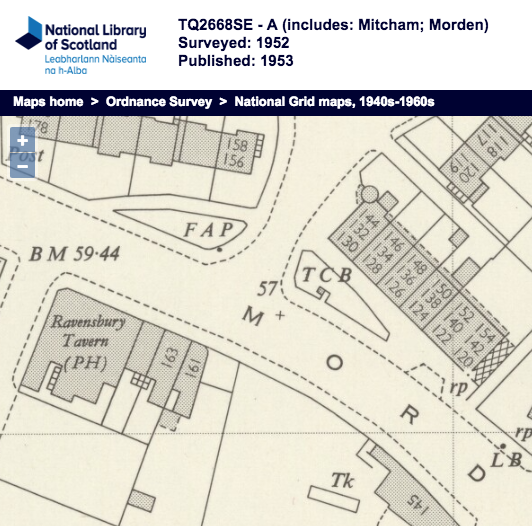