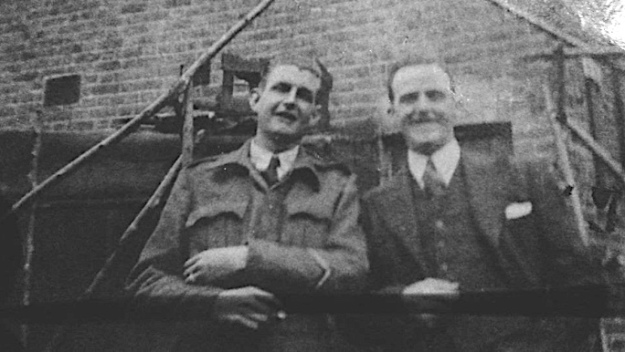 Cyril Bain (on left) with his friend Ernie Simpson (on the right). This photo taken in back garden of Ernie’s mother’s house in Church Road, and was provided by Ernie’s son.

In the 1939 Register he is shown as single, working as a varnish packer, and living in Lansdell Road, Mitcham. As his friend Ernie Simpson (in the photo above) worked at Hadfields paint factory in Western Road all his life, it is likely that Cyril worked there too.

He enlisted on the 20th June 1940, and it is likely he married just before that as his marriage to Emily Martin was registered in the July-September quarter in Wandsworth.

He served with the 1/5th Battalion, The Queen’s Royal Regiment (West Surrey), his service number was 6097793.

He died, aged 28, on 25th October, 1942, during the Battle of El Alamein. He is commemorated at the Alamein Memorial in Egypt.

In his will, he was listed as living at 23 Dahomey Road, Streatham, London SW16. He left £262 16s. 7d. to Alexander McDonald Bain, a police constable.