Opposite the Allen Brothers garage, on the south corner of Broadway Gardens and London Road, was a radio and television repair shop, also owned by Allen Brothers. Established in 1925.

1955 ad that was in the Mitcham Cricket Club Yearbook

200 NOT OUT!
Television? You couldn’t have a better wicket to bat on than BUSH. As reliable for a good innings as W.G. himself, we know from experience how little trouble BUSH sets give. And, after all, we ought to know. We’ve just scored a couple of hundred ourselves . . . 200 BUSH sets installed. And not one of them has given us a moment’s anxiety. That’s why we like you to buy BUSH. We know that BUSH reliability and value can take care of itself. And we know
that you will be pleased and satisfied with the excellent and unfailing performance
BUSH sets give. 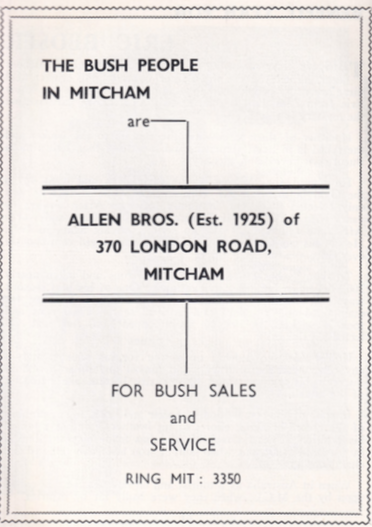 THE BUSH PEOPLE
IN MITCHAM
are

FOR BUSH SALES
and
SERVICE