Angling clubs, such as the Mitcham Angling Society (MAS) and Mitcham Piscatorial Society (MPS) met at local pubs during the season and organised trips out to lakes and rivers for competitions. The MAS, for example, used to meet at the Beehive pub. 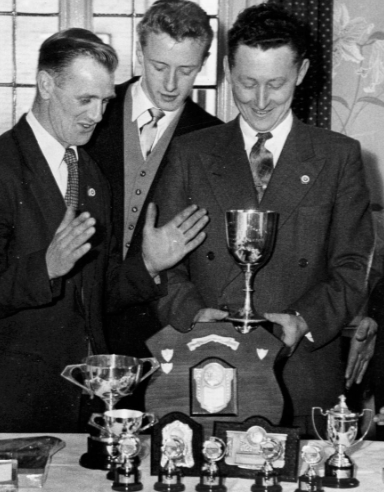 The earliest mention of a Mitcham angling group was in the Fishing Gazette – Saturday 12th December 1885 where Rev. Spencer Gough and H.N. Goodhart, hon. sec. of the Mitcham Angling Association attended the annual dinner of the fly fishers’ club.

The annual match for the Coronation Cup between Mitcham Angling Society and the Piscatorials was held at Burnt Mill, near Harlow.

The cup was won by the Angling Society who also won the three prizes. First for the heaviest catch was Mr Pipkin, second Mr Mott and third Mr Fifield.

Fourteen pounds of fish were caught by members of Mitcham Piscatorial Society when they visited the River Stour at the weekend. Mr. Barfoot had the biggest catch of the day at 4 lb. 5 oz.

THE BEST STORIES CAME AT THE END

THE fishermen of Mitcham kept their best stories until after their dinner on Saturday. Then Mitcham Angling Society members told their tales of the fish that got away. The society’s sixth annual dinner was at Zeeta’s Restaurant, Croydon. Speeches were short. They took up less time than the distribution of trophies and other awards.

Presented to the winners by Mrs. A. Crowson, these included a, ” duck ” shield given to Mr. H Burr, senior, to remind him of the August day last year when he fell in during a fishing expedition. The secretary, Mr. E. J. Harber, reported that the society was in a healthy condition. He thanked fellow officers for their work and regretted the retirement of the chairman, Mr. F. J. Gutteridge, for business reasons.

Anglers net over 30lb. of fish

Fishing on a private stretch of the Thames at Littlestoke, Mitcham Piscatorial Society members caught over 30lb. of fish last weekend. Sunday saw their best catches this season.

Best catch was made by Mr Dowling (roach and bream), Mr Stevens followed with roacg and a fine chub weighing over 1lb.

The newspaper articles below are via the British Newspaper Archive 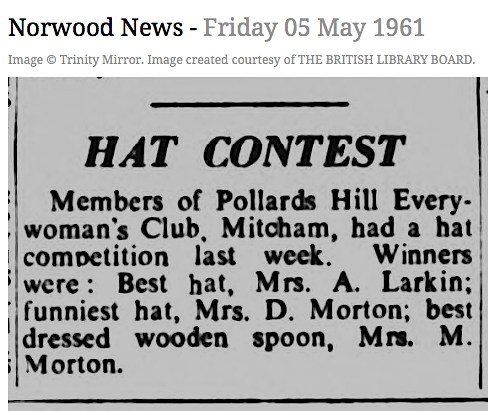