His pre-school years were spent during the difficult time of WW2 but by the 1950s Kenny’s parents had moved to St Mark’s Road in Mitcham.

The young Kenny soon showed his promise as a footballer and joined the Elderwood Boys Club, which was a junior club that fed into Tooting & Mitcham United.

The 3rd May 1956 saw Kenny playing at Sandy Lane for Elderwood against Ditton Old Boys in the North Surrey Minor League Cup Final.

The following year, with Kenny now 18 years old, he was back at Sandy Lane with Elderwood, this time for the final of the Surrey County Youth Cup against Westfield Boys on 11th May 1957.

Although now 18 Kenny did not make his Tooting First Team debut until 1960 due to having to serve compulsory National Service for two years.

Once in Tooting’s first eleven Kenny played around 500 times scoring an impressive fifty odd goals in the process.

He only missed two games during the 1960-1961 season, after his first outing, but was ever present for the next two.

After missing very few games over the next couple of campaigns Kenny was ever present again for the 1965-1966 season. To be ever present in a total of three seasons was an incredible feat in itself but the dedicated club servant was not finished and remarkably he was again ever present during seasons 1966-1967 and 1967-1968 as well.

That hat trick of three consecutive unbroken appearances meant Kenny Holder played a total of five full season during the ten that he took part in which is quite incredible.

In the summer of 1970 Kenny was one of the players who signed for Croydon’s new manager, South London bookmaker Jimmy Rose.

Known then as Croydon Amateurs, this was a step up for the manager, who was successfully running his Sunday side, called Jimmy Rose FC.

Kenny is on the right with a few of his Croydon teammates.

However Rose won two promotions with Holder in his team, but when he left to manage Dulwich Hamlet, age was against Kenny following him to Champion Hill.
Now in his mid-thirties, he remained at the Croydon Sports Arena where he eventually retired from senior football after playing a couple of games during the 1973-1974 season.

Kenny still played Sunday football well into his forties and many a player, whether teammate or opponent, have fond memories of the ageing talent running games from midfield, letting the younger players in his team doing all the running.

However it was at Tooting & Mitcham where Kenny played his best football, gaining London FA and Surrey FA caps and representing the Isthmian League. An England Amateur cap eluded Kenny but he was once invited by The FA to train with the squad but he declined due to the session clashing with a Tooting game. The FA unfortunately took this as a snub and Kenny was never invited again.
The Middlesex Wanderers were happy to have Kenny on board and he represented them on 23rd November 1965 when the touring side played Hendon at Claremont Road.

Kenny’s First Team debut came on 5th November 1960 at Leytonstone when he lined up in a star studded team that included Paddy Hasty and Dario Gradi.
The previous week he had played at Oxford City for the reserves in a game that saw Alex Stepney brought into the Second Eleven.

It should also be mentioned that Kenny once took Alex Stepney’s place in the Tooting goal. Alex Stepney went on the play for Manchester United and is still one of their top ten record appearance holders. But during the away game at Kingstonian’s Richmond Road on 24th November 1962 Alex got injured, breaking his wrist. Kenny went in goal and as there were no substitutes in those days, Alex Stepney played the remainder of the match on the wing. 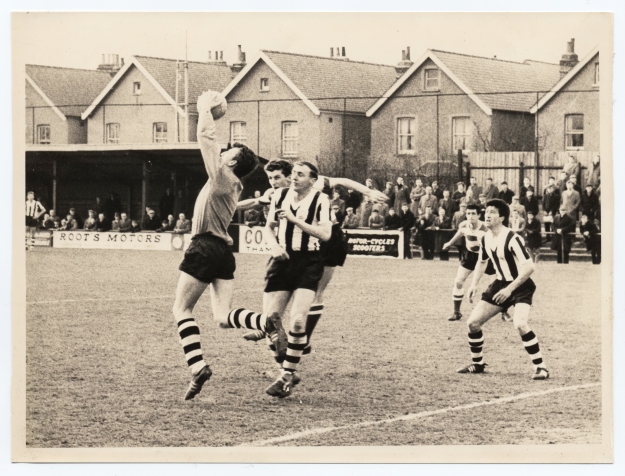 The above photo shows Kenny looking on as Alex Stepney, catches the ball in another away fixture in Kingston. The teammate between them is Gordon Holden who by no stretch of anybody’s imagination looks like Kenny Holder.

Being on National Service with Northern Command in 1959, Kenny decided to throw a sickie in January of that year so he could come home and, along with over 16,000 others, watch Tooting’s FA Cup 3rd Round game with Nottingham Forest.
The game had caught the imagination of the country’s football followers and was filmed by Pathe News.

The Northern Command C/O happened to see the highlights and when he heard the very excitable commentator say the name Holden he then saw left fullback George Edwards and convinced himself that this was Kenny Holder.

The military Police were sent to St Mark’s Road where Kenny was staying with his Mum and Dad and a few red faces must have ensued. Yes, Kenny had thrown a sickie, but to watch the match not to play in it.

A cul-de-sac road that is off of the east side of Caesars Walk, after Walsingham Road. 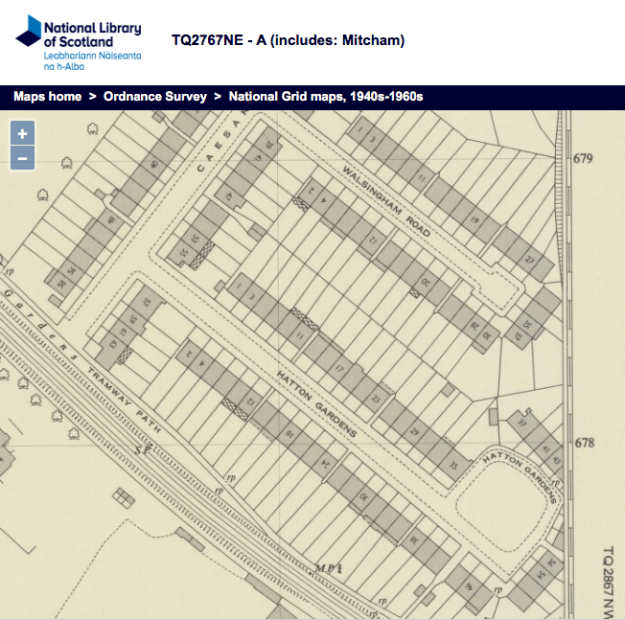 This road, and the other roads between the railway line and the Wilson Hospital were on the former estate of The Cranmers which was bought by Isaac Wilson in 1926. All these roads have names related to Elizabeth I.

As entered from Caesars Walk, the houses on the left, north side, are numbered odd from 1 to 35, with three terraces of six houses each. At the end of the road is a square, offset to the north, with a terrace of six houses, numbered 37 to 47, and then a smaller terrace of three houses, which is at right angles to the rest of the road, numbered 49 to 53. The houses on the south side of the road are numbered even from Caesars Walk end from 2 to 36, also in three terraces of six houses. This is followed by two terraces of three houses each, numbers 38 to 42, and 44 to 46. At the end of the square, at right angles, is a terrace of four houses, numbered 48 to 56.

All even house numbers have the postcode CR4 4LG, and odd houses have CR4 4LJ.

Occupations from the 1939 Register
Duplicates have been removed.