Road that runs south westerly from Cranmer Road to the footpath alongside the tram line. On this 1932 OS map, the footpath is shown as Tramway Path.

Road sign at corner of Caesars Walk and Cranmer Road. The Wilson Hospital can be seen in the background.

The name of the road refers to Sir Julius Caesar Adelmere who, it was believed, had a mansion on the site where the Wilson Hospital is now. In 1598 he entertained Queen Elizabeth I. From this the names of the roads off of Caesars Walk are related to that monarch.

However, Eric Montague, in his book Mitcham Histories:11 The Cranmers, The Canons and Park Place, page 70, says that local records indicate that Sir Julius’s residence was actually south of the Burn Bullock, on the London Road.

Sir Isaac Wilson had bought in 1926 the Cranmers and surrounding land that stretched across the South London and Sutton railway line to the junction of Cranmer Road/Willow Lane with Carshalton Road. He built the eponymous hospital, which opened in 1928, as well as the Garden Village. In between the two he developed Caesars Walk, Burghley Place, Cecil Place, Walsingham Road and Hatton Gardens.

Ad for number 29, on the corner with Walsingham Road, from the Norwood News – Friday 27th October 1933

Road that is the start of the A237 and runs south from the junction with Commonside West, Cedars Avenue and Croydon Road, heading towards Carshalton.

On the west side there is a junction with Cranmer Road and Willow Lane, and on the right just after this is the entrance road to Mitcham Junction railway station and the Mitcham Golf Club. The road goes over the railway and tram lines on a bridge that was rebuilt and widened in the mid 1950s. On the west side of the road and part of the southern slope of the bridge is an access road leading to Aspen Gardens. Further south from here, and set back from the western side of the road is a line of houses that were originally called Rumbold Villas and Tramway Terrace. They are separated by two roads Drake Road and Arney’s Lane. At Beddington Corner is the Goat pub on the corner with Goat Road.

After Beddington Corner, the road is now called London Road and the A237 continues to the A23 at Coulsdon.

Carshalton Road at junction with Croydon Road. The house was one of the Blue Houses. From a Percy Mayhew postcard, from Merton Memories, photo reference Mit_19_1-19

The guide post (marked G.P.) that is on the south side of the tram line in this 1910 OS map is the one seen in the photo. 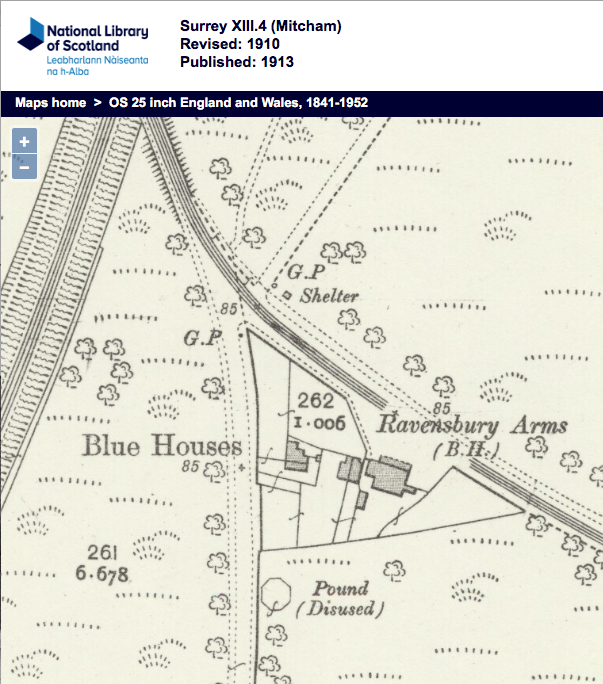 The junction with Croydon Road was changed to a roundabout in 1955.

Work is to start soon on making a traffic roundabout at the busy junction of Croydon Road with Carshalton Road, on Mitcham Common.

The Transport Minister has approved a grant of up to £4,427 towards the cost of the roundabout. Coun. D.J. Hempstead, Highways Committee chairman, said last week that it was hoped that work would be speedily undertaken.

The bridge over the railway line was widened at the same time, the work having been started in 1939 but was interrupted by the war.

On the east side of Carshalton Road, south of the railway station, was a WW2 anti-aircraft gun site. It was cleared in the early 1960s. 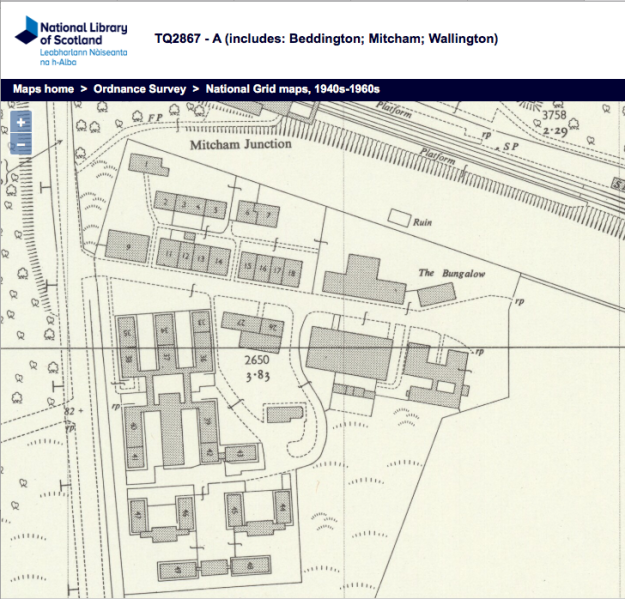 At last – Gunsite is to go

One of Mitcham’s biggest eyesores, the Gun Site, Carshalton Road, Mitcham Common, is at last to be cleared at a cost of about £13,000.

Work on clearing the site is expected to start in about two months time.

The Ministry have approved a tender of £10,800 submitted to them from the Conservators and have further agreed to bear the cost of replacing trees on the site.

This news is welcomed not only by the Conservators but by Mitcham Council and the public.

The Gun Site is one of the few remaining war relics in Mitcham and local people have been pressing for years to clear it.

The conservators hope to replace it with a grass landscape with trees.

In the 1846 Repertory of Patent Inventions, Gerard Andrew Arney is listed as a gentelman, living at Mare Street, Hackney, and his patent for …

The London Gazette, Publication date:23 April 1852 Issue:21312 Page:1163 says that the firm was a partnership name Hammond, Arney and Co. and that this partnership was dissolved:

WE hereby give notice, that the Partnership heretofore subsisting between us the undersigned, under the firm of Hammond, Arney,and Co. Gelatine Manufacturers, of Mitcham Common, Surrey, was, on the 26th day of March last, dissolved by mutual consent.

In the London Gazette later that year, the Patents Act published the patent as number 375 awarded to:

Gerard Andrew Arney, of Mitcham, in the county of Surrey, Gelatine Manufacturer, for the invention of improvements in coating or enamelling pictures, prints, paper, and other surfaces.

The gelatin works, remembered by Cecil Cox from his childhood in the 1840s and 50s, were leased from Cox by Gerard Arney, who, with his mother, Mrs Maria Arney, lived at Willow Lodge at the end of what today is now Arney’s Lane. The factory in 1853 had a wheel developing six hp driven by water conducted from the Wandle at Beddington Corner. Frederick Braithwaite, who visited the premises in the early 1850s, described the arrangements for supplying water to the factory as commencing with two small culverts passing underground before flowing into broad ditches to the north of a triangular island used as an osier bed. There was a fall of 18 inches which, with surface water draining from adjoining land, supplied the mill head. Arney and Company, patent gelatine makers do not seem to have lasted beyond the early 1860s, and the OS map of 1867 marks merely Willow Cottage and what appear to be two small cottages at the end of the lane from the Carshalton Road. All had disappeared completely by the 1970s, when the site was occupied in part by MJ Gleeson Ltd, builders, and partly by C Barber and Sons, haulage contractors.

A sports ground that included a club pavilion that was east of the Corporation Cottages, opposite the Goat pub on Carshalton Road. It was last used by the factory Morfax, which was in Willow Lane.

This OS map from 1954 shows the outline of the pavilion building and the extent of the ground eastwards towards the railway line.

Bing Maps has an aerial view of what is left of the clubhouse and ground.

MER/469/81 : Granted 13 Jan 1983
Retrospective application to erect a single-storey building for use in connection with the football club.

MER/468/81 : Granted 29 Sep 1981
Retrospective applcation for the erection of a standing encosure for spectators on northern site of the Fisher Football Club, Carshalton, Mitcham.

Farm house and land off west side of Carshalton Road, on part of what is now the Willow Lane industrial estate. Also known as Rumbold’s Farm or Rumbold Castle, it dated back to the 17th century.

As reported in the London Evening Standard – Saturday 16 February 1861, the Great Ormond Street Hospital, which had been established in 1852, used its Samaritan Fund to obtain for convalescing children

the renovating influence of sea and country air, and in a large measure the committee were indebted for the opportunity of doing this to the kindness of two friends of the charity, one of whom, at Brighton, undertakes the entire cost of the Home which she has established there, whilst Lady Harding receives the children at a moderate charge of Rumbold’s Farm, Mitcham, a home founded by and still under her management.

The archivists at Great Ormond Street Hospital said that from 1869, the Hospital for Sick Children had its own convalescent home at Cromwell house in Highgate, but prior to that, after opening in 1852, they used the Mitcham home run by Lady Harding and another private home in Brighton. From 1927-83 the hospital had a larger ‘Country Branch’ further out in Surrey at Tadworth Court, which continues to operate today as a charitable trust providing respite care services for children.

Tom Francis took a photo of the farmhouse, which can be seen on Merton Memories.

According to the Defence of Britain Archive, these blocks by the side of the tram tracks were revealed when undergrowth was cleared in 2000, presumably part of the tramlink construction. There are seven blocks, or cubes, on the south side of the track, on the eastern side of the Willow Lane bridge, i.e. the hump back road bridge nearest to the industrial estate.

Photo taken March 2018. On the left is the footpath Foxes Path, the Wheatsheaf.

In the 1971 telephone directory, the company at this address was Bromhead & Denison, “Chems and Mins”, number 01-648 4494. Their name can be seen on this clip from Merton Memories:

Renamed as B & D Clays and Chemicals Ltd., the company moved to Western Road in around 1983, according to a person on the Facebook Mitcham History group. This company currently trades from Willow Lane according to Companies House, which says the company incorporated in 1974.