My father worked at the marzipan makers J.F. Renshaw, Locks Lane, Mitcham, from both before and after the Second World War, where he became an almond grader.

I recorded in audio a conversation I had with him in 2015, when he was 93 years old. He tells what he remembers about the different types of almonds, and their uses. He left the firm in 1963.

Grading the almonds on the top floor at the Renshaw factory, Locks Lane, Mitcham. Possibly 1960.

Roy Hookins on the left, was a life-long friend of my father.

An outing from the firm.

Rubber factory that was on the south side of Morden Road, as shown in this 1953 OS map. 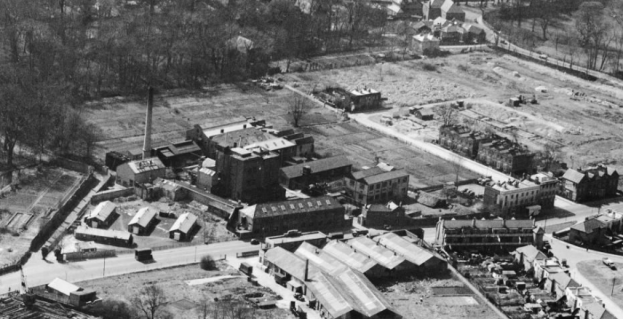 1947 aerial photo, looking south, from Britain From Above

The business moved from Mitcham in 1963 and the factory site is now a trading estate.

it was a big local employer in the 1950s and called workers back to work with an air raid siren.

Also from Facebook, the Leyland Historical Society, in requesting any local knowledge of the Mitcham Rubber Company, said:

Mitcham Rubber Company started in 1916 as a subsidiary of the Leyland & Birmingham Rubber Company, part of the firm that produced latex products before being transferred up to Leyland in 1963

Before 1916, the site was used by W.T. Bigsby varnish manufacturers.

Presiding at the annual meeting of Leyland and Birmingham Rubber Company, at Leyland, yesterday. Mr. Robert T. Byrne said the past year’s profits were £67,239 after providing for excess profit tax, and £27,311 was brought forward. A final dividend on the Ordinary Shares of 10 per cent, was proposed, making 15 per cent, for the twelve months, and carrying forward £25,429. They recieved notice from the Government that from September 1 the works at Leyland and Mayhill, Glasgow, would be controlled under the Munitions of War Act. If they were not controlled many workmen of military age would be taken from them, but they will not now stand such risk. The directors had taken over the Mitcham Rubber Company with a view of capturing a special class of trade which was almost entirely done before the war in England, France, and Russia by the German and Austrian manufacturers. The report was adopted, and Mr. J. T. Goodie was re-elected director.

PURCHASE OF THE MITCHAM RUBBER COMPANY.

They would remember that extraordinary general meeting of the shareholders of the Mitcham Rubber Company was held on June 19 consider the advisability of purchasing the balance of shares in the Mitcham Rubber Company, and letter setting out firstly the reasons for doing so accompanied the notice calling that meeting. The shareholders present at that meeting unanimously decided to purchase the balance of shares, so that the Mitcham Rubber Company was now the absolute property of this company. He proceeded to speak of the branches home and abroad. The home branches – namely, London, Birmingham, Cardiff, Manchester, Glasgow, and Edinburgh, and the Palatine Heel Company — had again, he was pleased to say, done exceedingly well; the result of the trading the Mary Hill Works, Glasgow, had been highly satisfactory, and reflected great credit on the management there. The results of the branches abroad — Johannesburg, Calcutta, and Buenos Ayres — were satisfactory, notwithstanding the great difficulties which had contended with in the way of freight, and especially regard providing their branches with the necessary stocks — their works, as they must be aware, having been mainly employed in turning out requirements for the Government,

Leyland Rubber – a recovery Leyland and Birmingham Rubber reports a gentle recovery from last winter’s recession in Britain, and “for the moment there seems to be good reason to expect It to continue/” That, and the continued development of the South African company, and the transfer of Mitcham Rubber’s production to Leyland seem to augur well for 1963/4.