P.W. IS SPECIALLY FAVOURED, AND SEES THE WHOLE PROCESS OF OILCLOTH MAKING.

Thanks to the courtesy of Messrs. Hampton, P.W. has been through a large factory in Mitcham and seen the whole process of oil-cloth making from beginning to end, from the plain canvas stretched on huge vertical frames sixty-one feet high to the rolling up, ready, one might say, for putting down on your floors.

To start with, the canvas is made in Scotland, and is delivered in whole lengths measuring as much as 145 yards long and six or eight yards wide. It is especially strong stuff woven of yarns made of hemp and flax combined, or jute, or other strong raw material. These fields of canvas are out into lengths to suit the frames, measuring sixty-one feet by twenty-four.

Like stage cloths, they are nailed by the upper edge to battens that run across at the top, being also secured tightly to side frames in order to stretch them.

Now, to render oil-cloth stout, solid, and durable the canvas in the rough_or first state has many coats of paint applied to it, the first coat being quite a pigment in substance, so thick, indeed, that it is actually laid on with a trowel. That is the first process, if we except the sizing. This pigment, or paint, is put on in four sections by “trowellers” who are stationed on one-plank platforms running along the sides of the canvas, the man on the top plank working down as low as be can, the man below him starting where his mate leaves off, and so on to the bottom. Before the first coat is allowed to set hard it is pumiced down to make it smooth and even. Both sides receive at least two coats of this thickish paint., then the upper side is treated with two or three more coats of thin paint, put on with a brush properly; it is then pumiced down again, and a final coat leaves it ready for the printing rooms.

These canvases weigh half a ton, and there was over a mile of canvas being treated at the time of our visit. Our canvas having been left hanging for two or three weeks it is now set hard and dry, so it is ingeniously wound round a roller and taken to the “printeries” where it undergoes that artistic treatment so familiar to our eyes in the multitudinous patterns, and in the working of the hundred and one colours seen in the rolls of oil-cloth you meet with everywhere.

The printing “lofts” harmoniously correspond with the “flies” of a stage; ropes, battens, gridirons, cloths, little gangways, everything, in fact, that one has seen in the place named you come across in the lofts of an oil-cloth factory.

Our canvas being fixed into position, it is allowed to pass over a table twenty-four feet long to receive the impression of the printing blocks. A separate block is required for every colour introduced into the pattern, the blocks being eighteen inches square. In the old days the printer had to use considerable personal force in pressing down on the block to make the requisite impression, but now a hand press, which travels along a trolley fixed overhead, is used.

To proceed : the printer takes up the block he wants, presses it on the pad of colour–the pads are all arranged in order at his book—and then applies it to the surface of the painted cloth. In some patterns as many as ten blocks are used, but the usual number is about five. He goes right across the cloth from one side to the other with one block at a time, and then goes over the same ground again with the second block. this method being observed till all the blocks have been used. The cloth having been printed it is taken to the drying warehouse, where it hangs for several weeks drying, at the end of which time it is varnished and then left to dry for another week or two.

If there was at the time of our visit a mile of canvas and over under the initial treatment there must have been at least five or six miles of cloth depending from the roof of the high building, all being seasoned.

The varnishing process is, of course, simple, but it puts on a smiling face to the cloths which before that treatment wear a sad, dull countenance.

Although the paint used differs in nothing from that used by the ordinary house painter, yet we could not conscientiously recommend you to try to paint your doors with it.

In order to bring their business up to modern wants and usages, a heat-drying warehouse has lately been erected where cloths are seasoned by artificial heat, which is pumped into the rooms by a patent engineering device, the heat being generated by engines in an adjoining building.

Kamptulicon was the pioneer of the new departure in floor-cloths, and was brought into use a little over fifty years ago. Oil-cloth has been in existence since 1745.

Alter kamptulicon came linoleum, about thirty years ago, invented by a Mr. Walton.

From the Kelly’s Directory of 1961

appealed for Mr Orange (38). He was engaged at colour grinding, and they were only half through a contract. They also did work for the Indian Government. A little investigation showed that Mr Orange was really a good “oddman,” and the firm had not another oddman like him. Mr Orange also was quite sure it was impossible for himself to be replaced. It had been tried with old men of 65 and even with feminine material, but the thing could not be done.

The appeal was disallowed, and Mr Orange had to go by 31st December. He was conscripted on 10th December 1916 to the Royal Flying Corps.

Born in Rotherhithe, he was listed in the 1911 census as living in 5 Albert Terrace, Palestine Grove, with his wife Eliza, 33, daughter Florence, 9, and a son, also called Joseph, aged 7.

Eric Montague, in his book Mitcham Histories: 8 Phipps Bridge, page 79, said that he interviewed the works manager in 1966. The manager told him that he had heard it said that the work was originally mostly during the winter months and so local Gypsy and other casual workers were employed.

Montague goes on to say that the gates to the firm had written on them Established 1842, which he doubts, although this photo from Merton Memories taken on 4th April 1974 has copied this as fact.

Varnish and paint manufacturer based at the former Holborn Union Workhouse site in Bond Road/Western Road.

Established in 1853, according to this ad from Grace’s Guide :

Listed in the 1954 telephone directory as 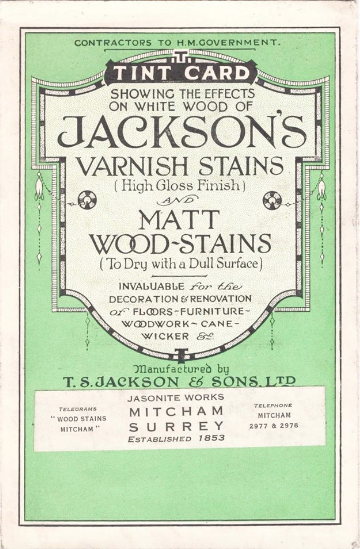