On Monday afternoon the remains of poor James Southerton, the well-known Surrey bowler, were borne to their last place of rest in Mitcham Churchyard, the funeral attracting a large number of persons, who were well acquainted with the sterling qualities of deceased, to the little village green in front of the inn which Southerton tenanted during his life.

The Surrey County Cricket Club was represented by Messre C. W. Alcock, J. Wood, F. Gale, Dr Parrott, E. Garland, G. Wells, C. A. Stein, T. Mossendew, and others. The only one of the county eleven, as now constituted, present was Richard Humphrey, who acted one the pall-bearers, but there were several old players connected with Surrey to show respect to the memory their former comrade, among them J. Swann, W. Shepherd, and W. Mortlock.

The Mitcham Cricket Club, which Southerton was an active member, sent a strong detachment, including Dr Marshall, the president; Messrs Harbor, Compton, Harvey, and about 30 others; and old cricketers unconnected with Surrey, there were also present Edgar Willshier, K. Thoms, T. Mantle, and many others.

Half-past 4 o’clock was the hour appointed for departure of the funeral cortege from the house of the deceased, and very soon after that time the procession made a start. The lane dawn which the coffin passed to the parish church was lined throughout with residents of Mitcham, and the churchyard was already well filled before the service over the body had been completed. There could not have been less than 300 round the grave while the last part of the mournful ceremony was taking place, and doubt whether the pretty little burying-ground has ever held a larger gathering or formed the scene of more impressive picture. The following were told off to act as pall-bearers – R. Humphrey, R. Knight, E. Willsher, T. Sewell, R. Thome, F. Gale, T. A. Mantle, and F. Harwood. The service was conducted by vicar of Mitcham, the Rev. D. F. Wilson. M.A., and will be some little time before the village so closely identified with Surrey cricket will forget the imposing ceremonial witnessed on the occasion of Southerton’s funeral.

A meeting held subsequently at the King’s Head, Mitcham, to consider the advisability of establishing some memorial in remembrance of Southerton as a cricketer. Dr Marshall, the President of Mitcham CC, was the chair and there were in all about thirty present. It was resolved that a local committee be formed for the purpose of providing some memorial to the late James Southerton, and that the committee should communicate with the committee of Surrey County Club to ascertain its views of the character of such memorial. 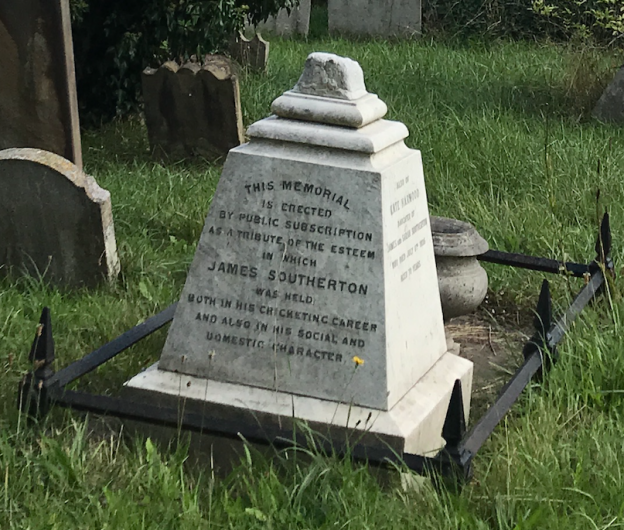 Photo taken 5th September 2020. Inscription reads “THIS MEMORIAL
is erected
by public subscription
as a tribute of the esteem
in which
JAMES SOUTHERTON
was held
both in his cricketing career
and also in his social and
domestic character”

A paperback book is available, published by the Mitcham Cricket Club, about James Southerton, from Amazon.