Road that runs from the east side of Lansdell Road to Laburnum Road. 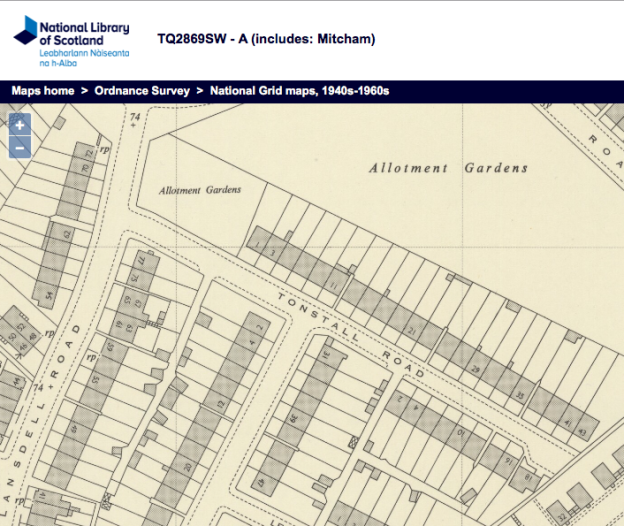 He stands to lose 900 pounds

A 75 year old man battled with Mitcham Council on Wednesday In an attempt to prevent them compulsorily purchasing his land.

Under the Housing Act of 1957 the council have made a compulsory purchase order for a small plot of ground – now used as allotments at the junction of Tonstall Road and Lansdell Road, Mitcham.

But Mr Leonard H. Munday, a retired council officer, appealed against their decision at a public enquiry on Wednesday.

Mr Munday said he thought the council were unjust and unfair. “As a result of their actions I may be deprived of some of my savings that I shall need in my old age” he added.

Mr Arthur Gadd, counsel for Mr Munday said he would be losing £900 by the deal. Mr William Roots, who represented the council said the land will be used as a building site for 8 houses for old people.

“There is a substantial waiting list for this type of accommodation. The availability of land for this purpose Is extremely limited, and this particular site is near all the amenities that old people need,” he said.

“The council regard the provision of houses for old people as a vital service,” he said.

Mr Riley Schofield, the Borough Engineer, told the Ministry of Housing inspector (Mr F. Greaves) that there were more than 340 people waiting for this type of housing. About 173 on the council list and the remainder in houses that were too large for them – “they’re waiting to be moved,” he said.

“Without weighing the scales at all, isn’t it true to say that there is as much need for houses for ordinary people?” asked Mr Gadd.

He decided to sell

Mr Gadd explained that his client bought the land in 1934 hoping to build a house on it for himself. Later he intended building two further houses and letting them.

But the war ended his plans as building costs increased. So he allowed local residents to use the land as allotments without charge.

Mr Munday then decided to sell the land and this year we were met with a building contracting firm in Tolworth.

Mr Philip Ferrer, a director and surveyor for the firm, said they proposed to build 2 semi-detached houses and four terraced houses on the site.

“When my application to build was made I did not know about the council’s proposed compulsory order. I did not know they were even interested in the land,” he commented.

“The real claim is for some compensation,” said Mr. Roots. we can express our sympathy to Mr Munday but we cannot give anything more concrete.”

Mr Munday will lose money if the council allowed to go ahead with their plans because fixed payments will be decided by the District valuer. The compulsory purchase order was made on July 18, but Mr Munday will have to wait several months before he is notified of the Minister of Housing’s final decision.