Short-lived business, who established a factory in 1824, north of Wandle Villa, that employed 150 women for the steam cleaning of linen. The business went up for sale in 1827, and details of the buildings and steam engines used can be found in the auction notice, see below. 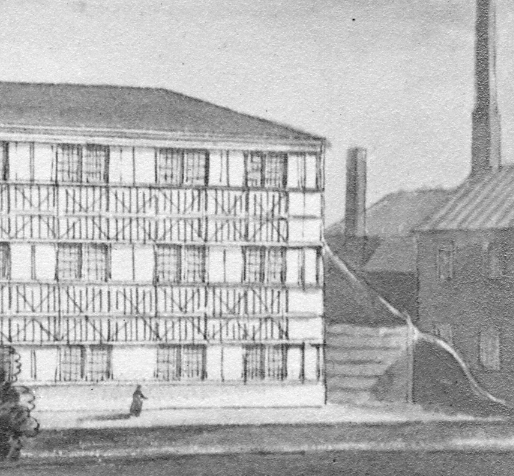 The Proprietors of this Establishment, formed upon the river Wandle, at Phipp’s Bridge, Mitcham, beg leave to submit to the consideration of the Public some the advantages which it presents to their notice.

It has been proved by series of experiments, that steam is the most simple and efficient agent in the cleansing of cotton and linen goods; that it effectually bleaches and renders soluble any oily substance, whilst does not in the smallest degree wear or injure the texture of the cloth. The ordinary practice of rubbing and wringing weakens, separates, and destroys the threads of the cloth, and it sustains greater injury this mode of washing than even its daily use. The expense of the necessary apparatus, and the unskilfulness of servants in tlie use of it, are insuperable objections to the general introduction into private families of a system of Washing by Steam ; and therefore for this mode of washing, a large establishment, constructed upon scientific principles, with all its parts adapted to Use object in view, seems indispensably necessary to secure to the Public all its advantages.

The Public may be fully assured that their linen, in the hands of the Company, is perfectly safe; that it will be regularly received the caravans of the Company, and delivered the third day after it is received ; that it will be dried in wet weather by steam heat, and always perfectly aired, fit for immediate use; that there will a reduction from the prices ordinarily paid ; that the whole operative business of the Establishment will be conducted the most experienced and skilful laundresses, and that no expense will be spared in the getting up of the goods in the most elegant and fashionable manner.

Those families who, with a view to economy, at present submit the inconvenience of washing at home, will find that by sending their linen to this Establishment, they will not only save in expense, but will have their apparel more beautifully washed, and more perfectly got up, than it can be done at their own houses; and at the same time remove the most offensive obstacle to domestic comfort — advantages which every housekeeper will readily appreciate.

The Company rest the success of the undertaking upon its public utility and the good sense of those whose health, interest, and comfort, it immediately concerns.

In answer any objection which may arise as to its injurious effect on those of the poorer classes who make washing by hand their occupation, they beg leave to observe, that the aggregate of labour will be very little diminished, and that the great number of women and children who will be employed, under proper regulations, and with far more comfort than at their own homes, will render it, even in this point of view, a benefit to the Public.

The works are nearly completed, will very soon in operation, the Company beg leave refer those who may wish for any further information, or are desirous of favouring them with their orders, to the offices of the concern, 7, Chatham-place, Blackfriars, or to Phipps’ Bridge House, Mitcham, Surrey, where females of respectability are in attendance to answer any inquiries from ladies.

The Patent Steam Washing Company’s valuable and extensive Premises, Phipps Bridge, Mitcham, Surrey, with two Steam Engines, and all the capital Machinery. By and SONS, At the AUCTION MART, near the Bank of England, TO-MORROW, August 14, at Twelve, in One Lot, By order of the Assignees, and with consent of the Mortgagees.

The valuable and extensive PREMISES, comprising a newly-erected Building, about 214 feet long, and 61 feet wide, situate adjoining to that well-known and fine stream the River Wandle; together with two Steam Engines, one of ten-horse power, and the other six-horse power; seven large washing wheels, hydraulic press of immense power, with ironing and calendering apparatus, and all other suitable fittings and machinery for the various departments, and forming one the most complete Establishments of the kind in the Kingdom; and the whole easily applicable for Brewery, Calico Printing, and many other descriptions of Manufacture. Also, very extensive stabling, coach or waggon houses, yards, &c. The above Premises are holden by lease for 99 years, at £31 10s. per annum. Likewise a new Brick Erection, fitted up Dye-house, containing several large coppers, with leaden cisterns, and other apparatus of the most approved constructions, and upon a very extensive scale ; held for years, per annum; and a field of meadow land, about 15 acres, well calculated for a drying or bleaching-ground, with timber building, about 110 feet long, and 21 wide, fined a canteen, and supplied with suitable cooking-apparatus, and appendages

To be viewed by tickets only, which, with Particulars, may had of Mr. Stole, Solicitor, Merchant Taylors’ Hall; of Messrs. Rankin and Rickards, Solicitors, Basinghall-street; of Messrs. Gregson and Fonnereau, Angel-court, Throgmorton-street; and of Winstanley and Sons, Paternoster-row; Particulars may also had at the Buck’s Head, Mitcham; Greyhound, and King’s Arms, Croydon; the King’s Arms, Carshalton; Spread Eagle, Epsom; Griffin, and Castle, Kingston; of Thomas Winstanley and Son, at Liverpool and at Manchester; and at the Inns in Glasgow.

According to Eric Montague, in his book Mitcham Histories: 8 Phipps Bridge, page 12,

the present bridge, … dates to the mid-1950s and replaced a World War II ‘Bailey’ bridge

In May 2016, the bridge was closed for repairs, and a new bridge was opened in February 2017. See also report by the contractor involved in the restoration.