A crescent, that is nearly a square, road with an island centre, off the north side of Sherwood Park Road in the eastern part of Mitcham. Possibly built in the early 1930s. Houses are numbered odd, clockwise from 1 to 71, and even on the island in the centre, also clockwise from 2 to 28.

The Royal Mail postcode website says that there are two postcodes used in this road : odd numbered houses are CR4 1ND, while even numbered ones are CR4 1NH. 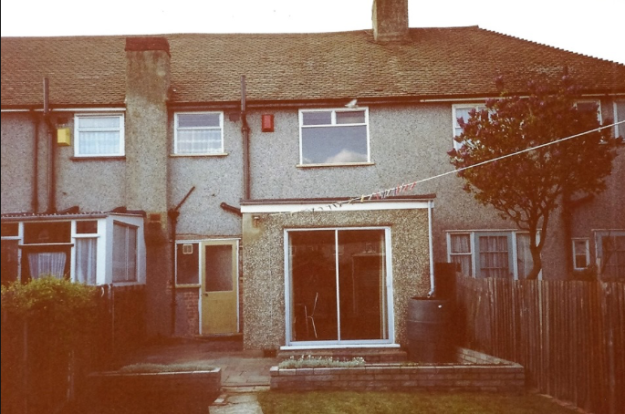 Photo of the rear of no. 10 taken in 1983. Vehicle access to the back was possible and this photo shows a garage on the left. 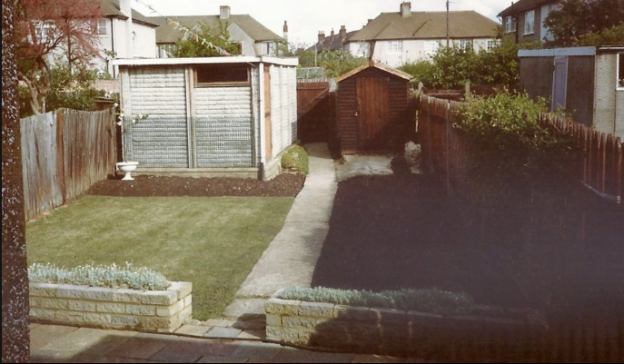 From the Mitcham News and Mercury 1st September 1944, page 1:

In Hospital In Normandy

When Germans Fled They Left Him Behind

Comes to England by Air Ambulance

We are delighted to be able to report that Sergeant-Navigator Peter Heal, whose home is at 65, Greenwood Road, Mitcham, reported as missing on D-Day, is now safe, although injured and in hospital. He was rescued by American troops in the capture of Normandy, and was flown to a hospital in England.

The good news comes in a letter from Peter’s father (Mr J.C. Heal) to the O.C. 1807 Squadron, A.T.C., to which the young fellow belonged.

During the week the good news came to hand that our ex-Flt.-Sergt. Peter Heal is not only alive but in England,, which as yet, make makes remarkable reading.

Sergt.-Navigator Heal as he now is, made his first operational flight on D-Day and his aircraft was shot down over Northern France. Peter was reported missing and not one word had been heard of him since until this week, when his parents, who refused to give up hope received a letter from him posted from a hospital in Lancashire!

In this letter he states that when his aircraft landed he sustained a broken leg and thus became easy meat for capture. The Germans placed him in one of their hospitals in Normandy, and there he remained until August 4th, when the district in which the hospital was situated was captured by the American Army. The Germans in their haste to get away, had to leave Sergt Heal behind. He was gathered in by the Americans, who couldn’t do sufficient for him, and he enjoyed good food and plenty, for the first time for two months.

A few days later he was brought in by air ambulance to an American hospital in England and then later transferred to a British hospital in Lancashire.

Although a bed case, a leg still being in plaster, he writes most cheerfully and hopes once again to be up and doing in the near future .

The news of Heal is a real tonic to the Squadron and must surely cause other parents less fortunate at the moment to once again take heart in the hope that faith and patience ultimately bring its reward.

The 1939 Register shows the occupants at 65 Greenwood Road:

This 1954 OS map shows 65 Greenwood Road as near the junction with Holly Way, and the Church of the Ascension at the corner with Sherwood Park Road.