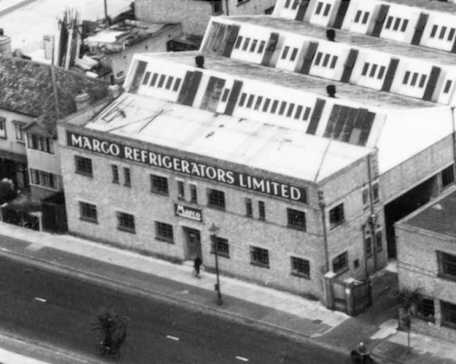 1948 aerial photo from Britain From Above 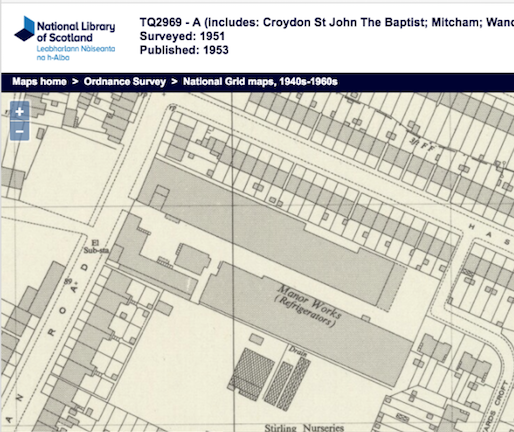 WORKERS FEAR FOR THEIR JOBS

THE 350 employees of Marco Refrigerators Ltd., in Rowan Road, Mitcham, were shocked to learn at the week-end that their company made a net loss of £51,795 last year.

This is in marked contrast to the previous year when a profit of £32,539 was made.

Many of the workers have been asking among themselves: “Will this mean some of us will lose our jobs?”

The management refused to comment this week. but it seems reasonably certain that wholesale sackings will not take place. Shortly before Christmas 29 were laid off because of the drop in orders, but none has been dismissed since.

it is understood that trade is once again improving and according to sales representatives, will continue to go up.

The firm, which makes refrigerators mainly for industrial
and commercial use – a large part of their output goes overseas – gives two reasons for the 1960 loss.

Firstly, the Governments credit squeeze, including the hire purchase restrictions.

Secondly. the need to sell many of their goods at little or no profit to meet “cut-throat competition” in spite of increased material and labour costs.

EVERY STEP HAS BEEN TAKEN

An official statement by Marcos adds: Every possible step has been put into operation by the directors to rectify the position.”

No one at the company would enlarge on this statement. “We can say nothing at this stage,” a spokesman said. Marco Refrigerators are not alone in their poor financial result.

Many other refrigerator firms have been similarly hit.

Big year for the fridge firm

The firm of Marco Refrigerators Ltd. Rowan Road, Long Thornton, are full of new ideas aimed at keeping the company in a good position in a highly competitive industry, says the chairman, Mr Edwin G. Batt.

In his annual statement he refers to the past year as a ”phase unprecedented in extent.”

“Never before has the company in such a short space of time completed preparations for launching so many new models.”

These included frozen food display cabinets and an entirely new range of ice cream conservators. Considerable cost has been involved in their development.

Mr Batt adds: ”I would like to extend to all employees, whatever their duties or degrees of responsibility during this momentous time, our warmest appreciation of their efforts.
.
“In the face of great problems, trials and temporary setbacks they have come through smiling.”