Pub that stood on the south side of Croydon Road near the junction with Carshalton Road. It was next to the Blue Houses, and so was also known as the Blue House pub. These blue houses were possibly built to house workers who built the Surrey Iron Railway at the beginning of the 19th century. One mile further along this Croydon Road, towards Croydon, stood the Jolly Gardeners which was known as the Red House. The bridge over the railway line is called Blue Houses Bridge.

The original wooden building was replaced by a mock Tudor one in 1906.

It is assumed that the ‘VP’ refers to the company’s directors Vidur and Parin Patel. Currently, in 2017, the pub is an Asian restaurant and night club, called The Ravensbury. 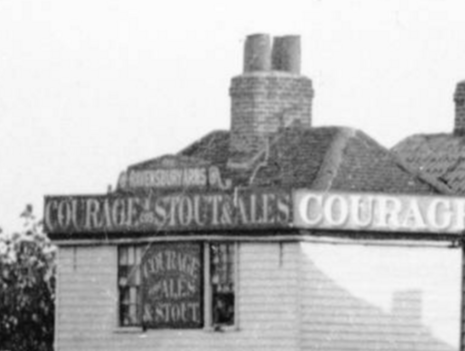 Ravensbury Arms owned by Courage Brewery. This clip is from Merton Memories photo 33324 and is copyright London Borough of Merton

Ravensbury Arms when owned by Nalder & Collyer. This clip is from Merton Memories photo 33112 and is copyright London Borough of Merton 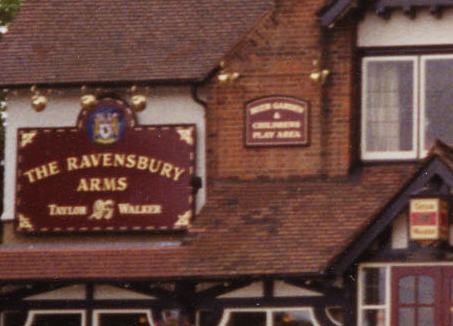 Ravensbury Arms in 1989 when owned by Taylor Walker. This clip is from Merton Memories photo 49013 and is copyright London Borough of Merton. 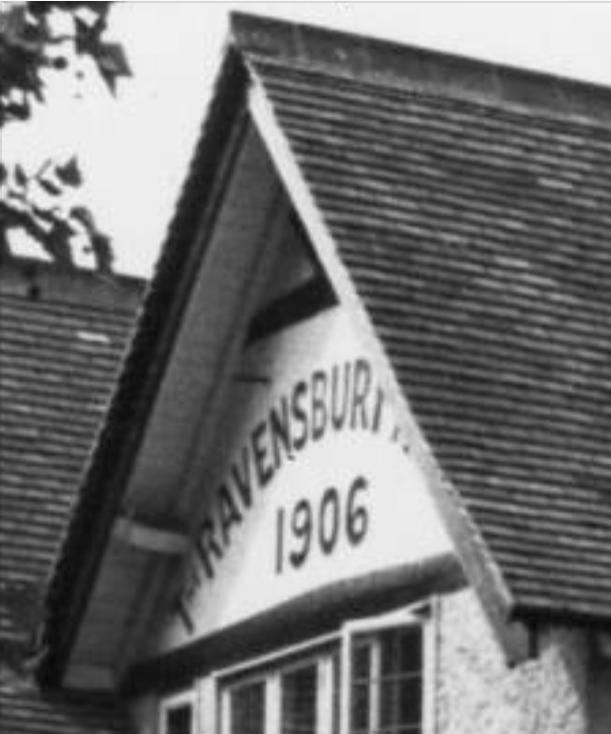 The ‘1906’
shown was when this pub was rebuilt. Clip from Merton Memories photo 49027 and is copyright London Borough of Merton. 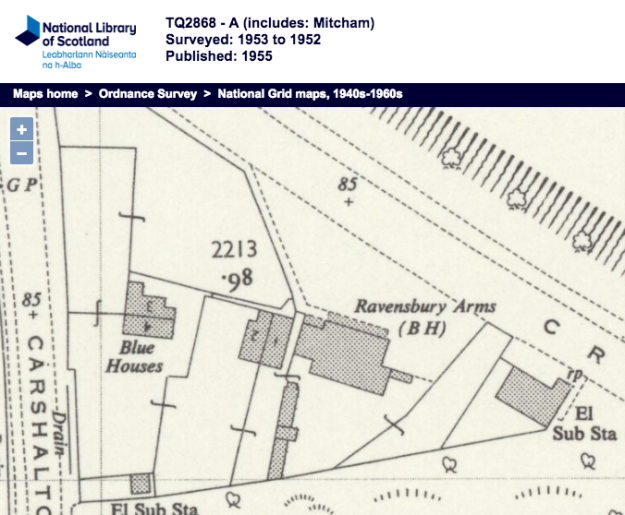 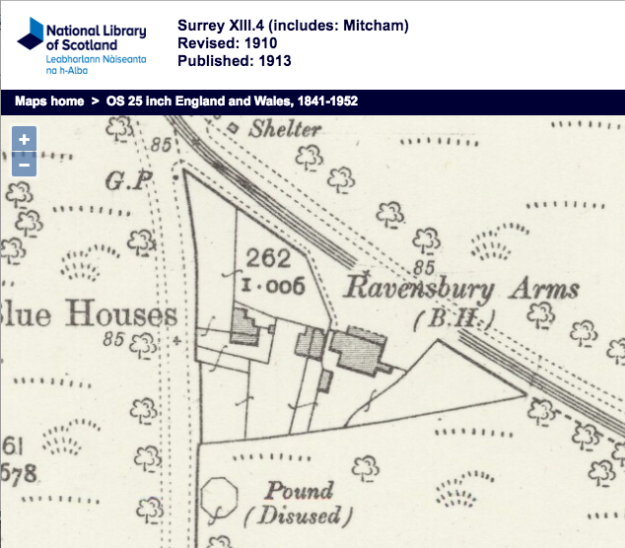 From the Norwood News – Saturday 13 June 1868, via the British Newspaper Archive

Thomas Bennett, landlord of the Ravensbury Arms, Mitcham, was summoned for assaulting one Fanny Franklin, the wife of a blacksmith, at Mitcham, on the 28th May. It appeared that a little boy named Newman went to the defendant’s house for some beer, with which he was served. Just as he had left the house he was molested by the complainant’s son, and according to her version of the tale, he struck the lad, who ran away, pursued by the defendant, who caught him when near his mother’s premises, and again beat him. Mrs. Franklin came out, and the defendant not only abused her, but struck her in the nose, and forcibly held her arm, causing her much pain. She called two witnesses, one of whom clearly proved the blow on the nose, and said that defendant struck at Mrs. Franklin’s face twice.—For the defence it was alleged that young Franklin struck and kicked the little boy Newman on two separate occasions, and it was solely for the purpose of protecting Newman from the other boy’s violence that he went out of his house. He denied that be had struck Mrs. Franklin in the face, and said she came out of her house with a hatchet in her hand, and flourished it in a menacing manner ; therefore apprehending violence be took hold of her arm. During this time she called him a thief and a pickpocket, and said she could name the gentleman whose pocket he picked. Of course (said the defendant) I was much exasperated, but I did not abuse her beyond advising her to go home and wash her face, neither did I strike her with my closed fist ; had I done so, there would now have been some marks of the blow. The defendant called a witness who was in his house at the time, and who seemed desirous of impressing upon the Bench that he had attended to tell the truth, and that he was not biassed in any way. He said he saw the whole transaction from beginning to end, but singularly enough he did not see Mr. Bennett strike Mrs. Franklin, although be heard her call him all kinds of foul names. The Bench said they were bound to believe the evidence that had been adduced on behalf of the complainant, and further, they considered that the assault had been satisfactorily proved. The defendant would have to pay 20s. and 19s. costs.—The money was paid.