Pub on Morden Road at the eastern corner of Ravensbury Grove, which was possibly built prior to 1869 as it was licensed before then. It was demolished in the late 1990s and replaced by a block of flats.

In 1936 Nalder & Collyer sold the leasehold to Ind Coope & Allsop.

A photo on Merton Memories shows the pub when it was called the Ravensbury Arms, and the brewer was Young & Bainbridge: 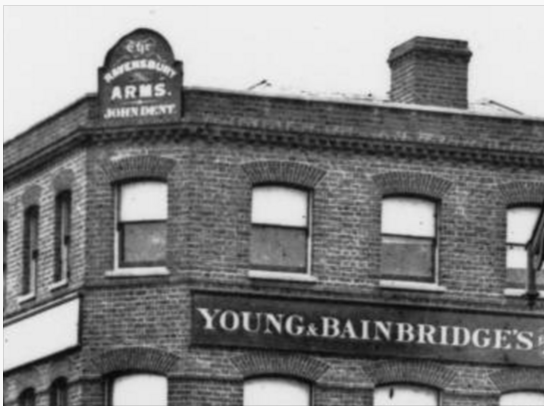 c. 1900. This clip is from Merton Memories photo 33235 and is copyright London Borough of Merton.

— The license of the Crescent Arms Inn, Whitehorse-road, Croydon, was transferred from William Hall to Benjamin Haley, Bow-common, London.

— The license the Ravensbury Tavern, Morden-lane, Mitcham, was transferred from John Dent to Thomas Sayers, of Church-road, Mitcham.

The 4th November 1876 issue of the same newspaper says that John Dent took up the license at the Gorringe Park Hotel.

Thus the photo on Merton Memories is from before October 1876.

In the Licensed Victuallers records of 1903 it was shown as fully licensed, and having been licensed before 1869. The owners were Nalder & Collyers Brewery Co., Croydon, to which the pub was tied for draught beer. The name of the licensee was Richard Evans who resided on the premises. Six bedrooms were available for the public and there was stabling for 1 horse. Bread and cheese was available. There was also a urinal and w.c. It served the ‘ordinary class trade’.

This clip is from an undated photo of the pub on Merton Memories. The walls of the upper floors have been rendered. The brewery owner is shown as Taylor Walker. This dates the photo as between 1979 and 1999. 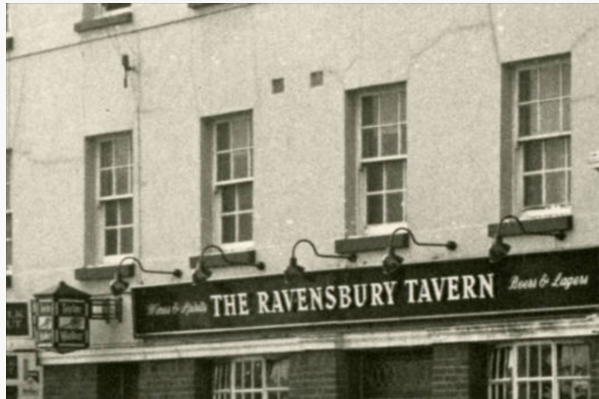 Aerial photo of 1947 from Britain From Above:

Helen Osborne’s book Inn and Around London – A History of Young’s Pubs, page 6 : re Young’s partnership with Bainbridge.