Road off of Love Lane. Council Minutes use two spellings “Taffys How” and “Taffy How”. Note no apostrophe. The OS map for 1953 shows it as Taffey’s How. 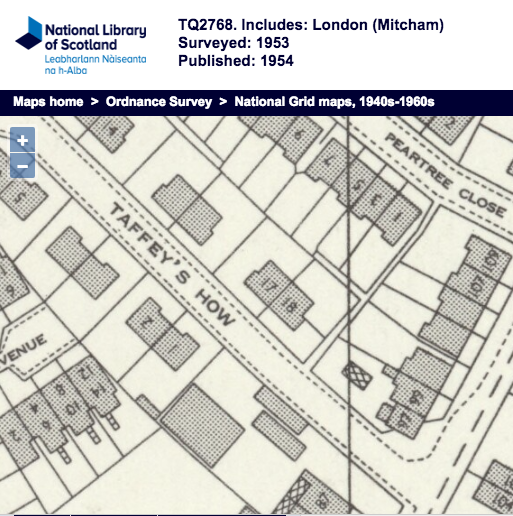 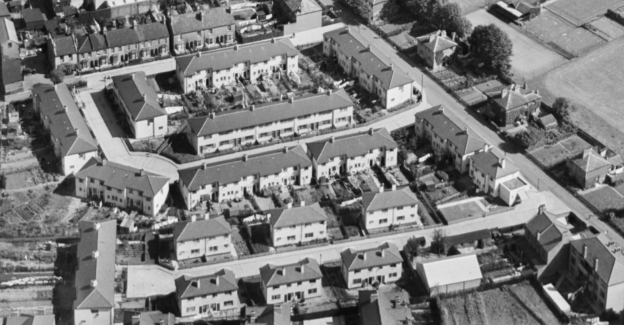 1937 aerial photo from Britain From Above. Taffys How is the short road in the foreground.

A strip of land 0.6 acres was bought from Messrs Mizen Brothers, market gardeners, in 1935 by the Borough of Mitcham, for £975. It was developed for social housing. Inflation adjusted this is around £63,000 in 2016.

Accompanying this report we beg to submit for your approval a preliminary sketch lay-out for the site acquired from Messrs. Mizen at Taffys How, Love Lane, immediately adjoining the Pear Tree Close housing scheme.

The area acquired is 0.600 acres. It is outside the area of the Town Planning Scheme and consequently free from restrictions of density. Adopting the same density figure as was taken in the case of Pear Tree Close, it should afford sites for 12 houses, and this is the number which we have shown on the plan upon the assumption that is to be developed to its utmost capacity.

It is a long and very narrow strip of land, with a very short frontage to Love Lane, and the only way in which the utmost use may be made of the land is to drive a road along one side of it as shown. This will be a 24 feet road with turning space at the end. While in this position it will also be available for the development of the adjoining land, which is not your property, it is, in our view, preferable to placing it on the other side of the site, when the new houses erected upon it would look out on the backs of the Pear Tree Close houses.

As regards the type of houses to be erected, the two blocks of three in each we propose should be exactly similar to those already erected on the Pear Tree Close estate; for the remainder of the houses the shallow depth of the sites calls for wide frontages, shallow depths, and the provision of some garden space at the sides. We show in the sketch the plan we suggest, which will provide similar accommodation to the other houses included in the scheme.

we are, ladies and gentlemen,
Yours obediently,
Chart, Son and Reading.

“Taffy How,” Love Lane. – The Town Clerk reported that the District Valuer was prepared to support an application for loan for the purchase of “Taffy How” from Messrs. Mizen Bros. at the price at which the Council had acquired the same. Resolved, That the Finance Committee be recommended to submit an application to the Minister of Health to borrow the sum of £975 for the acquisition of the land known as “Taffy How,” Love Lane.

Eric Montague says the origin of the name is unknown but that it was an alternative field name for an inclosure off Love Lane called Barn Field which was part of property owned by an Andrew Feltham, as documented by Edwin Chart in 1827. The details are held at the Surrey History Centre.