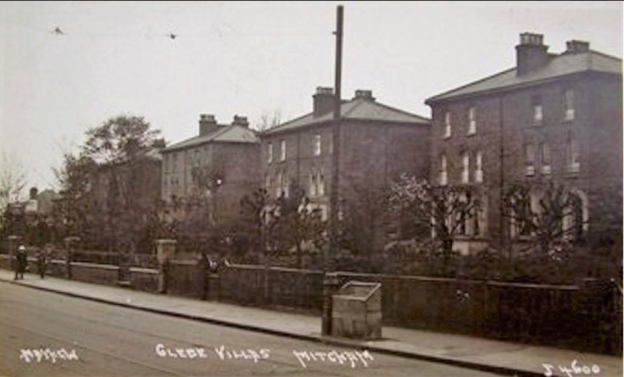 Possibly built around the 1870s, there were six pairs of semi-detached houses along the west side of London Road. They were numbered northwards from 1 to 8, and 11 to 12. The gap between 8 and 11 was filled by a pair of semi-detached houses called Thrushcross and Hayworth which were built later by Athel Russell Harwood. He lived in Thrushcross and sold the other. They were destroyed by a V1 bomb in 1944. The names Thrushcross and Hayworth are taken from street directories and the 1911 census. Eric Montague, in his book Mitcham Histories : 12 Church Street and Whitford Lane, page 108, referred to these houses as Thrushcroft and Athelstan.

In this amended OS map of 1910, the house called Raydon is now number 326 London Road, which was later renamed Kellaway House.

An article in the Mitcham Advertiser, 16th October, 1952, on page 1, lamented the loss of village relics, including the Glebe Villas, which were cleared away for the Glebe Court housing estate.

A row of three-storey, roomy and dignified semi-detached houses of the Victorian type, with bay windows, were built by George Hills, who was born in the Elizabethan house that once stood opposite Hall Place. Bricks used in Glebe Villas were made in Mitcham.

George Hills was the father of the last of the beadles of the parish and Parish Church.