Parish church. 1819-22, with medieval fabric in tower base. George Smith, architect. Roman cement render with some Bath stone dressings. Slate roof, pitched to parapet. 5-bay nave, aisled and with clerestorey; chancel arch to 2-bay sanctuary flanked by chapels. South east tower of three stages with oculus to first floor and 2-light bell louvres above, crenellated parapet and octagonal corner turrets. 5-light east window with reticulated tracery; the other windows Perpendicular and culminating in spectacular five-light Perpendicular west window. Grotesque label stops to aisle windows. Interior has tall arcades with clustered columns from which rises lierne plaster vault of remarkable charm and elegance. Rear gallery, modified in 1869. 1820s font. Reredos of 1899. Monuments include that to Sir Ambrose and Lady Crawley (d.1713 and 1727) by Gibbs and Rysbrack at the west end; to John Hyde (d.1810 ) by Rouw; tablets to the Tate family by Charles Harris. War memorial with central panel of St George and the Dragon by Martin Travers. An early example of a Gothic Revival church in a pure Perpendicular style. George Smith was long the architect to the Mercers’ Company and had an interest in designing his churches in varying historical styles. This is his exemplar in Perpendicular.

built by John Chart to the design of George Smith, FSA, FIBA, soon attracted both criticism and praise … master builder and undertaker, parish clerk and vestry clerk … his son Edwin was apprentice carpenter

Drawing from a planning application: 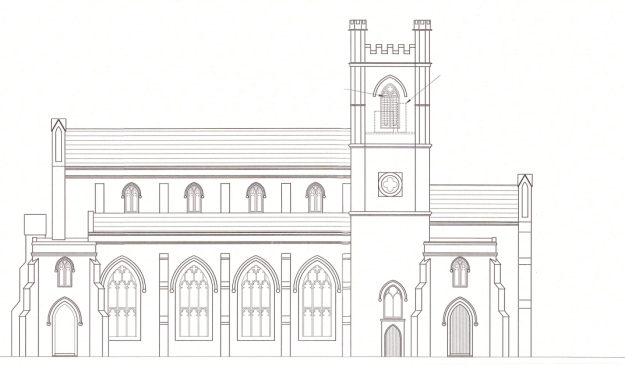