A letter was read the Clerk from the Mitcham Parish Council asking the Rural District Council to raise the necessary money for the supply and fixing 100 fire hydrants in the parish of Mitcham. The Clerk stated that the last time the Council pur chased such hydrants, 86 of them cost £690. It resolved to accede to the request, the Clerk adding that the money would be raised by loan and charged on the revenue of Mitcham.

The Superintendent’s Reports were read:

The Superintendent submitted the following statement as to the result of testing of the pressure and flow at various hydrants.

Minutes of meetings held by the Mitcham Parish Council are available on request from the Merton Heritage and Local Studies Centre at Morden Library.

After working as an accountant and then salesman with various paint/varnish companies in Magdeburg, he set up a company with a colleague in 1873 called Blume & Knopf. The company quickly grew from modest beginnings to become well-known market leaders for high-quality paints and special varnishes, which were used for coaches, cars, bicycles, sewing machines, paper mills and a wide range of other industrial products. In 1875 he set up on his own, using land bought in Magdeburg, trading as Carl Hans Blume, Lackfabrik, which supplied the German navy, military and state works, railway companies and many other industrial enterprises on a large scale. In addition, he was able to start exporting its products to European countries at an early stage. In the summer of 1893, a first branch factory was erected in Mitcham, followed by a branch office in Paris before the First World War.

Source: University of Magdeburg biography on Carl Blume (in German)

From the 1912 Directory & Chronicle for China, Japan, Corea, Indo-China … 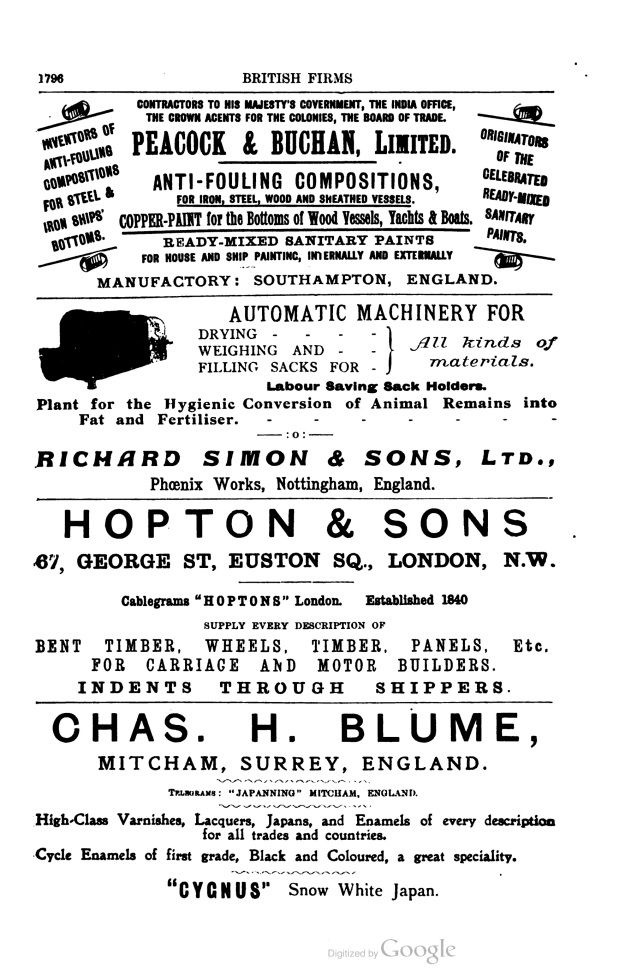 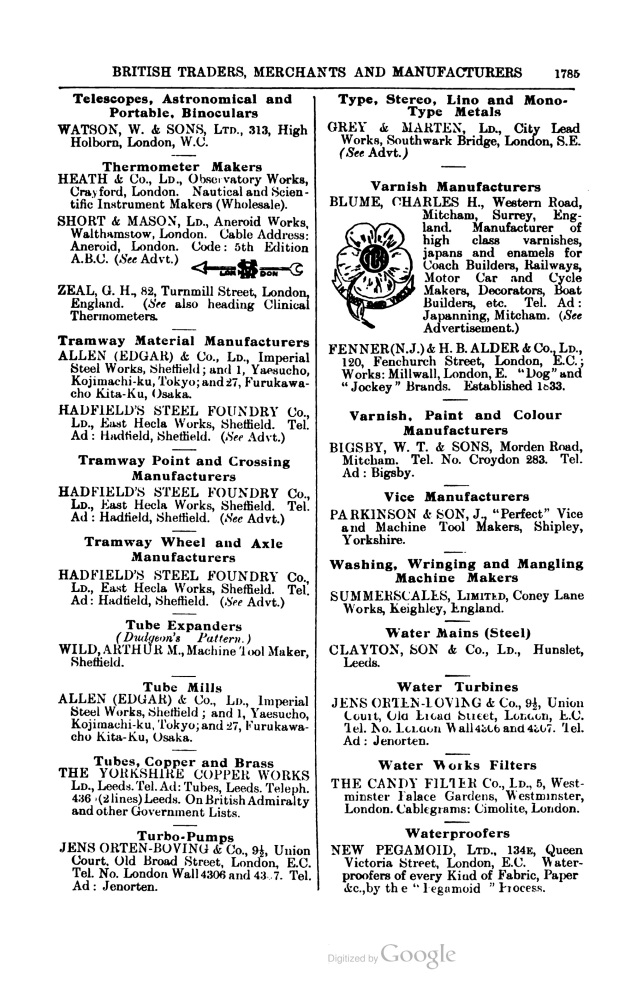 Owner of varnish factory in Western Road that was closed down and sold off at auction in 1916.

From the 1910 Cycle and Motorcycle Exhibition on Grace’s Guide

This firm is famed for brilliant and long wearing enamels, and some very fine samples of cycle stove enamels, black and coloured, mudguards and gear case enamels, silver paint, air drying enamels, etc. One of the firm’s latest lines is the “Marrow Grey” and “Bamboo” rust proof priming ; it should be noted that the use of these rust proof primings does not exclude the use of the ordinary rubber or first coat black enamel, which may still be used as an intermediary coating, but is not necessary ; two coats of finishing for the rust proof metallic priming gives very excellent results and a very fair finish is obtained with one coat of black for the priming ; a point in favour of the priming is that it “carries” or “fills” better than the ordinary black first coat, and is equivalent in bodying up to two coats of ordinary enamel.

We learn that tubes treated with this rust proof priming have been exposed continually to rain and damp for six and eight months without any lifting taking place.

This exhibit is certainly one of the most interesting and instructive in the Hall.

Allow me to express to you once more my feelings of indebtedness and sincere recognition for the very prompt effective assistance which you and your men have rendered to us on Thursday last.

As the outbreak occurred at night time the extent of the fire would indeed have been quite disastrous, but for your timely and efficient help.

Please be good enough to convey these sentiments to your men and express to one and all of them my grateful thanks.

The Superintendent’s Reports were submitted

The Superintendent reported that an additional fire hydrant is required near Mr. C. Blume’s factory, and the Committee recommend –

That the Croydon Rural District Council be requested to fix the hydrant in Western Road.

under the Trading with the Enemy law, citing Charles H. Blume as an enemy.

TRADING WITH THE ENEMY AMENDMENT ACT, 1916.
Orders have been made by the Board of Trade requiring the undermentioned businesses
to be wound up : —

WHEREAS by Order made by the Board of Trade, dated the 9th June, 1916, under the
provisions of the above mentioned Act, the business carried on in the United Kingdom, of the above named Charles H. Blume was ordered to be wound up, notice is hereby given, that any persons claiming to be creditors of the said business carried on by the said Charles H. Blume who have not already sent in their claims are required to send, by prepaid post, to John William Barratt, Chartered Accountant, of 19a, Coleman-street, London, E.C., the Controller appointed by the said order, on or before the 16th day of November, 1916, their Christian and surnames, addresses and descriptions, with full particulars of their debts or claims, or in default thereof they will
be excluded from the benefit of the said order.
—Dated this 10th day of October, 1916.
J.W. BARRATT, Controller.

IN the MATTER of the TRADING with the ENEMY AMENDMENT ACT, 1916, and in the MATTER of CHARLES H. BLUME, WESTERN ROAD, MITCHAM, SURREY.

By an Order of the Board Trade, dated 9th June, 1916, under Section 1 the above-mentioned Act, relative to the above firm, I, the undersigned John William Barratt of 19a, Coleman Street, London, E.C., Chartered Accountant, was appointed to control and supervise the carrying out the said order and to conduct the winding up of the firm’s business.

Notice is hereby given that the Creditors the said firm are required before the 25th day of August 1916 to send their Names and Addresses and the particular, of their DEBTS and CLAIMS the names of their Solicitors (if any) to me the undersigned Controller at address aforesaid and required notice writing from are their solicitors or personally to come in and prove their said Debts or Claims at time and place as may be specified in such notice or in default thereof they will be excluded from the benefit of any distribution made before Debts are so proved.

Re Chas H. BLUME. VARNISH MANUFACTURER, MITCHAM. SURREY. By Order J. W. Barrett. Esq., F.C-A., the Controller appointed by the Board Trade Messrs, Fuller, Horsey, sons, & Cassell, having Disposed the Freehold Works and the Goodwill of the Business, will Offer for Sale by Auction lots the Premises, Western Road. Mitcham, on FRIDAY, October 13, 1916. 1030 o’clock precisely.

May be Viewed Two Days Preceding and Morning of Sale, and Catalogues (when ready) may be had of Messrs. Nicholson, Graham and Jones, Solicitors, 24. Coleman Street. EC.; Messrs. J Barratt and Co.. Chartered Accountants. 19a. Coleman Street. E.C, and 75. New Street. Birmingham; or Messrs Fuller, Horsey, and Co.. 11, Billiter Square. E.C.