Westfield Road is off the west side of Love Lane, near to its Western Road end. It runs from Love Lane in a line parallel to Western Road. At the end of the road is a footpath that connects to the Field Gate Lane footpath, which runs along the side of the Gas Works site.

The road has a total of 24 houses, which were built in three separate periods.

As seen from Love Lane, there eleven houses on the right, which are from around 1890. A block of six houses on the left, were built in 1934 when Pear Tree Close was built. In around 1986/7, the road was extended to the right at its western end to run parallel with Field Gate Lane, and a block of seven 2-bed, 3-storey, town houses, with integral garages, were built. They are numbered 40 to 46 sequentially and have the postcode CR4 3AL, whereas the earlier houses numbered from 1 to 17 all have the postcode CR4 3AT.

Occupants in the 1904 street directory
From Love Lane, these houses are on the right hand side:

Occupants in the 1896 street directory

The road isn’t shown in the 1891 directory, and this OS map of 1894 shows the terrace of houses, but the road isn’t named.

The 1951 OS map shows the addition of houses on the left hand, or southern side of the road. These were numbered from 12 to 17 sequentially. 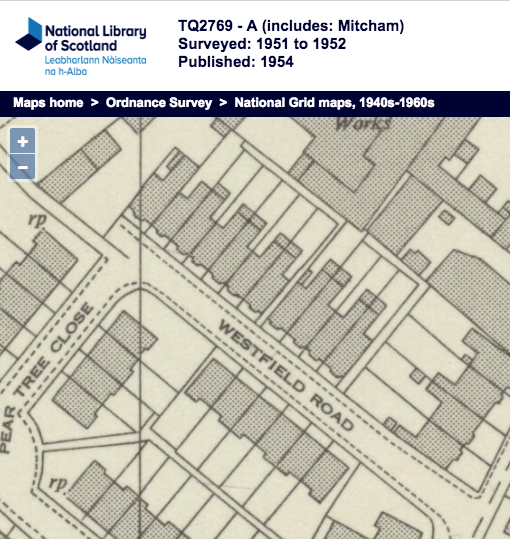