Twenty-five years as a fireman ended on Friday for Mr Terry Tilley, Russell Road, Mitcham. Here (centre) with his wife he receives a clock from Station Officer P. Dann, and an illuminated address signed by all members of the station.
All his colleagues also subscribed towards the cost of the clock.
From the Mitcham News & Mercury, 12th February, 1965, page 1.

Enjoyed his 25 years of fire-fighting

The summer afternoon when a rubber dump started to smoulder in the Willow Lane was the start of the biggest fire in Mitcham since the war.

Mr Terry Tilley recalled the blaze this week as he sat in his Russell Road home and looked back on 25 years as a fireman.

“It was two or three years after the war,” he said, “and I remember it was very, very hot.

“Tons and tons of rubber went up and you could see the flames miles away. It was like a mushroom.”

Long into the night 40 engines and dozens of firemen fought the fire, one of a spate of rubber dumps which went up the London area.

Of his experiences during the war Mr Tilley most vividly recalls a bombing raid on London’s dockland.

Fire engines raced from all over London to fight the blazing oil and tar refineries at Silvertown.

“The raid began in the afternoon,” said Mr Tilley, “and about 8 o’clock the bombers came back and went on dropping until the early hours of next morning.

“It was a fantastic sight with the fire engines and A.R.P. units all over the place. We lost a few men, I think, when the bombers came back.”

“Mr Tilley, who is 55, joined the Mitcham Brigade in 1940. In 1946 he moved to Banstead for nine years before returning to Mitcham.

He didn’t join for any particular reason, but now he says: “I enjoyed the life, and I shall miss the men.”

For the future he intends to have a few weeks’ holiday and then get another job, though he is not quite sure what.

There are photos on Merton Memories of the rubber tyre dump fire on 2nd June 1947. For example: 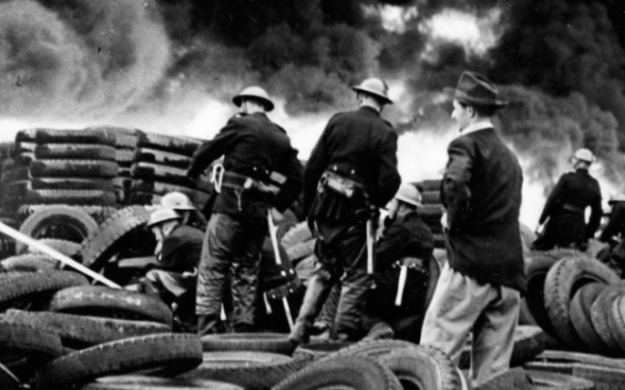 Alfred Tilley, also at the Mitcham Fire Station, was his uncle, according to a post on Facebook. He is pictured on a 1930s photo of the brigade. He was mentioned in newspapers as having rescued 15 cats over his career. 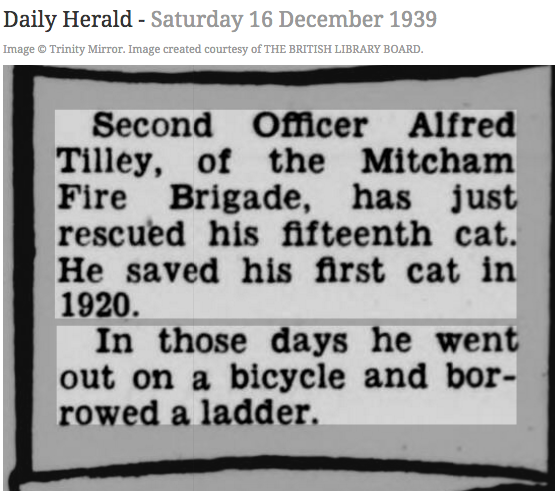 Second Officer Alfred Tilley, of the Mitcham Fire Brigade, has just rescued his fifteenth cat. He saved his first cat in 1920. In those days he went out on a bicycle and borrowed a ladder.
From the Daily Herald, 16th December, 1939.