Sir Thomas Cato Worsfold, 1st Baronet DL JP (14 February 1861 – 11 July 1936) was a British baronet and politician. He gained an LLD from Trinity College, Dublin and in 1918 he was elected as a Coalition Conservative Member of Parliament for Mitcham. He resigned from the House of Commons on 13 February 1923 by appointment as Steward of the Chiltern Hundreds. The following year he was created a baronet, of The Hall Place. 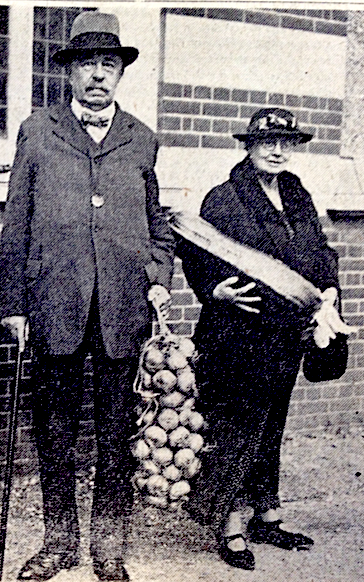 Although his local interests were mainly confined to Mitcham, Sir Cato was well known in Tooting as chairman of the Tooting Labour Exchange and Court of Referees, and lately had been active in negotiating for a new Labour Exchange to serve both Mitcham and Tooting.

He was also keenly interested in the boy scout movement, and was president of the Boy Scouts’ Association of Mitcham.

He succeeded Sir Henry Chaplin (afterwards Lord Chaplin) as M.P representing Mitcham after its secession from Wimbledon, and represented the division from 1918 to 1923.

By profession he was a solicitor. having been in private practice since 1883. He was a Doctor of Laws of Dublin University. a Fellow of the Royal Historical Society. and a Fellow of the Royal Society of Literature. He was created a Baronet in 1924 for public services rendered, and as there is no issue of his marriage the baronetcy dies with him. Until recently Sir Cato was an active president of the Mitcham Conservative Association. He was a Justice of the Peace for Surrey and a familiar figure on the bench both at Croydon and Mitcham.

Widely travelled, Sir Cato had a fine collection of curios and antiques, and he was the proud possessor of a miniature aviary and menagerie at Hall Place.

The funeral service, which took place at Mitcham Parish Church on Wednesday, was attended by representatives of the many activities in which Sir Cato was interested, and there were over 100 wreaths. The remains were afterwards cremated at West Norwood Crematorium, and later in the day a committal service took place, while the urn was buried in the family grave in the old Mitcham Parish Church cemetery.

A few days since a well-known inhabitant, Mr Worsfold, of Hall-place, Church-road, Mitcham, met with an accident which might have had a fatal termination. Some alterations being in progress at his residence, he mounted a ladder to the roof to see how things were looking, and missing his footing, we suppose, fell to the ground, with which his head came in contact. He was promptly picked up and carried to the into the house, where he was attended by Dr Marshall, who at first thought that the injuries received were of a very serious nature. With careful treatment, however, he gradually recovered from the effects of his fall, and is now making rapid strides towards complete recovery. Our readers will hear this latter with satisfaction

Surrey Mirror – Friday 21 March 1924
Letters patent have passed the great Seal of the United Kingdom granting the dignity of a baronet Mr. Thomas Cato Worsfold, of The Hall Place, Mitcham.

Marcus Brutus Hubble, a Mitcham publican, his sons Marcus Caius Cornelius Horatio and Brutus Cesar Theodore Hubble, and his grandson Marcus Aurelius Hippolytus Theodore Hubble, are not the only residents of Church Road who lend to that thoroughfare classical distinction At the beginning of it dwells Dr Cato Worsfold, the member of Parliament for Mitcham; Julius Caesar Smith, hawker, lives at the end, and near the middle are to be found Agrippa Money and little Xenophon Wilks. Mr Hubble, the elder, three brothers and sisters: Martius Caius Coriolanus, Horatio David Pericles. Arthur Plato Cornelius, Orphelia Carolina DesdemonaCecilia Laura Augustina, and Juliet Octavia. “A learned great-great uncle began the noise,” said Mr Brutus Hubble to a Daily News representative, “but none know much about the gents, after whom are named. Grandfather, I understand, got tired hearing Tom, Dick, Bill and Jack, so at a great-great-uncle’s suggestion he made a change. For myself I like the names”.

A pony and several valuable Pyrenean dogs were rescued in a fire that broke out early to-day, and destroyed part of the stables of the Hall Place, Mitcham, the home of Sir Cato Worsfold, the ex-M.P. “The pony was in the middle of a furnace,” a fireman said. “He must have been surrounded by fire for at least half an hour after the outbreak was discovered. One of the dogs rescued was Roland, whose kennel was directly beneath the stable. “He was released by gardener and promptly bolted,” said Sir Cato. “He was brought back by his own son, Benoit, who took him to his own kennel.” Sir Cato assisted in the rescue of friends.

Surrey Mirror – Saturday 03 June 1882
The will of Worsfold, late of Hall-place, Mitcham, Surrey, who died on the 25th March last, was proved on the 23rd May Eliza Worsfold, the widow, and William Worsfold and Thomas Cato Worsfold, the sons, the executors. The testator gives to his widow £1,000 and his furniture, and gives the residue of his estate to her for life, and afterwards to his sons and daughters. The personalty amounts to £9,799 3s. 6d.