In June 1972, this close was named after Miss B Thrupp, ex-Mitcham Council Housing Manager. 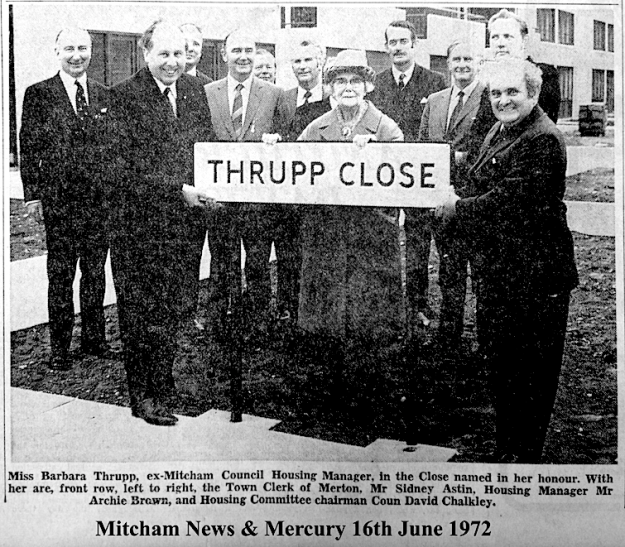 Bought for £14,475 from Messrs Clarkson by Mitcham Borough Council for rehousing people made homeless by the Explosion, and for their slum clearance programme.

1935 Map of land bought by the Council

This 1952 OS map shows that the estate had its own fire alarm post (FAP), next to number 2.

“Laying out of housing estate”

Reporting on the lay-out plan of New Close Housing Estate, the Borough Engineer, Mr Riley Schofield, said it allowed the erection of 135 houses. The density on the land purchased, viz. 9.70 acres plus one half of the width of Phipp’s Bridge road, and one half of the railway, a total of 11.149 acres worked out at 12.1 houses per acre.

A portion of the estate accommodating 36 houses might not be proceeded with, leaving 99 houses for immediate development.

It was proposed to erect a disinfection house, to be isolated in the south-east corner of the property.

The Council approved the plan.

-Messrs. Chart, Son and Reading reported that they had been in communication, on behalf of the Council, with Messrs. Clarkson for the acquisition of 9 1/2 acres in Phipps Bridge Road, and that the terms upon which Messrs. Clarkson were prepared to sell were, that the total sum to be paid for the land should be £14,475, and that of this sum £12,047 should be paid upon possession being given of 8 acres 0 roods, 5 perches, and that the balance of the purchase money should be paid on vacant possession being given of the remainder of the land either on the death of Mrs. Clarkson or earlier if Mrs. Clarkson ceases to occupy New Close House. The Town Clerk reported that these conditions had been referred to the District Valuer for his observations, and a report had been received from the District Valuer stating that he was prepared to support an application for a loan at this figure.

Resolved. That the Council be recommended to purchase the site at the price quoted, and that application be made to the Minister of Health to sanction a loan of £14,600 for this purpose.

8. Nameing of New Street
– That in lieu of “New Close” suggested in the report of the Housing Committee, the name of “Jarrow Road” be substituted.

New Close Estate.
-It was Resolved, That his worship the Mayor be asked to hand over officially the New Close Housing Estate to the Housing Committee on Saturday, October 23.

– The Borough Engineer reported that he had received a quotation from the Wandsworth Gas. Co. for the carcassing required for 95 houses and 3 flats for gas services, amounting to £176 12s., and that he had also received an offer from the company to supply 98 slightly used reconditioned gas cookers at the reduced price of £5 each.

Resolved, That the quotation and offer submitted by the Wandsworth Gas Co. be accepted and the order placed accordingly.

From the minutes of Housing Committee
11th December 1947
page 151

The tenant of 36, New Close, has erected a 15-ft. long pigeon loft without first having first obtained the Council’s permission. I shall be glad of the Committee’s instructions.

I am, Ladies and Gentlemen,
Your obedient servant,
B. THRUPP
Housing Manager

Resolved – That the tenant be instructed to remove forthwith the pigeon loft which has been erected without permission.

The name ‘New Close’ can be traced back to the 17th century. Deeds published in the Harvard Law Library mention a lease from that Richard Garth for ‘New Close’.

Source: Harvard Law Library, though this text is no longer online
Retrieved: 2007
This text can also be seen online as part of a Google Books search.