In the 1911 Census, he was living with his parents Harry, aged 23, a clerk in the Army and Navy Stores in Westminster, London, and Alice, also 23, a sewer in a silk printing works, presumably the nearby Merton Abbey works. They lived in Littler’s Cottages, at the corner of Phipps Bridge Road (the part now called Liberty Avenue) and Church Road.

In the 1925 street directory, Harry Warner was living at 10 Shore Street, off of Phipps Bridge Road.

On 30th June 1934, when he was living at 10 Shore Street with his parents, he married Lilian Violet Ward of 75 Church Road, at the Mitcham parish church in Church Road. They were both 23 years old.

In the 1939 Register he was living at 75 Church Road, Mitcham, with his wife Lilian Violet. He was listed as a central heating fitter’s labourer.

He was originally in the Royal Artillery and was then transferred to the Somerset Light Infantry, 7th Battalion, service number 1741114.

Died 1st October 1944, when his battalion was part of the 214th Infantry Brigade in Operation Market Garden. He was killed by a mortar.

No longer exists. It was a cul-de-sac off the south side of Phipps Bridge Road (the part of which is now Liberty Avenue), and west of Willow View.

A GROUP of Colliers Wood residents have lost their fight to prevent their homes being
demolished in a housing redevelopment scheme.

The Ministry of Housing this week approval Merton Council’s controversial compulsory purchase order for 34 properties in the Shore Street area.

But some of the residents have gained a partial victory, for while their homes will still be demolished, they are not now considered unfit for human habitation.

Nine properties have been transferred from this category and their owners will get compensation at the higher market value instead of site value.\

And another 12 owners are to receive good maintenance payments for keeping properties, confirmed as unfit, in good condition.

At a public inquiry in October, the council claimed all but one of the houses were unfit and sought approval to remodel the whole area.

Residents claimed many of the properties were quite habitable and others could easily be improved. Demolition, they said, would not be the answer.

But the Minister has accepted his inspector’s recommendations that the demolition of all the buildings is the best solution, and has confirmed the order.

Town Clerk, Mr Sydney Astin, said this week : “In accordance with the Minister’s instructions, market value and good maintenance payments will be made, where applicable.”

The houses were described by the Medical Officer in an inspection in January, 1939:

To the Chairman and members of the Public Health Committee,
Ladies and Gentlemen,

As requested by the Committee I have made a detailed inspection of the houses on Shore Street.

There are fourteen houses, eight (1-8) situated on one side of the road and six (9-14) on the opposite side. The houses are between sixty and seventy years old. All the houses are of fairly sound construction and the outside walls have been built with a hard brick. The roofs are made of slate and are fairly sound.

The front room of each house opens directly on to the pavement. There is no bad arrangement of the street, and each house has plenty of air space both front and back.

As far as the inernal arrangement is concerned there is on the ground floor a front living room, with a scullery behind, and on the first floor, a front and back bedroom. The height of the rooms varies from 7 ft. 9 ins. to 7 ft. 11 ins. In some cases the floor of the front room ground floor is of concrete, in others it is wood. The staircase in all the houses is extremely dark.

Although the houses are old they are not unfit for human habitation, and the defects which found can be remedied at a reasonable cost.

As far as I have been able to ascertain there has been only one recent occasion in which the street was flooded, and this was due to the gulleys being blocked by rubbish. In heavy storms the rain beats in under the doors of some of the houses and causes the floors to become very damp. This state of affairs could probably be remedied by raising the height of the door steps and attention to the fit of the doors. Some of the houses have back additions which make the scullery very dark, and cause a certain amount of dampness.

Two of the houses are overcrowded, and two showed the presence of vermin infestation.

The owner has always complied with any sanitary notices that have been served.

A. T. Till
Medical Officer of Health

SCHEDULE OF DEFECTS
By house number

1. Three adults, seven children. Small fractures in brick work of back wall. Slight dampness round chimney breast in back bedroom.

Occupants in the 1933 Electoral Register 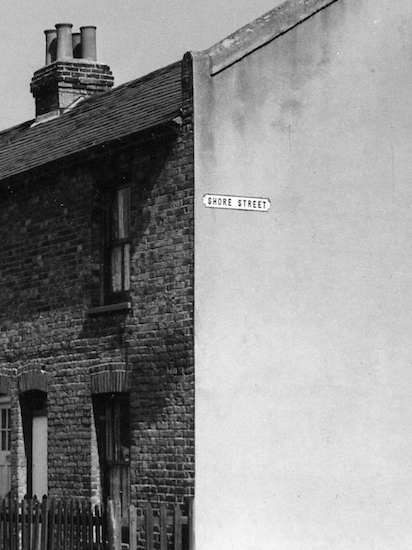