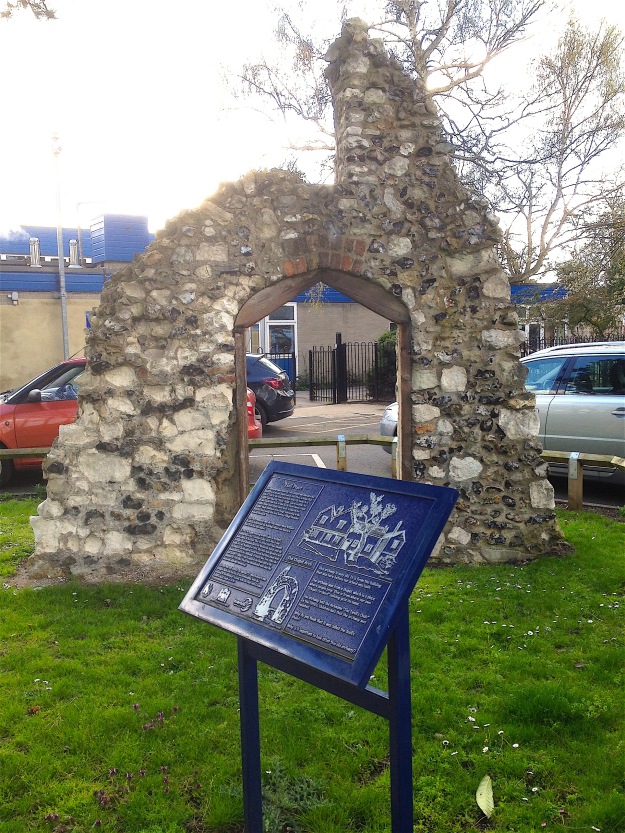 Inscription on panel about Hall Place:

This archway dates from the 14th century and was once the entrance to a private chapel inside Hall Place, a house first built in 1348 by the wine merchant Henry de Strete. It is thought that when the “Black Death” was at its peak, the private chapel was built so that the de Strete family could worship away from people most likely to pass on the disease. Many members of the clergy ministering to the poor also died during this time, leaving village churches without ministers.

Hall Place remained until the 19th century when William Worsfold, demolished the building, which was then in a state of decline and neglect.

In 1867 he began building a new house in its place, constructed in the Victorian Gothic Style which was fashionable at the time. This Victorian Hall Place passed through three generations of the Worsfolds family until the death of Cato Worsfold in 1936. His wife then agreed to sell the estate to developers to build houses but these plans were abandoned due to the outbreak of World War Two. After the war Surrey County Council acquired the estate and in the summer of 1949 Hall Place was demolished with only the Medieval archway remaining.

The site was left derelict for another 22 years before it was brought back into the life of the community, with the building of Ravensbury School, now our very own Cricket Green School, built in 1970.

Hall Place was demolished in 1949.