Demolition of paint factory in Western Road. Photo is looking south, part of the gas works can be seen in the background on the left.

The Committee beg to report the receipt of a letter from Mr. Hadfield, thanking the Brigade for their services at the fire on March 9th.

The Chairman of the Fire Committee,
Mitcham Parish Council.

We write at the earliest possible moment to put on record our thanks to your Fire Brigade for the prompt manner in which they responded to our call, the fine way in which they worked and the splendid stop which they helped to effect. It was a great achievement to have confined damage to such small proportions, and we congratulate the Parish Council or having such a very efficient service.

Hadfields (Merton) Ltd, were formed in 1917 to act as manufacturers of or wholesale or retail dealers in varnish, japans, enamels, colours, oils, paints, pigments, cements, dye wares and other such, and particularly to acquire the businesses of varnish, paint and enamel manufacturers carried on under the name of George Hadfield, Phipps Bridge, Merton and George Hadfield (successor to C H Blume), Western Road, Mitcham. These businesses were conveyed to the company by George Hugh Hadfield and Samuel Rogers Hadfield, both of whom were directors. The Merton company claimed to have been trading since 1840 (letterhead seen at the depositor’s office), and it appears that George Hadfield, father of George Hugh and Samuel Rogers, had purchased Paul Addington’s varnish works at Phipps Bridge in 1892. Addington was certainly already working there in 1851.

In 1969 the UK paint manufacturing business and trade name ‘Hadfield’, with the fox trademark, were sold to Bestobell Paints and Chemicals Ltd, and the parent company’s name changed to G H Successors (Merton) Ltd. (A new company, called Hadfields (Merton) Ltd, was formed for the purposes of the transfer, to acquire the parent company’s UK interests.) The parent company was purchased in 1972 by the Land and House Property Corporation, which was itself acquired by the depositor in 1978.

Job ads that appeared in local papers in 1972/3 showed the company name as Carson / Hadfields, as it was Bestobell’s paint subsidiary, Carson-Paripam, that had merged with Hadfields. 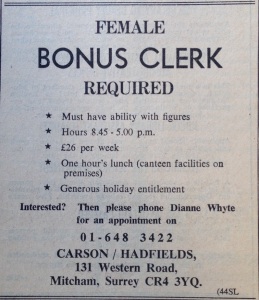 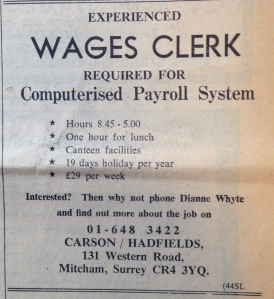 These works are devoted essentially to the production of highclass paints for decorative and for specialized industrial use, including transport finishes.
Manufacture in the main paint shop is based on the following sequence: (1) edge-runner, (2) roller mill, of which a variety of types is employed, (3) mixer, and (4) refining mill. The shop is designed to facilitate a steady flow of medium-size batches in a wide variety of colours.
Ball mill production of both large and small batches is well illustrated in a second paint shop; and other departments produce water paints of various types, especially emulsion paints, cellulose lacquers, and the most modern synthetic enamels.
The laboratories, recently rebuilt after bomb damage in 1944, show very clearly the impact of science on the paint industry, and the lengths to which it is necessary to go to ensure suitability of the products for specific purposes. In addition to this factory, the laboratories are responsible for development and testing oi paint media and varnishes, including insulating varnishes, produced at the Merton factory.
A very clear system of identification, necessitated by the wide range of materials employed, is an important feature of the factory organization.

Minutes of meetings held by the Mitcham Parish Council are available on request from the Merton Heritage and Local Studies Centre at Morden Library.