HEROISM REWARDED.
Sir Arthur Spurgeon yesterday, as chairman of Croydon County Bench, handed certificates of the Carnegie Heroes Fund and £10 each to Shoeing-smith Thomas Gleed, of Peckham; John Lemon, of Merton; and P.c. Davies, of Mitcham. Lemon and Davies took their award in the form of War Bonds.

In October last, at Mitcham, a man named Alfred Simmons was overcome by gas when cleaning sewers. Lemon, his mate, went down to his rescue, and was also overcome. Gleed then descended, but was forced back by the fumes. Ignoring a doctor’s warning, he went down again, and was brought up unconscious. Lemon, in the meanwhile, had regained consciousness, and was saved by grasping a lowered rope. P.c. Davies then went down, but was hauled up in an unconscious condition. He, however, made a second attempt, and succeeded in getting a rope round Simmons’ body. Simmons was brought up unconscious but survived. 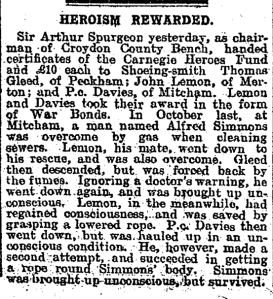