Road on western edge of the Mitcham Gas Works, and north of Fox’s Path.

On the 1910 OS map, there were two more houses on the east side, at the corner with Portland Road, numbers 17 and 18. These may have sustained bomb damage during World War 2, and were demolished. In 1995, planning permission was approved to build two new houses, numbered 17 and 18.

The road was built around 1902, as shown in the council minutes:

2. Deposited Plans. – The Buildings Sub-Committee reported that they had carefully examined al the plans of new streets and buildings deposited since the last meeting, and on their recommendation, it was Resolved:-
(a) That the undermentioned be approved:
No. 2165, Jordan, T, 18 houses, Seaton Road, Mitcham 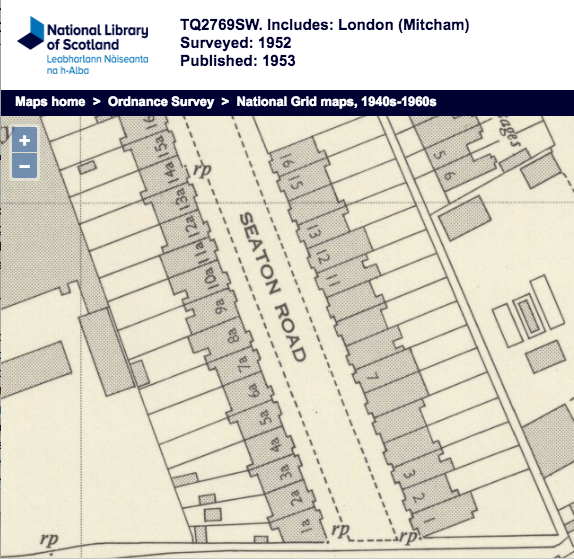 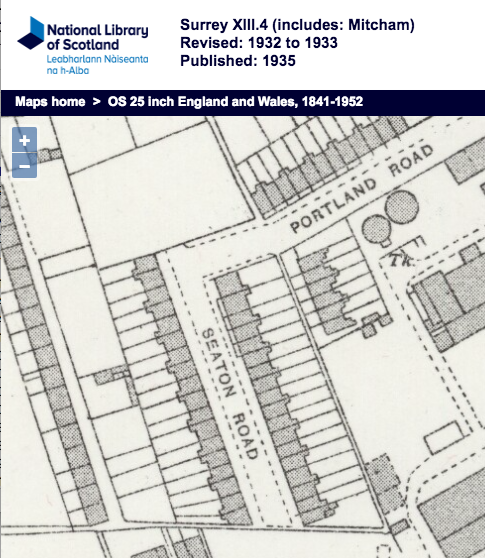 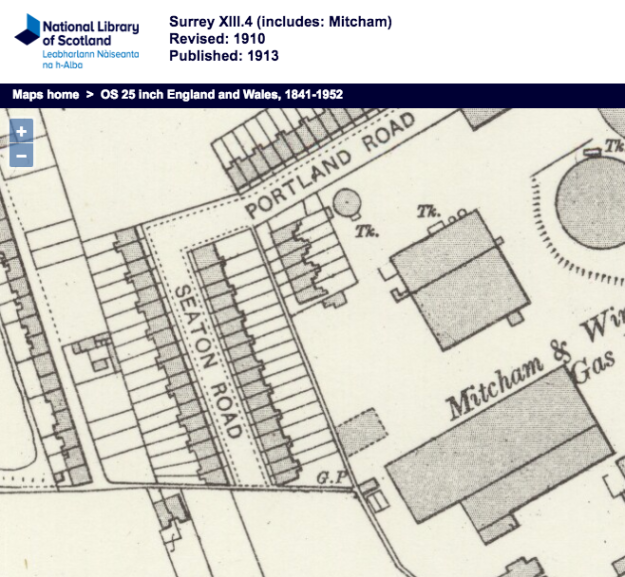 1937 aerial view looking to east. At top of photo is the Mitcham Gas Works. On the right, the footpath is Fox’s Path. On the bottom of the photo can be seen part of the factory roof of Standard Upholstery.

North Side
1A, John TIBBLES
2A, Henry JAMES
3A, Alfred HUDSON
4A, Leonard DIXIE
5A, Bernard JEWELL
7A, George HATFIELD
8A, Samuel CHAMBERS
9A, Mrs Louisa CRESSWELL
10A, Reginald F. WILLIAMS
11A, Arthur RUSSELL
12A, George CAIN
13A, George Albert BENNETT
14A, Abraham BATES
15A, John COYLE
16A, David LUXSON
17A, Thomas POWELL
18A, Arthur DREW

A total of 30 men from this road joined up in World War 1, with 6 not returning.

Of the six that died, it’s possible that Frederick Matthews lied about his age. On the Surrey Recruitment Register his age is shown as 19 when volunteering on 30th October, 1915, but the Commonwealth War Graves Commission has his age as 20 when he died in March 1918. His elder brother had volunteered on the 3rd June 1915.

The names of the six fallen are on the Mitcham War Memorial.

T DEACON of 6a Seaton Road, aged 19 Years, Hawker. Volunteered on 1 November 1915 to the Royal Fusiliers.

C SMITH of 3a Seaton Road, aged 20 Years 2 Months, Carman. Volunteered with the Derby Scheme on 1 March 1916 to the Royal Field Artillery.

From the Mitcham Urban District Council minutes,
Volume 3, page 120, Finance and General Purposes Committee meeting of 11th September, 1917, Mr Rabbetts reported contraventions under the Shop Act of Mrs H. Evens of 14A, Seaton Road, for serving a customer after closing time. Also Mr Carmino Tortolano of 18, Seaton Road, who at 7.15pm served a customer with pickles.

The 1911 Shops Act dictated the half-day closing of Wednesdays, in order to give staff time off.

Minutes of meetings held by the Croydon Rural District Council, and Mitcham Urban District Council are available on request from the Merton Heritage and Local Studies Centre at Morden Library.