From the Mitcham and Colliers Wood Gazette, 28th March, 1973 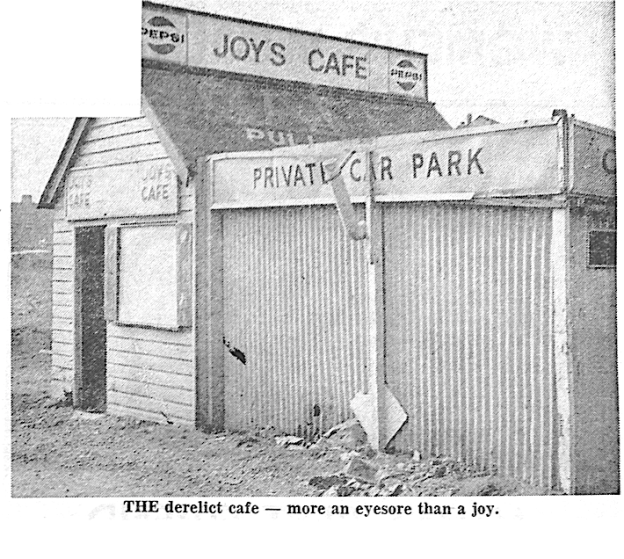 “THE derelict cafe – more an eyesore than a joy”

JOY’S “PLACE” was once a popular transport cafe. But now it’s got a new use — as one of the dirtiest unofficial public conveniences in Mitcham, claim angry local residents.

The cafe is on a site at the corner of Christchurch-road and Phipps Bridge-road. It closed 18 months ago, but so far there’s no sign of the building being demolished and the site cleared.

“They should put a match to the place. It’s disgusting. It’s a loo for all and sundry and a rubbish dump. The place has become an eyesore and the sooner it goes the better. Everyone round here has become fed up with it” said Mrs Doreen Sparrowhawk, who runs a greengrocers shop opposite the site.

“By now it must be full of disease and germs — but because there is no door on the place children go and play in it” she added.

Mr Michael Tuhill, who runs a newsagents in Christchurch-road, said: “It’s an unofficial public convenience. People pull up in cars and use it and it’s getting a bad name. The council don’t seem to be interested in doing anything about it but its a health hazard as children play in and out of it as well. Heaven knows what they could pick up by playing in it.”

Mrs Shelly Condron, who runs a hairdressers opposite the cafe, said that lorry drivers who used to eat at the cafe when it was open now use it as a lavatory.

“We’ve spoken to them about it but you just get a lot of lip back. Its a filthy place and everyone round here would like to see something done about it.” she said.

The door of the cafe was torn off soon after it was closed. Now, it is full of rubbish with chairs and tables left inside broken.

“No-one knows what happened to the people who ran it. I think the proprietress died and one day it shut up and has been closed and like that ever since” said Mrs Sparrowhawk.

A spokesman for Merton’s surveyors department said that they were aware that there were problems arising from the derelict cafe. But there are redevelopment problems on this site and consequently there has had to be a delay on a development decision. But as soon as we are able to do so the site will be cleared” he said.