Road named possibly after Robinson Crusoe story. Crusoe Farm Dairy was named by its owner on the possible residence of nearby Tooting Hall by Daniel Defoe, author of Robinson Crusoe.

The 1862 map by Stanfords shows a road called Robinson’s Lane running from Merton Road west to Pig’s Marsh. In 1868 the railway line between Tooting station and Wimbledon (the next station was Merton Abbey) had been built, cutting through this lane. It is possible then that the road west of the railway line became known as Robinson Road, the east of it retained Robinson Lane, as far as Swain’s Farm, from there to the London Road being called Swain’s Lane.
Later, Robinson Lane became part of Swains Lane, which itself was renamed Swains Road. 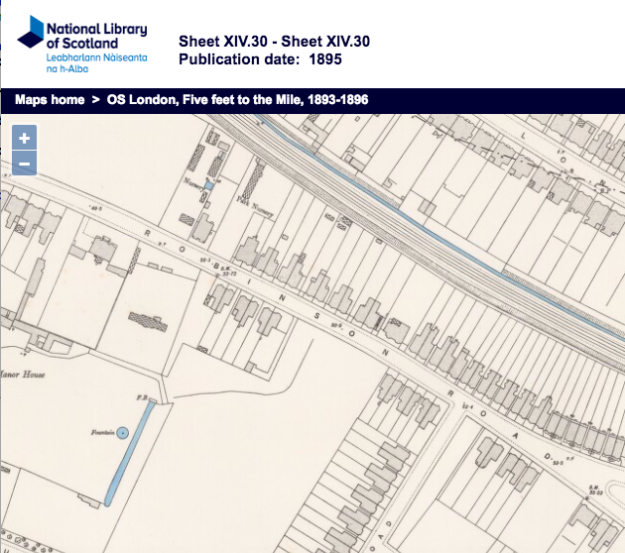 Occupants from the 1891 street directory:

Another adjourned case, Mr. F. P. Lock, was heard. He was in grade 1 and the Tribunal had referred him to re-medical examination. He appealed on medical grounds. He now stated his appeal for re-examination was refused.

Ald. Chart: So you are still in grade 1? -Yes.
Applicant said his age was 36, and be resided at West-gardens, Robinson-road, Merton. He was a carpenter and ship’s joiner by trade. He was totally rejected first of all, he said.
Chairman: In the circumstances, he is a grade 1 man. We have no alternative.
Applicant: It seems to me, sir, when I went to the County Hall that those who can afford to get a certificate from a Harley-street specialist or get a solicitor can get a hearing.
Chairman: That does not really affect us.

The appeal was disallowed.