Cumberland Hospital was paid for by Isaac Wilson, and built on land he owned, at the rear of his house The Birches. Its entrance was at the end of Whitford Gardens at Cold Blows.

Opened in 1939, it was demolished in 1992. Its perimeter wall along Cold Blows remains. 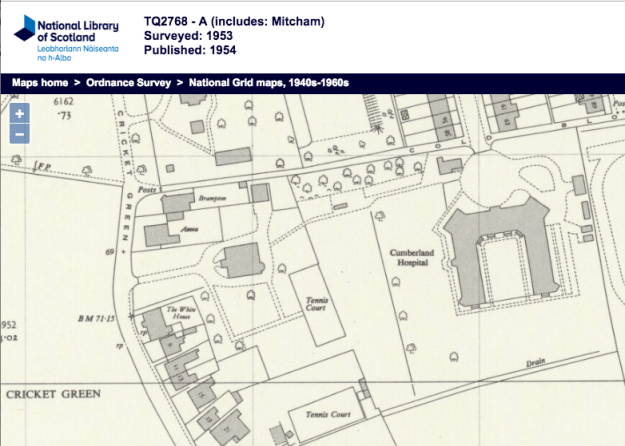 LEFT THE GOLD KEY AT HOME

An amusing hitch occurred at the formal opening of Cumberland House, Mitcham, on Friday afternoon. Sir Isaac Wilson, as the munificent donor of the place, was about to present the key to Sir Richard Meller, M.P., with which to unlock the door, when he discovered that he had left it at home.

A messenger was dispatched post-haste, and in ten minutes’ time he arrived with the gold key.

The building was erected at the cost approximately of £60,000 by Sir Isaac Wilson, on land belonging to him, and adjoining his own residence at The Birches, almost overlooking the famous Mitcham Cricket Green. The foundation stone was laid on March 1, 1937, by Sir Kingsley Wood, then Minister of Health. The place was originally to be used as a home for poor disabled persons, and it was vested in trustees for that purpose. Subsequently, however Sir Isaac and Lady Wilson, with the approval of their co-trustees, offered the building as a gift to the Surrey County Council for use as a convalescent home in connection with the Council’s hospitals. The munificent and public-spirited offer was gratefully accepted in May, 1938. Under the scheme, Sir Isaac and Lady Wilson are life members of the committee of management, with seven other members appointed by the County authority. The hospital has been furnished and equipped by the Council, who have also appointed the necessary staff. The first patient was admitted on March 29 last. The hospital has accommodation for 110 patients and 24 staff. The patients are mainly transferred from hospitals as requiring from two to eight weeks’ further treatment in order to firmly reestablish their health.

On the ground floor there are the administrative offices, kitchens, a dispensary, and two units. The first floor comprises two ward units, an electrical treatment room, the doctor’s flat, and dining-rooms for the nursing and domestic staff. The second floor contains bed- and other rooms for the matron, assistant matron, and 22 members of the nursing and domestic staffs, including two staff common rooms. The lay-out of the Home is magnificent, with sunshine balconies, and spacious grounds for recreation.

Sir Isaac paid tribute to the architects, Messrs. Chart, Son and Reading; the builder, Mr. C. Higginson; his confidential friends, Mr. R. M. Chart, and his son, Mr. Stephen Chart (Town Clerk of Mitcham), Sir Richard Meller, and the Rev. C. A. Finch, chaplain of the home. He declared that every one of these gentlemen had helped him by good advice during the building of the Home. He went on to say that the Surrey County Councii were now trying to do the very best they could with the building, and “I shall be fully recompensed to know that the institution will be carried an efficiently in the future for the benefit and use of convalescent cases,” he added.

DEPUTISING FOR MINISTER OF HEALTH.

Sir Richard Meller humorously suggested that a record of the ceremony should be “the safe arrival of the key.” He greatly appreciated the honour and privilege conferred upon him, he said. He was really deputising for the Minister of Health, who was unable to attend. “This is a succession of noble acts of benefaction by Sir Isaac Wilson,” commented Sir Richard. The building of Wilson Hospital, and the Garden Village, are other worthy examples of his generosity. There is nothing which adds to human happiness so much as the enjoyment of good health, and Sir Isaac and Lady Wislon have been so charity-minded as to build these institutions to try to confer the greatest blessing on mankind by providing them with means of achieveing the greatest human happiness.”

In handing over the Home to County authority, Sir Richard thought the donors had paid tribute to the efficient administration of that body. It came at an opportune moment for the County Council in providing them with the necessary accommodation to relieve their present hospitals, and particularly as an outlet for the large institution being built on St Helier Estate. Sir Richard gave the assurance that the intentions of the trustees would be carried out as far as possible.

“The opening of this home, concluded Sir Richard, “confers a very valuable asset upon the County, and it should be duly recorded among the great historic events of Mitcham.”

“By taking over this building, the County Authority have enabled Sir Isaac to confirm two benefits on community, provision of an institution for the sick, relief for the ratepayers. It is a second example of the dual benefit that Sir Isaac has conferred upon the ratepaying community through Wilson hospital and now Cumberland Home. “Where I am ye shall dwell,” seems to have animated the donor, for he has built both institutions close to his own private residence, equivalent to saying what is good enough for me I hope is good enough for you. In your name as residents of Mitcham, and on behalf of the County of Surrey, I express to Sir Isaac and Lady Wilson our whole-hearted gratitude for their generosity and kindness. Before their eyes they will have the satisfaction and knowledge that those who came here sick went away rejoicing in good health.” (Cheers).

The company then proceeded to the main entrance of the budiling, and Sir Richard unlocked the door with a gold key, declaring the Home open for the succour of mankind.”

The hospital, originally under the Surrey County Council, became part of the NHS in 1947. This ad for nurses in 1949 shows it was part of the St Helier hospital group: 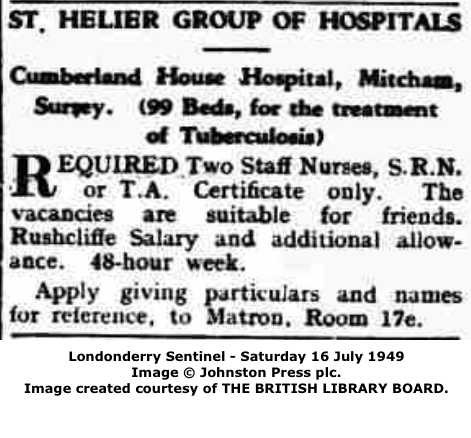 In 1979, the Sutton, Merton and Wandsworth Area Health Authority announced it was to close. The buildings were demolished in 1992. Redevelopment of the site by the health authority has included day care centres, and is the site of the Merton Dementia Hub.

For more information about the hospital, see the website Lost Hospitals of London.