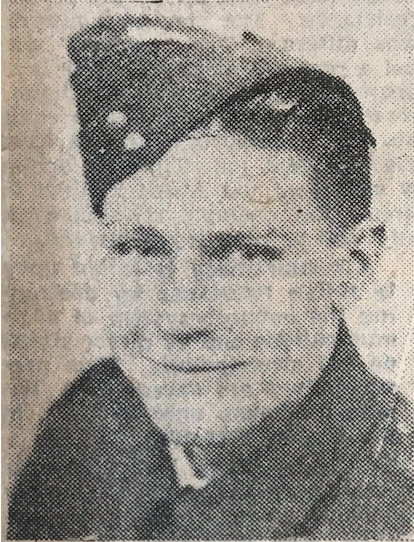 Kenneth Laurence PILE, was born in the last three months of 1922. His father was School Keeper at Western Road School and lived in the School House up to his death in 1939. Ken Pile’s mother then moved to Eldertree Place.

Ken Pile served with the Royal Air Force Volunteer Reserve (R.A.F.V.R.) and, as Flight Engineer, having flown 23 sorties with 166 Squadron, he was awarded the Distinguished Flying Medal on 15th September 1944.

He died on 11th March 1945 on a training flight with 156 Squadron, when his Lancaster III crashed about one mile from Molesworth airfield in Northamptonshire. All onboard were killed. His remains are buried at the London Road Cemetery, Mitcham.

Two Mitcham pilot officer brothers of the R.A.F. are in the news this week through the award to one of them of the Distinguished Flying Medal.

He is Pilot Officer Kenneth Laurence Pile, aged 22, eldest son of Mrs E.C. Pile, Eldertree-place, Grove-road, Mitcham, who has completed his full number of “ops”, most of them over Germany.

His brother Eric, who is two years his junior, trained in Southern Rhodesia, and is now in Italy.

Both were educated at Western-road Central School, where their father, the W.A. Pile was school keeper from the opening day until his death. Mr Pile served through the last war.

P.O. Ken Pile continued his education at Wimbledon Technical Institute. He was a Flight Engineer with the R.A.F.V.R., with a rank of Flight Sergeant, when his gallantry was officially recognised by the award. it is not yet known why he was decorated.

Both brothers are keen sportsmen.

The DFM award is described in the Britain, Campaign, Gallantry & Long Service Medals & Awards from FindMyPast.com

This N.C.O. as Flight Engineer has completed 23 sorties against the enemy including the most heavily defended targets in Germany and occupied territory. He has displayed skill of a high degree at his work and has been undeterred by any opposition the enemy has offered. He has proved himself to be a worthy member of a gallant crew and has, when flying with a different
crew, inspired them to the same spirit and devotion to duty and crew discipline as he possesses himself. To the experienced crews with whom he has flown, his mature knowledge has been of the greatest assistance. For his coolness under Fire and high sense of duty, he is recommended for
the award of the Distinguished Flying Medal.

From the Commonwealth War Grave Commission

Son of William Alfred and Ellen Charlotte Pile, of Mitcham.