It was locally listed in December 1992 by Merton Council, who note:

This is a two storey building which is thought to date from the early years of
the nineteenth century, possibly a few years later than the adjacent Ivy and
Elm Cottages next door. The architectural style of the building again suggests
a regency period (like the adjacent tow cottages). The materials used include
red brick with a slate roof. The building does not relate closely in its design
with others in the vicinity, though it has similarities with the adjacent Ivy and
Elm Cottages. The main features of interest include the margined glazing bar
pattern, (and pointing ?). The large front bay appears to be of later date. 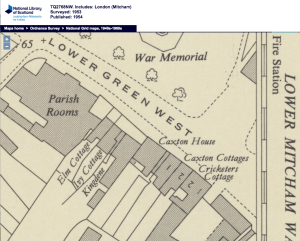 From the minutes of the
Public Health and Burials Committee
Tuesday, January 11th, 1921
page 462

5. “Kingdene.” – The Clerk reported that Mrs. Clarke, the owner of “Kingdene” had informed him that she was unable to find the money to carry out the repairs necessary at “Kingdene,” Lower Green, and in consequence she was anxious for the Council to carry out the work and to make an order declaring the expenses payable by instalments. Resolved, That the surveyor execute the necessary works, and upon completion the Council be recommended to make order as requested.