Erected to celebrate the diamond jubilee of Queen Victoria in 1897, the clock tower in the Fair Green has been moved twice. It was put in its current position on 26th August 2015. 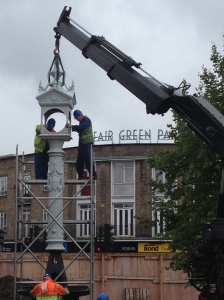 In May 2016, the lanterns returned to the clock, as reported on the Merton council website.

It is grade II listed by Historic England. Their summary is :

In Harlesden High Street there is a clock of the same design, and its description on Historic England has more details:

Erected by Public subscription 1887. Cast iron. Square base with inscription panel. Tapering decorative square feature above it decorated with dolphins, armorial bearings, supporting fluted circular column with spiral ornament, shields of arms and swags and square topped. Florentine capital. Above capital is a cube with a round clock face on each side crowned by pediments; central urn and spike. Lanterns removed.

Although it doesn’t say which jubilee the clock was made for, the year 1887 was the golden or 50th anniversary of Victoria’s reign.

Planning Applications to move the clock

Listed building consent for relocation of Grade II listed Victorian clock tower from current location to a site 55.5m to the south and located to the west of 17-19 Upper Green East including: provision of a replacement plinth; restoration of gas lamps in the form of 4 reproduction lamps; restoration of drinking water fountain; and associated hardlandscaping including new uplighting set into the paving pattern; information panels; wall and seating surround.

Listed building consent for the manufacture and fixing of replica original lanterns to refurbished and relocated clock tower.

Refurbishment and relocation of clock tower 25 metres north as a feature in a new pedestrianised and environmental improvement scheme. (Council application)