Charming but inexpensive homes are to be found in Mitcham and none are more attractive than those on Howard’s Brookfields Estate which is situated on the London Road. Buses pass the end of the estate’s own concrete roads, linking Acton and Belmont.
Only three minutes away from the estate is Mitcham (Southern Railway) Station, with its frequent services to Tooting, Croydon, Wimbledon, and thence to all parts of London, and not more than ten minutes walk is Mitcham Junction Station from which leave many fast trains to the London Termini.

Despite such accessibility, however, the estate retains something of that quiet peace which more and more home-makers are seeking beyond the whirl of London.

Fundamentally, however, these houses are constructed to the one well-considered design. With a drawing room (12 ft. 9 ins. by 11 ft. ins.) and a dining room (12 ft. 11/2 ins. by 10 ft. 3 ins.) a pleasant hall and a kitchen (10 ft. by 6 ft. 9 ins.), upstairs three bedrooms, two large and one small with bathroom and separate w.c. supply the accommodation which the average family finds most convenient.

Here, in fact, are homes that are in no way pretentious – but are lastingly comfortable, and well equipped. There is the fitted kitchen for instance. With walls and floor partly tiled, with notably complete cupboard and larder fittings, folding table, sink cabinet with two teak drainers, and the all-important enamelled “Ideal” boiler and enamelled gas copper.

Then there are the attractive tiled fireplaces in the drawing and dining rooms and the sensible electric panel fires in two of the bedrooms. There is the heated linen cupboard, and tiled bathroom with enclosed panelled bath, fitted with mixer and hot shower. Numerous gas, electric and radio points assure the maximum of convenience throughout.

Nor has that thoughtful planning stopped short at the house itself; not only are there good paths already made, but at the back is a brick-built coal bunker. Space for a garage is included in the garden. What is more, these homes have the very great advantage of being guaranteed brick construction throughout. With no road charges, legal charges or other extras, this estate of 200 homes is meeting the requirements of a great number of careful purchasers.

The estate was built on the site of the Brookfields Nursery. An ad in the 1929 town guide has

comprising 9 acres on the Banks of the River Wandle

Wreaths and Bouquets made to order
Telephone No. 2244 Mitcham

John Norkett CHESHIRE is listed as Market Gardener at the same address in the 1930 and 1938 commercial directories. 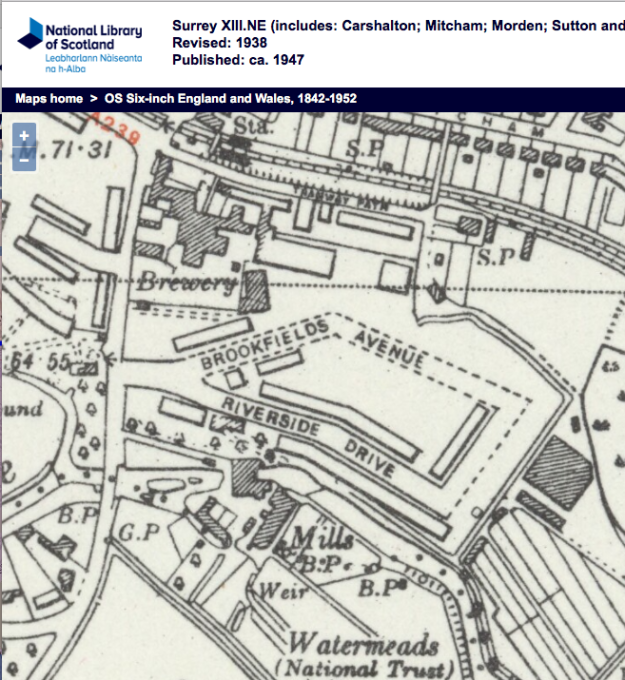 Private school that was at 17 Mitcham Park until 1973.

From the Official Guide to Mitcham in 1938:

Clarendon Preparatory School with Kindergarten is situated in the particularly healthy suburb at 17 Mitcham Park, Mitcham, within easy reach of railway stations and buses.

The house is large, bright and airy and has a nice garden. The School
provides a modern, thorough education for girls and boys from 4 to 16 years, with preparation for Higher Examinations. The health capabilities of every pupil are carefully studied. The School Staff are child lovers and keen pyschologists.

One of the features of the School has been the Dramatic, Art and Elocution Tuition open to girls and boys from 4 to 16 years at a very moderate fee. The pupils of the School derive great pleasure from these courses and public concerts are given during the year.

There is also a very successful Dancing Class, Ballroom and Musical Comedy being given.

ad from the 1938 Official Guide to Mitcham

The school closed at the end of 1973 due to the ill health of the headmistress, as told in this article from the 21st December 1973 issue of the Mitcham News & Mercury:

Goodbye Mrs Chips –
head retires and her
school closes too

It’s goodbye Mrs Chips and the end of an educational era with going home time for good at Clarendon, Mitcham’s only private school.

Mrs Nellie Barker, who has reigned for 37 years as headmistress, closed the school last week. She is retiring and selling the building in Mitcham Park.

“I honestly think it would be very difficult to sell it as a school. I am very sad about it but times have changed. I have been ill and my husband has wanted me to give it up for a long time. But I couldn’t, it had become part of my life, but now I really mist,: she said.

Mrs Barker took over Clarendon in 1936 after first helping out and then being asked to become its headmistress. But it was a private school for the education of the children of Mitcham’s business and professional families long before then.

And now, as the surrounding villas in Mitcham Park have become slightly less exclusive and slightly more converted into flats, Clarendon too has fallen to the onslaught of progress.

The school’s 70 children have now gone to other private schools or local state schools.

“Many of our parents are very upset about this. There are still many parents who value our way of teaching where the emphasis is on learning and which is not afraid of discipline when necessary, she said.

“I don’t think any of my children could have held my belief in discipline against me because when they have left and grown up they often come and see me. And many have sent their own children along.

“At times I have had school inspectors here who have told me that there should be allowed more time for play. But I believe in learning – the children were allowed time for play but if modern day educationalists had their way they would be playing all day!”

Mrs Barker is to go and live in Cheam and is to spend more time on her hobby – writing children’s plays.