A 1915 outbreak of swine fever gives clues as to where the piggeries were. See London Gazette which mentions the same piggeries as this notice by Surrey County Council: 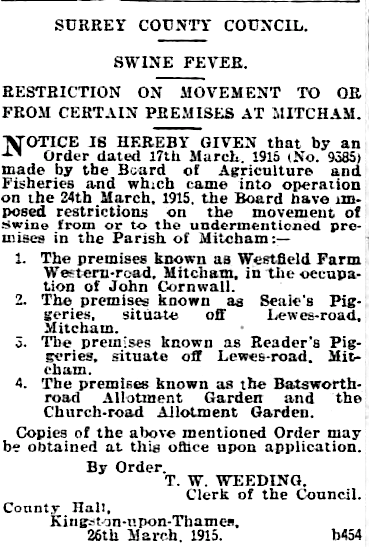 Westfield Farm can be found in the 1915 Kelly directory as being just north of Fountain Place on the west side of Western Road. 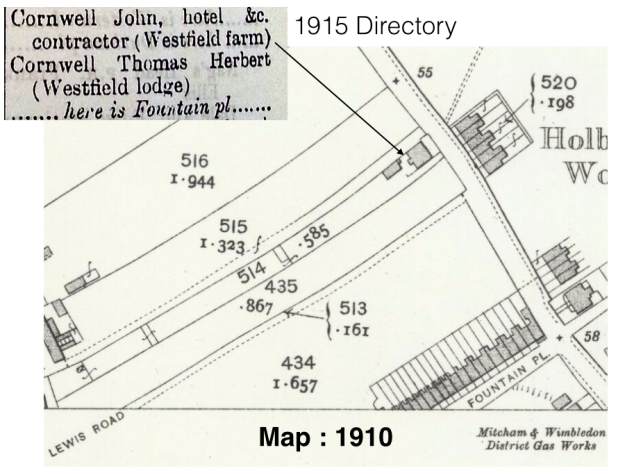 The location of the Lewis Road piggeries can be obtained from the 1915 Kelly’s Directory, as it describes the properties as from Church Road and after Oakwood and Ashtree Avenues. The 1910 OS Map can be used with an overlay to see theses avenues today and as there are only two properties on Lewis Road in 1910, the piggeries can be identified.

This photo of pigs in the 1950s was taken in Batsworth Road and the tanks in the background are on the W.J. Bush factory. RESTRICTION ON MOVEMENT TO OR FROM CERTAIN PREMISES MITCHAM.

Local people would say that you should never buy pork with the rind cut off, as that’s where the ‘diamond’ blotches of swine fever would show. Without the rind, you couldn’t tell if the meat was infected. Source: my father, who also kept pigs at the Batsworth Road site in the 1950s.