Road that continues eastward from Locks Lane to the level crossing at Mitcham Eastfields station. All properties currently have the postcode CR4 2LS.

On this 1953 OS map, houses, that are only on the north side of the road, are numbered eastward as odd from 13 to 91. As described from west to east:

This earlier OS map from 1894 shows that the road was part of Tamworth Lane, separated from the rest of it by the railway that was constructed in 1868. 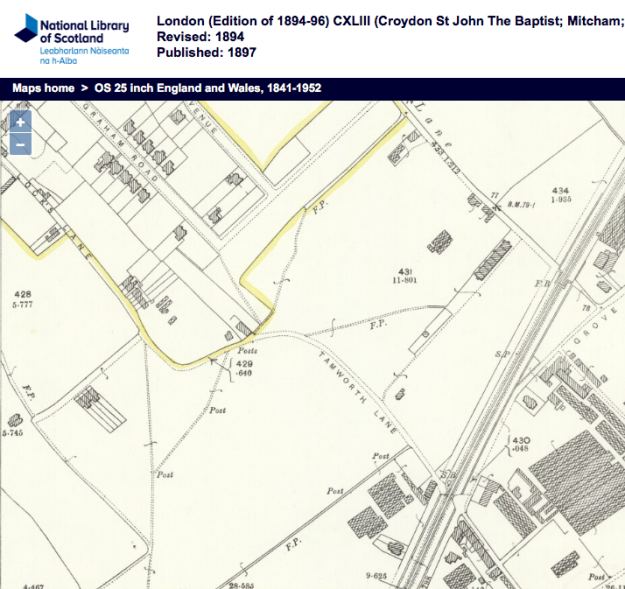 The 1914 electoral register lists the following occupants in Eastfields Road:

George TURNER is listed as Eastfields Road only

George Wheldon HEPWORTH had married Elizabeth Amelia WOODS, daughter of Henry WOODS, in 1911. The Henry Woods at no. 2 in the 1925 directory was his son, as Henry Woods senior died in 1922. 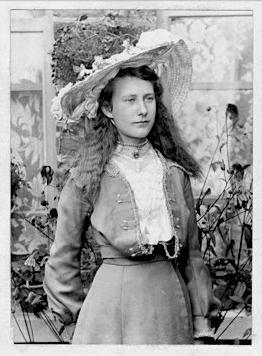 Elizabeth Hepworth nee Woods. Photo kindly provided by a descendant of the family.

Woods family gathering, believed to be in Rosemary Villas. Photo kindly provided by a descendant of the family.

The road was renumbered in 1929/30 as the 1929 electoral register shows these named houses, but the 1930 register and onwards show them as numbered. 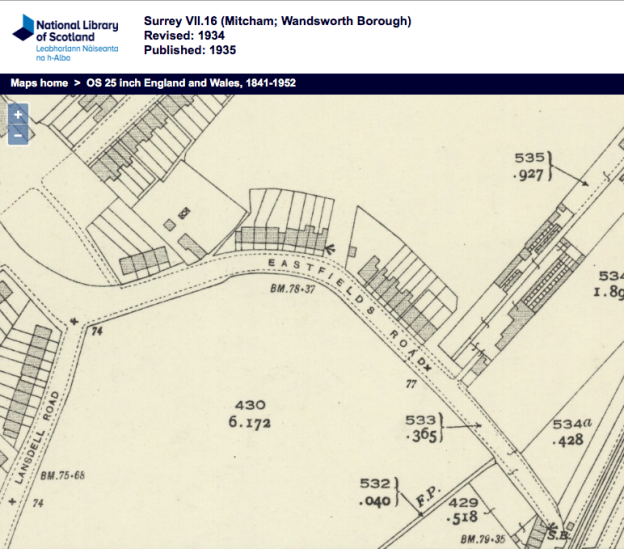 These houses, numbers 13, 15, 17 and 19, were owned by Renshaw, the marzipan factory in Locks Lane and initially rented out to staff. It was known as “Eastfields Corner”.

The shop at no. 21 used by John Jayson after WW2. He had originally a grocers shop at 2 Fernlea Road which had been bombed in the war. A fellow on the Facebook group Mitcham History said that there was a wood yard at the back where, as a child, he would take cardboard for it to be weighed and exchanged for a few pennies.

The shop became a newsagents/confectioners/tobacconist in 1957. It was Rogers Estate Agents, between 1959 and 1989, when it estate agency was sold to Dunley. Thanks to Tony Rogers for this information, see his comment below. Listed in the 1973 Mitcham Chamber of Commerce booklet with telephone number 648 8527, and shown in this 1959 ad:

In March 1954 planning permission was given for 40 lock-up garages to be built at the rear and side. 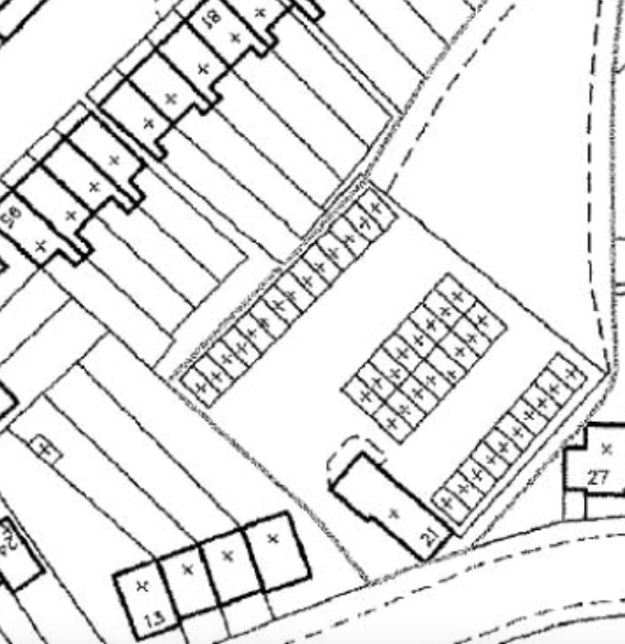 This property was in use as an estate agents up to 2002, after which it was empty and was bought by Merton Council with a Compulsory Purchase Order on 17th December 2009. It was redeveloped in 2014 as flats, as described in planning application 13/P1383:

Demolition of the existing two-bedroom property at 21 Eastfields Road and the adjacent 40 domestic garages and construction of a new three-storey building providing 21 flats [9 three bedroom flats and 12 one bedroom flats] with 14 off street car parking spaces with vehicular access on to Eastfields Road, landscaping and a freestanding building providing cycle and bin storage.

The flats are numbered sequentially from 1 to 21, with the address of 21 Eastfields Road.

The original number 39 had been damaged in WW2, and the rebuilt house reproduced the frontage in keeping with the rest of the terrace: 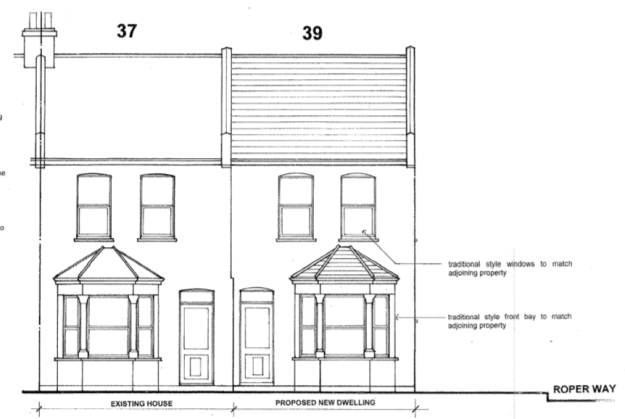 Front elevation of no. 37 and 39 from planning application

At number 71 was W. Steptowe & Sons, boot and shoe repairers.

A few minutes after Mr and Mrs Albert EXCELL and their five-year-old son, Johnny, of Eastfields Road, Mitcham, had left their bedroom at 2 a.m. the house was struck by lightning and plaster fell in large sheets from the ceiling on to the bed.

Newsagents T.G. COOPER, 96, Eastfield Road, stocked ‘Action’, a newspaper of the British Union of Fascists, according to this ad of 23rd July 1938: 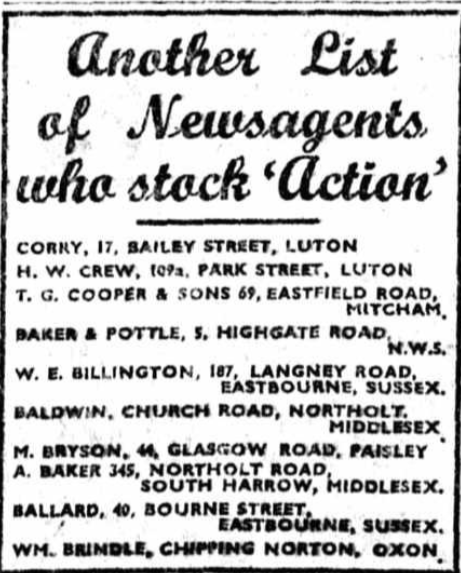 Laburnum Park was the name used for the housing development on the former Mitcham Stadium site. It may have been the name given by Wates Ltd, the developers, who bought the site in 1955.

In the Mitcham Borough council minutes of 14th June, 1956, the road names were recommended:

Norwood News, 15th May, 1959, via the British Newspaper Archives. 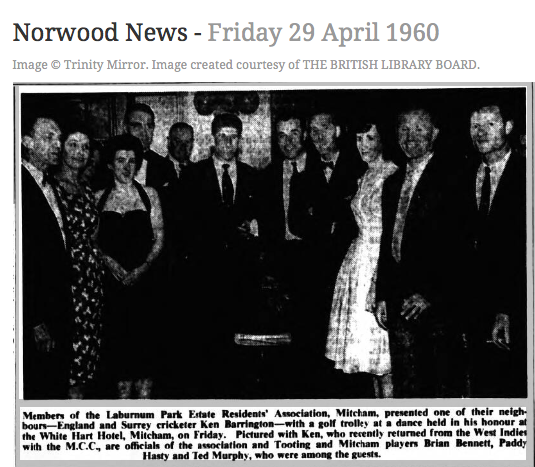 Members of the Laburnum Park Estate Residents’ Association, Mitcham, presented one of their neighbours – England and Surrey Cricketer Ken Barrington – with a golf trolley at a dance held in his honour at the White Hart Hotel, Mitcham, on Friday. Pictured with Ken, who recently returned from the West Indies with the M.C.C., are officials of the association and Tooting and Mitcham players Brian Bennett, Paddy Hasty and Ted Murphy, who were among the guests.