Leo’s Ice Cream bar was at number 317 London Road, next to the King’s Head pub. It was part of a block, numbered 317 to 321. Eric Montague said in his Mitcham Histories: 4 Lower Mitcham, page 130, that the block was demolished in 1977-80 and replaced by a building called Boundary House. Currently, in 2018, this houses the Job Centre.

Leo’s Cafe, was run by Lionel (Leo) Dimashio. He also had a fleet of ice cream vans, see the 1959 news item below.

The following family background is from a family tree on Ancestry.com by kind permission of Leo’s father-in-law’s granddaughter, who resides in Australia.

When Tommaso Perrotta arrived in the UK from Italy, he changed his name to Thomas Perrott. It was he who started the ice cream business. When his daughter Adelina married Lionello DiMascio in 1931, Thomas and Lionello went into business together and were life-long friends. Lionello changed his surname to Dimashio, and used Leo as his first name. Leo was born in Lanarkshire in 1905, and died in Italy in 1982, aged 76. 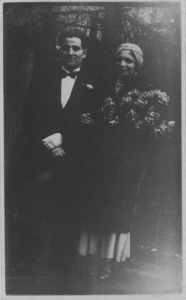 Leo Dimashio and his wife Adelina in March 1931

Chime gentlemen please – but do it quietly

THE battle of the ice cream chimes, which has been noisily raging for months in local estates, is likely to be a much quieter one — thanks partly to a Mitcham man.

The Ice Cream Alliance, to which about 95 per cent of Britain’s ice cream vendors belong, have issued a code of conduct which should lessen the complaints about musical vans — if
it is obeyed.

Mr. L. Dimashio, London Road, Mitcham, owner of a milk bar and a fleet of ice cream vans,
helped to formulate the code. He is a former president of the Ice Cream Alliance.
Now a member of the executive council, he said: “Some time ago we foresaw the annoyance that would be caused if the chimes caught on. But we did not reckon on it happening so fast.”

Most complaints about the chimes have been from local housing estates — particularly
Glebe Estate and Pollards Hill.

Mr. M. Hedden, Glebe Court Tenants’ Association official said:
“ Although it is winter there has been no real improvement as far as the noise of the chimes is
concerned.

“ But it is in the summer when we really notice it. Then about five different vendors practically race round the estate.

“I did not know the Alliance existed. In the event of further complaints I shall certainly con-
sider writing to them.”

The company who have come in for most complaints at the Glebe Estate are Eldorado Ltd — NOT members of the Alliance. But a spokesman said: “ We are members of another organisation which is preparing its own code of conduct.”

The Alliance code of conduct says:

Chimes or similar mechanism should be kept at a minimum after 7 p.m. They must be sounded while the vehicle is on the move and at not more than five-minute intervals.

The volume should not be excessive. Tunes should be limited to a few bars.

Horns or bells should be sounded only at a few moments each time.

Particular stress is made on not annoying hospitals, night workers and nursing homes.