1st : at Westhall’s grocery shop in the Broadway

It lists Joseph WESTALL as grocer and cheesemonger as well as the post office receiving house in Lower Mitcham.

2nd : in a small shop near Mitcham Station

This photo from 1895 shows part of the words ‘Post Office’ above the shop. 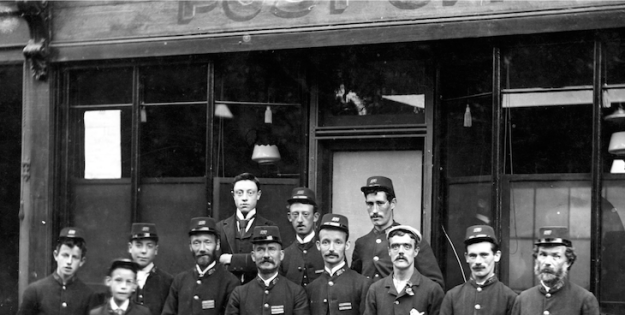 3rd : a purpose built building in the Broadway

The words ‘Post Office’ can be seen etched in the windows on the building on the right in this photo of around 1910: 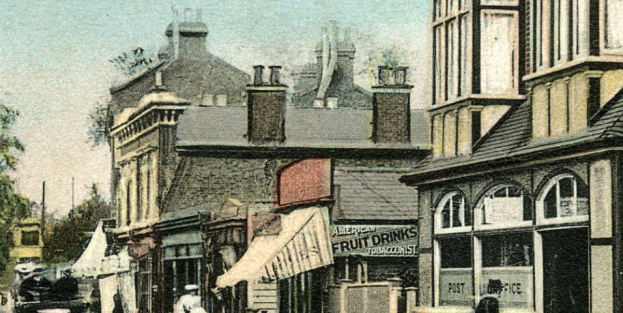 According to Eric Montague in his book Mitcham Histories : 4 Lower Mitcham, pages 127-8, this post office was

erected in about 1900 … a three-storeyed building … its rather fussy facade including false timber framing to simulate an Elizabethan structure.”

4th : Post Office and Telephone Exchange building on the corner of London Road and Elmwood Road 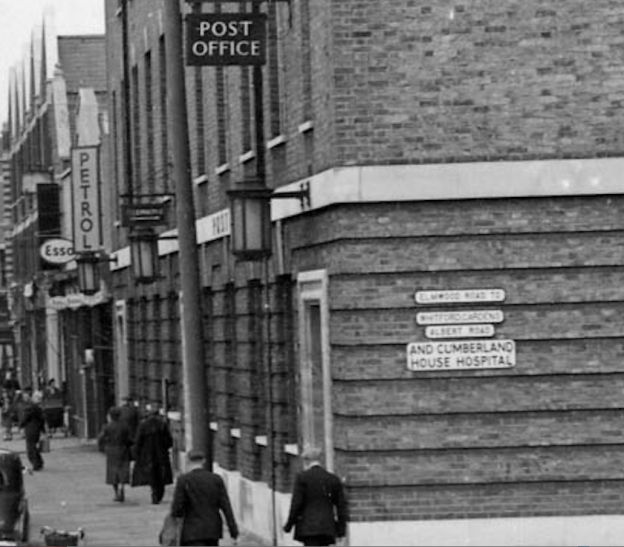 In 1961 the post office moved to Langdale Parade in the Fair Green. The telephone exchange building remains.

Currently, in 2019, the Langdale Parade post office has moved to a smaller shop nearby at number 5: 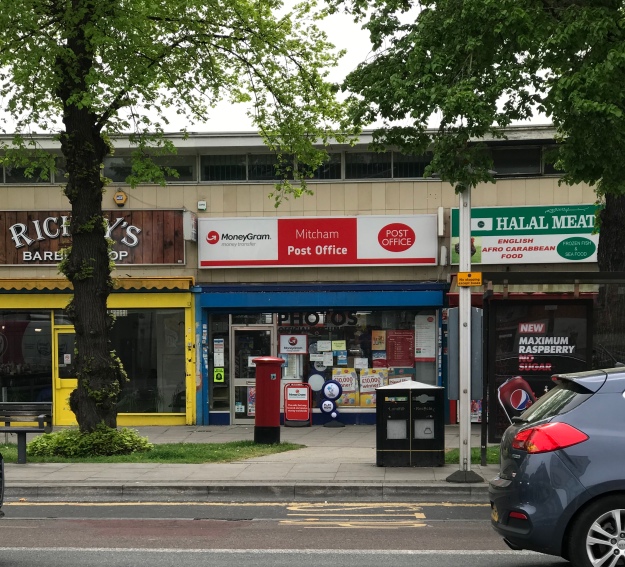 Grocer and sub-postmaster of Upper Mitcham from after 1901 to 1932. Listed in the 1930 commercial directory as 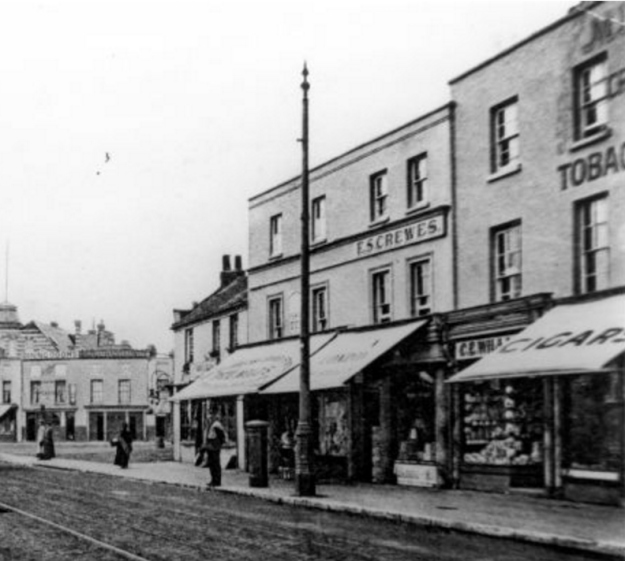 Edward Snell Crewes was originally from Cornwall, as he points out in a letter about eggs from that county he was selling at the post office.

In the 1901 census, he was listed as a grocer and they were living in the parish of Tong, in Bradford, Yorkshire. They had a daughter aged 2, called Millicent M. A public family tree on Ancestry says that Millicent Marjorie Crewes died in 1904 in Epsom.

In the 1911 census, he was shown as being 43 and having been born in about 1868 in Truro, Cornwall. His wife Lydia, also 43, was born in Mount Hawke, Cornwall and their son Stanley M B aged 15 also lived with them at the post office. He was born in Bradford, Yorkshire.

—We are sorry to learn that Mr. and Mrs. E. S. Crewes, of the Upper Mitcham Post Office, have this week sustained a bereavement which is unusually sad owing the circumstances related below. On Monday Mr. Harry Bennetts, Mount Hawke, Cornwall, Mrs. Crewes’ brother, died at his home there after being ill for some time from a disease know as miner’s phthisis,” which he contracted in South Africa. Mr. Bennetts was an experienced miner, having worked in the mines of Montana and Idaho, United States, for two different periods, and in the gold mines in South Africa. Last December while working at the Raudfontein South Gold Mine, Krugersdorp. there was an explosion of gelatine which caused the death of four miners by asphyxia, and Mr. Bennetts made a effort to rescue a number of native workers who had been overcome by the fumes. He descended to a depth of 200-ft. under circumstances which called for the greatest courage, and as a result his heroic action was reported the King, who, as stated, awarded him the Edward Medal. About three weeks ago he returned to his home in Cornwall broken in health, and although he had a fine physique, he succumbed to the disease which is the bane of all miners. No doubt it was made worse by his experiences in the mine after the explosion. An Interesting point is that neither the deceased nor his relatives were aware that the medal for bravery had been awarded him, and it is supposed that the medal must have been sent to his last known address in South Africa. Probably it is now on its way back to England. Mr. Crewes brought the facts to the notice of King George in a letter that be wrote to him on Tuesday.

To the Editor of the West Briton

— About three years ago you published letter of mine drawing the attention of farmers and dealers to the bad condition of new-laid eggs that were being for warded the Metropolis. To my great regret I must again write to tell your agricultural readers the very undesirable fact that large numbers of eggs which are absolutely rotten are being packed in cases labelled “English New-laid Eggs,” and sent in this direction from the delectable Duchy. One customer of mine to-day brought back three bad eggs she had out of ten, and several others have also expressed their disgust at my selling them as new-laid eggs. If sellers and senders in Cornwall could realise the damaging effect these things have and retail business in this part the country, they would be more careful and considerate, and not take money for new-laid eggs unless the eggs can honestly bear that designation. I appeal their sense justice, and ask them not pack eggs they have discovered in secluded spots on their hedges, without caring how long they have been laid.

Of late, eggs coming from Russia have been more reliable than those purchased from Cornwall, and at much less money. For the future I shall have to carefully examine all the Cornish eggs I sell. Being a Cornishman myself, I am very jealous of the good name of my native county. Trusting that the writing of this letter will have beneficial results.