A building of three floors of flats above shops on the ground floor. According to the Royal Mail postcode finder website, there are twelve flats numbered 1 through 12, with the address 288A London Road, all with the postcode CR4 3NB.

The name comes from Deseret, the provisional name for the state of Utah, according to wikipedia. 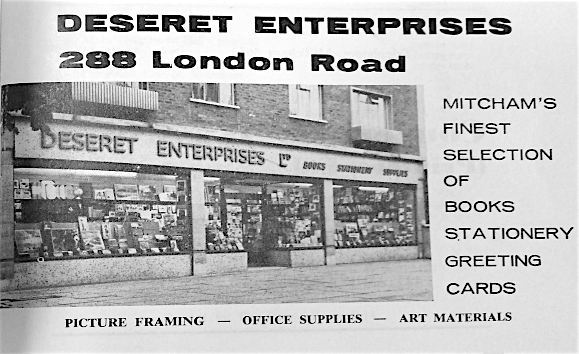 DESERET Enterprises Limited, which is owned by members of the Church of the Latter Day Saints, or Mormons, opened their first bookshop in England at London Road, Mitcham, on Tuesday.

The building houses a great variety of books not necessarily associated with the church, and is Mitcham’s first shop specializing entirely in reading matter.

The building “Deseret House” has three storeys. The ground floor, is composed of a library of books and shelves of stationery. At the rear of the main room is the manager’s office and a smaller book room containing books mainly connected with the church.

The storeys above contain 12 self-contained flats which will be let to local people. Elder Spencer Kimbal, a member of the church’s Council of Twelve, carried out the opening ceremony by cutting a ribbon across the door.

Before the doors were officially, opened the general manager of the new shop, Mr. Derek A. Cuthbert, welcomed members of the Mitcham Council and the Chamber of Commerce. He explained that it was hoped the premises would not only serve members of the Mormon Church in this country, but also the people in Mitcham.

Deseret Enterprises Limited was first registered in September and all the shareholders are members of the Mormon Church although not necessarily Americans.

The church has always had a book department for members but as the church has developed the need for a separate organisation has been felt.

The company shareholders decided the new shop should serve the general public. This is, in fact, the first commercial activity of the company in this country. They are the leaseholders of the premises.

The shop will be staffed by English members of the church and the general manager, Mr. Cuthbert, comes from Nottingham.

The ceremony was attended by a second member of the Council of Twelve, Elder Howard W. Hunter.