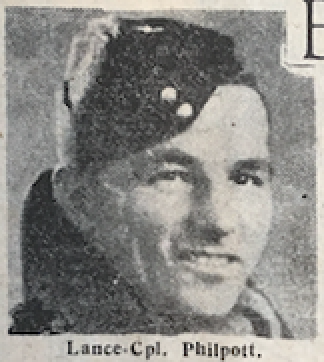 Lance-Corporal George Philpott, Riverside Drive, London Road, Mitcham, a tailor’s cutter and trimmer at Gieve’s, Piccadilly, before the war, now wields a blacksmith’s hammer at Suez, and has Egyptian strikers, whose only language is Arabic, at his anvil.

In peace-time he was a keen motor and polo cyclist, and hoped to get a job as despatch rider when he joined the Army, but they sent him to Longmore to train as a blacksmith. Later, he worked at Wilmot, Newport and London. While working at the Albert and King George V docks London, he claims to have had a wonderful time, because he was so near home, and able to visit his father and brothers frequently.

Of his job Lance-Corporal Philpott says: ”It’s interesting work, and I quite like a change, but I shall go back to my own trade after the war. Only, maybe, If I get absent-minded, I might begin to cut clothes with a hammer and chisel.

DANGER AT THE DOCKS

“We came to the Middle East in May, 1942,” he said,” and I was posted straight to Suez, where we are now. When the push was on a detachment of us went to Mersa Matruh and Tobruk, to work on the docks there. We repaired cranes and installations destroyed by the Germans before they left. There were air attacks when we were at Tobruk and at Benghazi. Most of the troops were quartered outside the town, but we got the full benefit, because we had to stay right on the docks, and whenever a ship came in, the attacks were redoubled.”

Lance-Corporal Philpott is in charge of the blacksmith’s shop for his present Company, and has Egyptian strikers at his anvils. Language is something of a difficulty but he has picked up enough Arabic to make himself understood, and he can give measurements in Arabic. Work is hard and the climate difficult, being very hot, indeed, in summer; but pressure is less than it was when the Allies were invading Sicily. Then the Company worked long hours, and nobody got any off-day during the week.

“My Army experience has been interesting,” he says. “I have seen things I shall never forget. I do not regret my Army service for a moment.”

His brother, Frank, is also in the Middle East. He too was a keen motorcyclist, and was more fortunate than his brother, for he became a despatch rider. Their younger brother, Ronald is a member of Mitcham Army Cadet Corps.

L-Cpl Philpott, a member of Tooting Cycling Club, was one of the club’s top scorers. He played in their bicycle Polo team and holds several medallions awarded for his part when the club won competitions. His brother, like his father, is a keen racing cyclist, and won several prizes on the road; he held the 25-mile record of the Tooting Cycling Club in 1931, his time being 1 hour 3 minutes 53 seconds.

The 1939 Register shows the occupants of 62 Riverside Drive:

A relative on the Facebook group Mitcham History wrote “As he and his brother Frank volunteered for service, they both thought that their skills in civilain life would be put to use. Instead they were both posted to North Africa. George was trained as a blacksmith, somewhat different to a military tailor! He was posted to the London Docks to repair cranes, then was shipped out with them.”