Road that is numbered as the A239 and runs south east from the junction with Madeira Road and Cricket Green, over the railway line at Cranmer Bridge and ends at the Carshalton Road.

It is named after the Cranmer family who lived in the area and the house called Cranmer.

All buildings are the south side of the road as the north side is part of Mitcham Common. 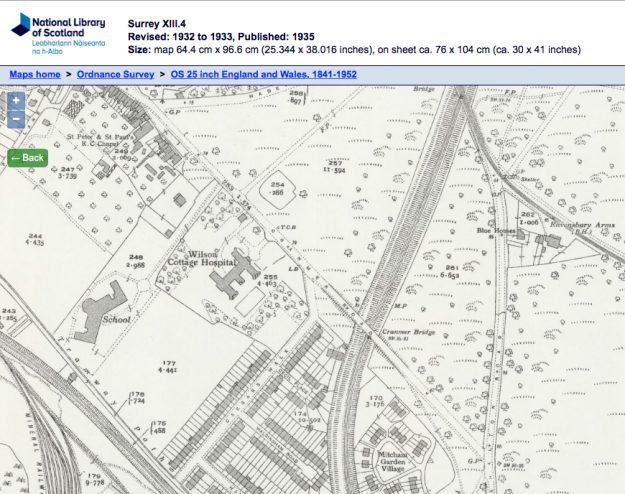 From the junction with Madeira Road towards Carshalton Road, the properties are:

This is locally listed by Merton Council who say:

This is a substantial church and an attached two and a half storey house in the same general style. The buildings date from 1889, and were designed by the architect Frederick A Walters. The materials used include a yellow brick, with blue brickwork detailing, and roof tiles. The design of the building does not relate to that of any others in the vicinity. The side elevations of the church have 5 bays with buttresses, inset windows with semi circular heads under a brick arch with a linking string course at springing level and a continuous string course at sill level. The street elevation has a central ceramic medallion over a semi circular headed entrance, and within the gable an arch, crossed keys and cross picked out in blue bricks. The bell tower has exposed bells within its arches. The Presbytery uses matching brick and roof tiles. 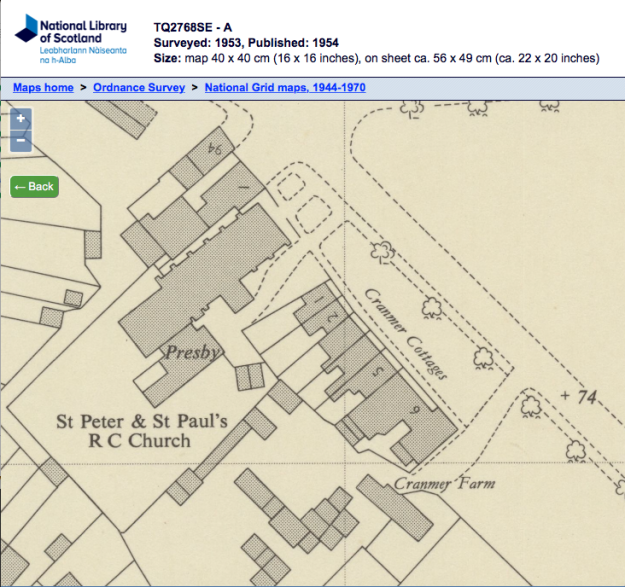 Numbers 3/4/5 are described by Merton Council as

This is a terrace of 3 x 2 storey cottages. They appear to date from the 18th century
(possibly early 18th century). The buildings are a reminder of the old Cranmer Estate
now largely occupied by the Wilson Hospital. The architecture is very plain and
simple, with small 12 pane sliding sash windows with only a very shallow reveal
(suggesting a possible early date). The building materials are render with a plain tiles
roof. No substantial alterations are evident. The properties (together with nos 6/7
Cranmer Cottages) have a group value not so much from the point of their design but
more from their common history linked to the Cranmer Estate.

Numbers 6 and 7 are listed separately as:

This is a non symmetrical pair of semi detached cottages, partly 2 storey and partly
single storey. They are understood to date from 1902. The design is neo vernacular.
The materials used include red brick to the ground floor and pebbledash to the upper floor and gable. The main features of interest are the well detailed timberwork to the lintels of the ground floor window and 1st floor window at no 6, and the metal decorative motif within the gable of no 6. Number 7 is a very small scale house, single storey only, with 3 round headed window openings on the SE elevation and on the larger window on the front elevation. The 3 window frames on the SE elevation have unfortunately been replaced. The properties (together with nos 3/4/5 Cranmer Cottages) have a group value not so much from the point of their design but more from their common history linked to the Cranmer Estate.

A housing development built on the former Cranmer Farm. 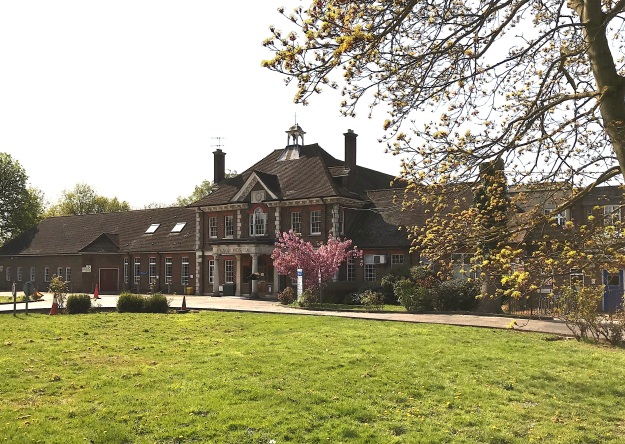 This is locally listed:

This is a part two and part single storey building, which dates from 1928, and which
was designed by the architects Chart Son and Reading. It was endowed by the local
benefactor, Isaac Wilson. The design of the building is classically inspired with a
steeply pitched roof, twelve panel timber sash windows, and a stone central portico
supported on pillars and pilasters. Stone quoins define the corners of the central two
storey section of the building, and the eaves display strong modillion detailing. Above
the portico is a palladian window, with a modillioned pediment feature above that,
and a centrally placed copper cupola on the roof. The wings to each side are of lesser
interest.

After the railway line is the

This development consists of 10 terraces each containing 4 two storey houses,
together with 2 pairs of similar semi detached houses. The development dates from
between 1929 and 1932. The architectural style of the development is influenced by
the vernacular revival, based on the Tudor period. This development was originally
conceived by a local benefactor, in order to cater for the needs of local elderly people.
The materials used include brown brick, some laid in panels of herringbone, Tudor
style timber frame with pebbledash render between at the gables, dormer windows
and porches, and roof tiles. The development as a whole has a very strongly cohesive
feel that results from the uniform architecture, and the layout of the buildings around
varied communal open spaces. The main features of interest include the first floor
jetties projecting beyond the ground floor, the very pronounced gables (including
dormers and porches) with their steeply pitched roofs, and the massive chimneys. The
overall layout of the development is also of interest, including in particular the
grouping of the buildings around green spaces of various sizes. Changes have been kept to a minimum, and have not undermined the cohesive architectural character of
the buildings.

The descriptions quoted above are from the Merton Local List Descriptions, 2018 (pdf)