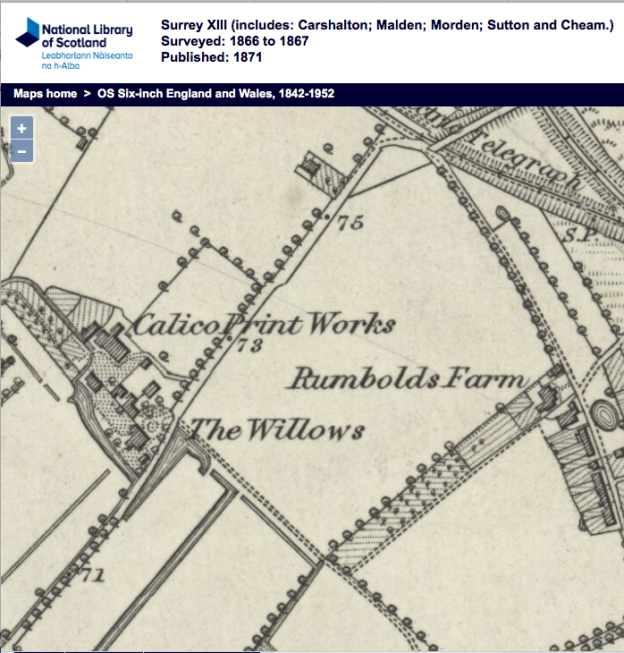 Farm house and land off west side of Carshalton Road, on part of what is now the Willow Lane industrial estate. Also known as Rumbold’s Farm or Rumbold Castle, it dated back to the 17th century.

As reported in the London Evening Standard – Saturday 16 February 1861, the Great Ormond Street Hospital, which had been established in 1852, used its Samaritan Fund to obtain for convalescing children

the renovating influence of sea and country air, and in a large measure the committee were indebted for the opportunity of doing this to the kindness of two friends of the charity, one of whom, at Brighton, undertakes the entire cost of the Home which she has established there, whilst Lady Harding receives the children at a moderate charge of Rumbold’s Farm, Mitcham, a home founded by and still under her management.

The archivists at Great Ormond Street Hospital said that from 1869, the Hospital for Sick Children had its own convalescent home at Cromwell house in Highgate, but prior to that, after opening in 1852, they used the Mitcham home run by Lady Harding and another private home in Brighton. From 1927-83 the hospital had a larger ‘Country Branch’ further out in Surrey at Tadworth Court, which continues to operate today as a charitable trust providing respite care services for children. 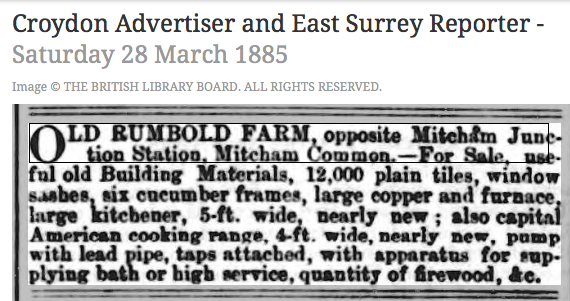 Tom Francis took a photo of the farmhouse, which can be seen on Merton Memories.

This establishment was opened on New Year’s Day for the occupation of the inspectors, sergeants, and the single members of the Mitcham police force; as well as for the safe custody of any prisoners whose unfortunate lot it may be to be conveyed thereto. The police station stands on the site of the ancient dilapidated building formerly used for the transaction of police business at Mitcham. It has a neat and modest appearance, and is built of red brick, with stone facings. The entrance door is made of oak, which is reached by small flight of stone steps. On entering a well fitted and arranged office for the inspector is situated on the left, while to the right is the waiting room. To the front of these two rooms is the charge room, and in close proximity to this are the cells, well ventilated, and fitted up with all the latest improvements and conveniences allowed prisoners.

On the first floor in the front of the building of quarters for one married Sergeant, who will, as a matter of course, live on the premises with his wife and family. The quarters consist of two commodious bedrooms, kitchen with cooking range, and other useful appliances, pantry, and wash house with plate racks, shelves, sinks, with water connection. Every regard to comfort and health seems to have been paid and construction of these rooms.

At the rear of the building is the section house on the ground floor for the accommodation of six single constables who will in future live and sleep on the premises instead of lodging different parts of the parish as heretofore. The section house comprises a day-room with library, clothes-room, boot cleaning room with a small locker for each man’s brushes. The dormitory contains six bedrooms, fitted up with hot and cold water baths, is in the top storey of this portion of the building which forms one of the most complete, comfortable, and well arranged to police stations in the county.

The builders were Messrs. Lathey Bros., Battersea, and the work was completed in March of last year.

Off of Commonside East, today a footpath that leads to corner of Baker Lane and Gaston Road.

In this 1974 photo from the Collage collection, the footpath is where the white van is parked. Click on the link to zoom in.

1885 theft of vegetables from Mr Slater

— On Monday, at the Croydon Petty Sessions, before Mr. Edridge and the Mayor, Fredk. Hazle, of Lavender-walk, Mitcham, was charged with stealing some brocoli and cabbages from East Fields, the property of Mr Slater.

– Prisoner admitted taking the greens, stating that he did so to sell them and get some bread with.- Mr. Edridge told him he knew full well that there was a relieving officer in Mitcham whom he could go if he was in want.

— P.-c. Stratton stated, in answer to the Bench, that he had known prisoner for ten years, and the police had received many complaints of his thieving habits.

– In reply to the Bench, Mr. Slater, the prosecutor, said he didn’t want the money which the magistrates offered to return him as the value of the vegetables.

— Mr. Edridge: Shall we keep it for the poor box ?

— Mr. Edridge : That will make a beginning; there’s nothing in it at present. Thank you.

Henry Thomas Wadsworth, of Lavender-walk, Commonside, Mitcham, and John Hazel, of Mount Cottage, Mitcham, both lads, were charged on summonses taken out by Inspector Howland, of the London, Brighton, and South Coast Railway, with throwing stones a train. A policeman deposed that he was on duty at the Beehive Bridge, Mitcham Common, when he saw the defendants throwing stones a passing train. One of the missiles struck the train, and another one fell short. Witness went up to the lads and asked them why they had thrown the stones, and they replied, ” Only for a game.” Upon that he took their names and addresses, and reported the matter to the railway authorities.

— In reply to the Bench, the defendants denied that either of the stones hit the train ; they fell on the bridge.

— Mr. Edridge, the chairman, said the charge was a most serious one, and, as a warning other lads, the defendants would be remanded in custody for a few days.

— Before Mr. T. R. Edridge. To-day the defendants were brought up from the House of Detention, and the Chairman discharged them with a caution.

Edgar and John Mantell operated the Mitcham Brewery, London Rood, Mitcham, Surrey, until 1877 when it was taken over by John Dalton Mantell, followed by Thunder & Little in 1884. Thunder & Little Ltd was registered in September 1895 as a limited liability company to acquire the business. The company acquired Edward Boniface, Cheam Brewery, Cheam Surrey, in 1898 and changed its name to Mitcham & Cheam Brewery Co Ltd. It was taken over by Page & Overton’s Brewery Ltd, Croydon, Surrey, in 1917. The Cheam Brewery closed in that year and the Mitcham Brewery ceased brewing in 1914.

Francis Thunder is shown in the 1900 electoral registers.

1898 Mitcham and Cheam Brewery formed to takeover Thunder and Little

The Mitcham and Cheam Brewery Company (Limited) is formed to take over and combine the businesses of Thunder and Little and of Edward Boniface, brewers, the one at Mitcham and the other at Cheam. A Share capital of £50,000 is to be created, in £5 Shares, half of which will be Cumulative Preference Shares, and the whole of it goes to the Vendors, who also accept £40,000 in cash in payment. An issue of £50,000 in Four-and-a-Half per Cent. First Mortgage Debenture Stock is offered to the public at par in multiples of £10.

A subscription is required to view these articles on the British Newspaper Archives website.

— On Saturday last about 40 of the employees of the Mitcham Brewery assembled at 7 a.m., and after partaking of what they chose in the way of liquid refreshment, proceeded to Mitcham Junction, whence they travelled by special train to Portsmouth, arriving there about 11.45. After a hearty lunch at Maybour’s Restaurant at Portsea the dockyards were visited. A steam yacht was then chartered, and the party went for a two and a half hours’ trip skirting the Isle of Wight. Returning to Maybour’s they sat down to most excellent dinner, the expense of which, indeed was the whole of the outing, being borne by the firm. “The first-class spread” having been done ample justice to, toasts, songs, etc., followed until time for the return journey at 7p.m. Arriving at Mitcham Junction in good time, the company adjourned to the White Hart Hotel, and there brought most enjoyable day of pleasure to a harmonious finish.

—At the Croydon Petty Sessions on Saturday last, Frederick French, of Aberdeen-terrace, Mitcham, was charged, on remand, with embezzling 18s. 6d., the moneys of his employer, Mr. J. D. Mantell, brewer, of Mitcham.

—The defendant pleaded guilty, and said he hoped the Bench would be lenient with him on account of his wife and family.

— Mr. Dennis, who represented the prosecutor, said the defendant should have thought of his wife and family before. It unfortunately happened that this was only one amount of prisoner’s defalcations out of between £30 and £40.—The Bench sent prisoner to gaol for four calendar months.