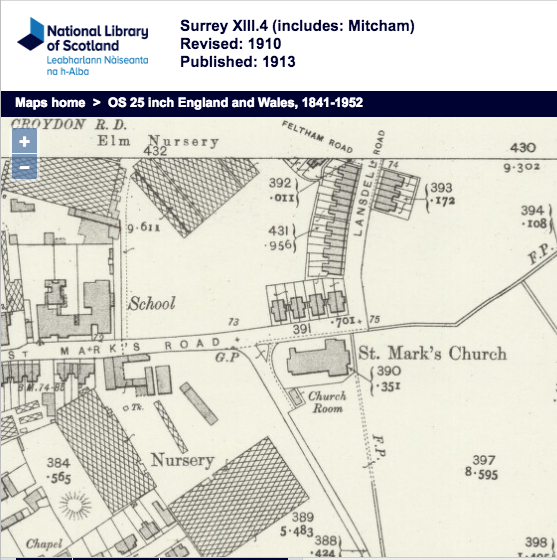 According to Eric Montague, in his Mitcham Histories: 7 The Upper or Fair Green, page 111:

The district of St Mark, which covered most of the electoral east ward, was previously part of the parish of SS Peter & Paul, Church Road. It became its own parish in 1905.

It is part of the diocese of Southwark, whose website says:

The church is built of soft red brick with Bath stone dressings and red/orange machine-made, plain clay tiles. There is a copper covered fleche with bell.

The copper at the base of the pointed spire (or ‘fleche’) has become green due to weathering.

from the Academy Architecture and Architectural Review, volume 41, 1912, page 12. This shows the north aisle (on the left in this view) that wasn’t built.

On Saturday last the Lord Mayor, accompanied by the Sheriffs, drove down in state to Mitcham in order to lay the foundation-stone of the new Church of St Barnabas, which will be used in connexion with the City of London; School Mission. The service was conducted by the Bishop of Southwark, the Rev. E. J. Baker, the Mission priest, reading the Lesson. The Mission, which is conducted largely by the old boys of the City of London School, has been in existence for six years, and has done excellent work in this rapidly growing artisan area.

The new church, which will occupy a site in Gorringe Park, will have seating accommodation for 830 persons. The cost will be about £10,000, and £3,000 are still wanted, towards which £7,000 have already been contributed by public grants, funds raised by the School Mission Committee, and by the South London Church Fund. The raising of the remaining £3,000 is a matter of some concern to the Building Committee, The Bishop of Southwark expressed thanks for the generous sympathy, encouragement, and support of all connected with the City of London School. The Lord Mayor said that when the school decided to have a mission of its own it chose Mitcham, recognising that so many of the workers in the City resided there. Dr. Chilton, head master of the school, expressed thanks to the Lord Mayor, who has consented to receive at the Mansion House further contributions to the fund. The school Cadet Corps formed a guard of honour during the proceedings.

Probably delayed due to WW1, the church wasn’t built until probably 1918. 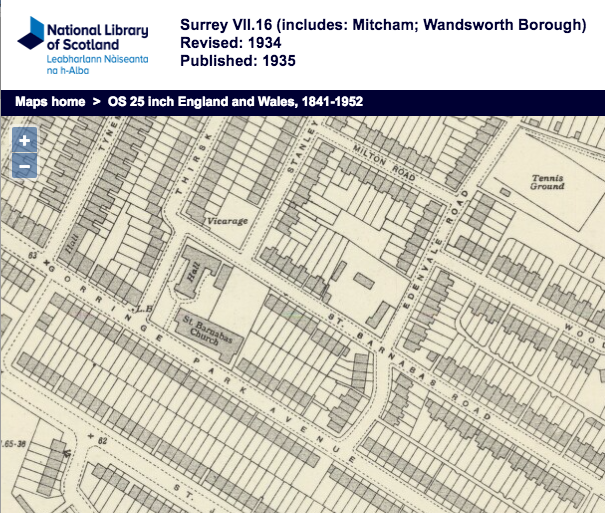