Cricketer who made 82 appearances in first class matches in the 19th century.

Born in Mitcham on 1st December 1825, his father James Sherman was also a cricketer. He died 10th October 1911.

A letter dated 30th November was published in the The Sportsman of Thursday 1st December 1904:

I thought it would be of interest for you and others interested in cricket to know that Mr Tom Sherman attains his seventy-ninth birthday to-morrow. He is the oldest Surrey cricketer, and has the unique distinction of having played continuously for fifty years. His health haring quite failed him, and circumstances for this reason being anything but comfortable, I would be glad if something might be done to make his position a little more comfortable during the winter months. I feel quite sure that some of the older generation who knew him in his famous bowling days would willingly help him if they knew his position.

His obituary was reported in the Croydon Guardian and Surrey County Gazette of Saturday 14th October 1911.

The death of Tom Sherman, of Mitcham, who succumbed at Croydon Hospital, Tuesday, after breaking his leg at Mitcham, leaves William Caffyn the only survivor of a great band of professional cricketers who were in their prime nearly sixty years ago.

In “Scores and Biographies,” Sherman, who was born 1827, is described the as the fastest bowler of his time, and himself recalled the fact that in one of Surrey matches against Yorkshire at Sheffield he broke stump into five pieces. For this feat an admirer gave him a case of razors.

For the greater part of his long life, says “Unknown” in the “Morning Leader,” he lived at Mitcham, one of the famous nurseries of the game, and it was on the village common nine years ago that I last saw Sherman, on the occasion of his annual benefit. It may the vanity of old age to compare the present with the past to the disadvantage of the former, but I remember the wrinkled veteran as very emphatic in expressing an opinion that the bowling in his time was a great deal faster than that of modern days. In the matter of physical power, he believed that Alfred Mynn and himself were considerably ahead of latter-day bowlers when it came to question of pace. “This right knee,” he said, ” was put out as result of a scorching ball from Mynn. and it has never been right since.”

Sherman played for Surrey during eleven or twelve seasons with Julius Caesar, Caffyn, Lockyer, Martingell, and Mortlock. Sherman never bowled against Dr. W. G. Grace, but the man for whom he had the greatest respect as a bat was Fuller Pilch. Sherman dropped out of county cricket when his county were at their best, taking scarcely any part in the great things achieved by the Surrey team under Mr. F. P. Miller, who led the side to victory against All England in 1861. Appearing at Lords in 1846, Sherman met with most success in season the of 1850 and 1851, taking 99 wickets in the course of ten matches during two years. This was before bowling analyses were taken. Described as one of the fastest round-arm bowlers, he earned fame as a contemporary of Alfred Mynn, Fuller Pilch, George Parr, William Caffyn, Felix, and Martingeil. Two months older than Caffyn, Sherman was the oldest professional cricketer living.

From the Croydon Advertiser and East Surrey Reporter – Friday 28 July 1939 via the British Newspaper Archives, which requires a subscription.

An all-women cricket match was played on Mitcham Green, on Wednesday, for the benefit of the Mitcham Cricket Club funds. The teams were Surrey v. Herts, and District. Surrey won the game easily. Their innings was notable for a fine batting display bv Miss Molly Hide, who retired after scoring 54 runs. Miss W. Lambert was the second highest scorer, with 27. Miss M. MacLagan, the captain, contributed ten in a total of 137. Herts, scored 57.

The early part of the day was gloomy and comparatively few spectators were present. In the evening about two thousand people ringed the green. They were generous with their applause of the performances and they thoroughly enjoyed the game, which was played in first-class style and in the best sporting spirit.

Lunch was eaten at the White Hart Hotel, where the visitors were welcomed by Mr. Jack Pillinger on behalf of Mitcham Cricket Club, Mr Charles Sanders and Mrs. Sciaretta were other members of the club present. A spray of Mitcham lavender, the gift of Mr. Tom Francis, and a copy of the Mitcham Club handbook were presented to each player. The umpires were Mrs. Tabor and Mr. H. Thompson. An excellent pitch, a bit sticky at the beginning of the game, was prepared by Groundsman Tom Sturtivant.

From the Croydon Advertiser of Saturday 21st July 1877, from the British Newspaper Archives, which requires a subscription.

These clubs met again on Lower Green, Mitcham, on Tuesday and Thursday mornings last, between the hours of 4 and 7, to play the return match.

The “Peep o’ Days” played (with the exception of two) the same men as in the previous match, but as the Early Risers were defeated last time, they naturally thought it advisable to take a little stringer team. But the battle is not always to the strong.

Play being resumed on Thursday, the “Peeps” played a comfortable innings of 104. Time did not permit the “Earlys” to complete their second innings. It is hardly necessary to add thgat the game was very exciting, especially as the “Peeps” have been successful in their determination to give the “Earlys” a “drubbing.”

The game was gained by the “Peeps” as the result of the good bowling of A. Gibbard and S. Hubbard. 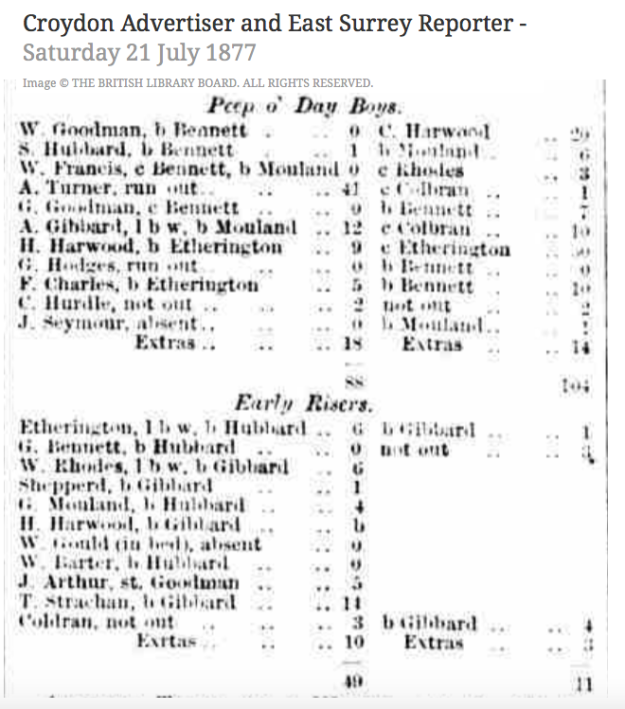 Interview with the secretary of the Mitcham Cricket Club, Julia Gault.

(From Tomahawk.)
What the Early Bird Catches.

The Mitchamites are not to be found napping. At all events, they possess two separate associations for getting up at daybreak, namely, the Upper Mitcham Early Rising Association and the Lower Mitcham Peep of Day Club.

The rival societies played a cricket match last week on their common, when the stumps were pitched at 3.30 a.m. and drawn at 7 a.m. The players must have been determined that their pleasure should not interfere with their duty, but at what time did they go to bed, and how fit were they for their several occupations by noon?

Getting up early is very well in its way, but — like those who practise it in immoderation — it can be “done to death.” As the song has it,
Early to bed and early to rise,
Makes men lazy and increases their size.