MITCHAM, Surrey, close to Lower Tooting, and near Streatham and Croydon.

—To CAPITALISTS, Freehold Land and Building Societies, Market-gardeners, Medical Herbgrowers, and Others.—Valuable and extensive MANOR, with FREEHOLD and COPYHOLD PROPERTIES, nearly all land-tax free, comprising the remaining portion the estates of the late James Moore, Esq.

—Messrs. CRAWTER are favoured with instructions from the Devisee in Trust for Sale (and with the consent of the Mortgagee) to offer by AUCTION, at Garraway’s Coffee-house, Changealley, Cornhill, London, on MONDAY, Aug. 29, 1853, and two following days, at One precisely each day, in about seventy convenient lots, Nearly Three Hundred and Fifty Acres of superior LAND (part with brick earth), several buildings, consisting of a spacious Silk Printing Manufacturing Premises, with capital residence attached. The Prince of Wales Public-house, sundry Houses, Cottages, Brick Field, and Homesteads; very desirable Family Residence and Lands, known as Sherwood Farm; capital Wood, containing nearly 30 acres, well stocked with timber and underwood, and easily made a good game preserve.

And the extensive and lucrative Manor of Biggin and Tamworth, paying fines arbitrary, heriots, quit rents, tools, and appurtenances, with rights in and over the extensive common and waste. The situations of the estates are dispersed, but very eligible, being close to the church, Phipp’s-bridge, and road to Merton, Half Furlong, Blacklands, East Field, &c.; also on the high road from Mitcham to Morden, near the high roads to Streatham and Croydon, and part close to Lower Tooting.

All the land is in a high state of cultivation, of first-rate quality, particularly adapted to the growth of Medical Herbs (for which they were used by the late proprietor), and Market Garden Crops ; also productive Meadow and Pasture Lands, and several eligible Building Sites with extensive frontages, in a healthy improving neighbourhood, surrounded and adjoining to good roads, only eight miles from London, and three from Croydon Town. The whole of the value of upwards of £1,000 per annum, part being secured leases to responsible tenants, with reversions, and so near the metropolis, affords a rare opportunity to Trustees for investment, and is well worthy the attention of any capitalists.

The Croydon and Wimbledon Railway is about to be formed, and will pass through this estate; several of the most eligible lots will be within a few minutes’ walk of the proposed Station.

Possession of the greater part can be had at Christmas next. Particulars can be had 14 days prior to the Sale on application to T. E. Penfold, Esq., Solicitor, 42, Mecklenburgh-square; at Garraway’s; the King’s Head and Buck’s Head, Mitcham; the Greyhound, and Cock Inns, Sutton; principal Inns at Tooting, Merton, Corshalton, and at Messrs. Crawter, Surveyors, Land Agents, &c., 7, Southampton-buildings, Chancery-lane, and Cobham, Surrey.

A competent person will be employed to show the lands.

Road that currently connects Church Road (opposite Foxes Path) to Belgrave Road. On the south side of the road is a trading estate.

Previously the south side was the site of industrial works and the north side allotments with piggeries.

1910 OS map. The Distillery was W.J. Bush. Batsworth Road today continues to Belgrave Road across where the distillery was.

The connecting road to the south of the distillery was also Batsworth Road as shown in this 1952 OS map: 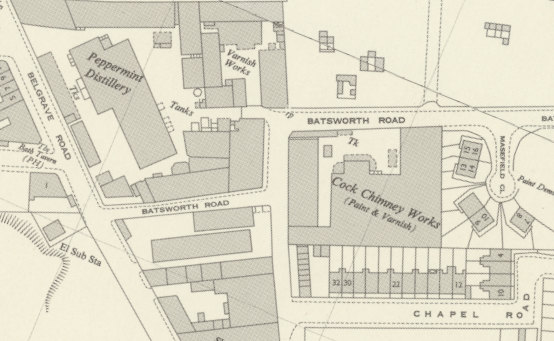 E.N. Montague in ‘Mitcham Histories: 8 Phipps Bridge‘, page 12, says that the Batsworth name can be traced back to the 13th century as the name of an enclosure of land. ‘Long’ and ‘Short’ Batsworth fields are mentioned in the sale of the estate of James Moore in 1852. They were part of the ‘Blacklands’ near Phipps Bridge, the colour alluding to the richness of the soil.

— To Capitalists, Market Gardeners, Medical Herb Growers, Agriculturists, and Others.

— Valuable Freehold and Copyhold Properties, nearly all land-tax free, comprising the Second Portion of the Estates of the late James Moore, Esq.

MESSRS. CRAWTER are favoured with instructions by the Devisee in Trust for Sale, to OFFER, at AUCTION, at Garraway’s Coffee-house, Change Alley, Cornhill, London, on WEDNESDAY, August 11 next, and following day, at
1 precisely each day, in 41 convenient Lots (giving Votes for the County).

Consisting of about 71 Acres of very Superior FREEHOLD and COPYHOLD LANDS, and PREMISES, situate dispersed in the Parish, lying near the Church, and in Church-street, and on the high road from Mitcham to Morden; also in Blacklands Fields, near Phipps Bridge, Long and Short Batsworth. Half Furlong, East Fields, &c., all accommodation land of first-rate quality, and in a high state of cultivation, capable of growing crops of every description, but particularly adapted for growth of medical herbs — (for which lands were used by the late proprietor), and market garden crops,
for which the locality has been long noted, with several eligible building frontages, in a healthy, populous, and improving neighbourhood, surrounded by, and adjoining to, good roads, only 8 miles fr London and 3 from Croydon Market-town, with a prospect of railway communication in the ensuing year, and the right to enfranchise the copyholds. N.B. — Possession can be had at Christmas next.

Particulars can be had 10 days before the sale of T. E. Pe????,
Esq., solicitor, 12, Mecklenburgh-square at Garraway’s; and the
King’s Head and Buck’s Head, Mitcham; the Greyhound and Cock Inns, Sutton; principal Inns at Tooting, Merton, Carshalton, Epsom, and Croydon; and of Messrs. Crawter. surveyors, land agents, &c., 7, Southampton-buildinga, Chancery-lane, and Cobhatn, Surrey. A competent person will be employed to show the lands.