From a public member family tree on Ancestry:

When William Carlton was born on October 29, 1860, in Mitcham, Surrey, his father, William, was 49 and his mother, Elizabeth, was 34. He married Frances Mary Harvey in May 1886. They had five children during their marriage:

In the 1911 Census, living at Lower Green East.

The last electoral Register was in 1934 showing him living at number 68 Lower Green East:

Note that this house was demolished, see Merton Memories photo.

He sold his house and the market garden, which totalled 8 1/4 acres, to a property developer, which developed it as Bramcote Avenue and Denham Crescent. 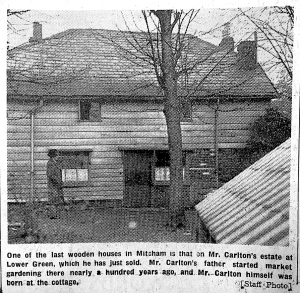