Terrace of three houses south of the Swan and north of Smith’s Terrace, marked in red on this 1911 map. 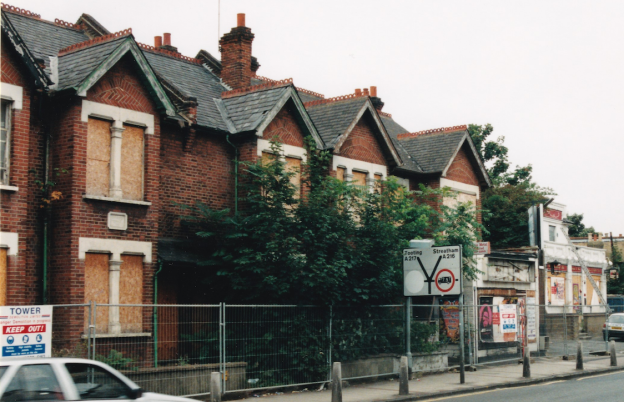 Photo taken in 1999, prior to demolition.

From the 1915 street directory, going south on the west side of London Road:

ADULTERATION OF MILK.
A LENIENT BENCH.

At the Croydon County Bench yesterday, James Thompson, of Oakwood Terrace, London Road, Mitcham, was summoned for selling milk adulterated with 12 per cent. of water.

Mr. John Martin, a Surrey County Council Inspector, stated that he stopped the defendant on Aug. 17 in London Road, Mitcham, and bought a pint of milk. This was divided, and a portion of it was analysed by Dr. Stevenson, who certified it to contain 12 per cent of added water, with a trace of boracic acid.

Defendant’s explanation was that he had run short of milk, and had borrowed twelve gallons from another dealer in whom he had such confidence that he thought he was acting quite safely.

The Bench took into consideration the Inspector’s report that he had previously found defendant’s milk genuine, and ordered him to pay 5s. costs.